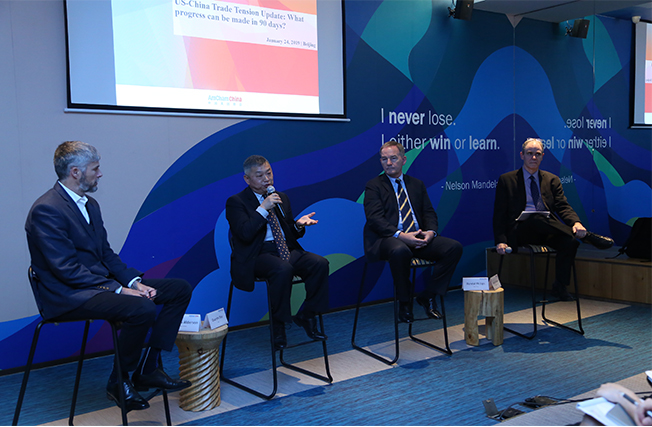 AmCham China’s Intellectual Property Rights Forum was pleased to host Duanzhi She, Vice President of Government & Public Affairs at Greater China at Nike Sports (China) Co. Ltd.; Randal Phillips, Managing Partner for Asia at Mintz Group; Mathew Alderson, Partner at Harris Bricken; and Patrick Powers, Head of Government Affairs at Rockwell Automation, Greater China and member of AmCham China’s Board of Governors for “US-China Trade Tension Update: What progress can be made in 90 days?” The event, moderated by Powers, discussed prospects for the 37 remaining days of the US-China trade war armistice and how the potential outcomes will affect American business in China.

“Chinese companies would benefit from an improvement in IP protection. The good news is the rising tide will lift all boats, but it will take a long time.”

Mathew Alderson kicked off the panel with his talk on “Intellectual Property Rights in the Entertainment Industry,” presenting an overview of Hollywood’s major concerns in China’s IP landscape. One grievance from owners of large copyright portfolios, for example a music label holding trademarks on many songs, is the impossible task of registering each song individually instead of collectively.  Additionally, the industry struggles with the high evidence standards China requires to prove copyright damages in lawsuits. Even when damages are found, China’s takedown system refrains from pursuing parties suspected to have committed large-scale theft past a single infringement. Overall, these IP concerns will require more attention than can be seen within the 90-day benchmark. He remained optimistic, however, as “Chinese companies would benefit from an improvement in IP protection. The good news is the rising tide will lift all boats, but it will take a long time.”

Duanzhi She, in his talk, “Intellectual Property Issues from the Perspective of a Brand Owner,” addressed concerns that American brands in China could face pending structural changes to IP policy. She was optimistic that a deal with strengthened IP protection could satisfy both presidents in the short-term but felt the long-term implications were more uncertain.

“The resolve of the US on this particular issue cannot be underestimated."

Randal Phillips explained that the US has no confidence in China’s promises after years of failed talks. In his presentation, “US Perspectives on Trade Conflict: A View from Washington,” Phillips said that “from the US side, this pent-up frustration has come from decades of discussions.” Washington, for once, is largely a united front on the issue of US-China trade after years of broken promises. As Alderson stated, “The resolve of the US on this particular issue cannot be underestimated." According to Phillips, “The attitude of the US is ‘just do it,’” and referencing a Chinese idiom, “Kill some chickens and then we’ll believe you.” Lack of trust towards China’s words without concrete results presents a substantial motive for the US to display strength in negotiations.

Finally, the speakers expressed opinions on what can realistically be accomplished in US-China negotiations. While China is willing to import more and reduce the trade deficit, these purchases were likely to happen anyway and are not a concession on Beijing’s part. In regard to opening up to market forces, the automotive and financial industries are competitive enough now to potentially allow for piece by piece commitments. When it comes to structural IP issues, however, dialogue may continue but compromise may be far-fetched. As Phillips put it, “I think that China would like nothing better than to write a check and make it go away.”

Overall, a broad-based deal with a lot of movement on both sides is not likely to happen in 90-days. The panelists agreed that the major question is what will be acceptable to China. They largely predict that a deal will be reached to reduce tariffs and address IP issues, at least on paper, but not one that will get to the heart of the tensions. A temporary truce based on verifiable enforcement and continued negotiations in monthly increments may allow the agreement to unfold, but if that stops, US-China tensions will deepen.