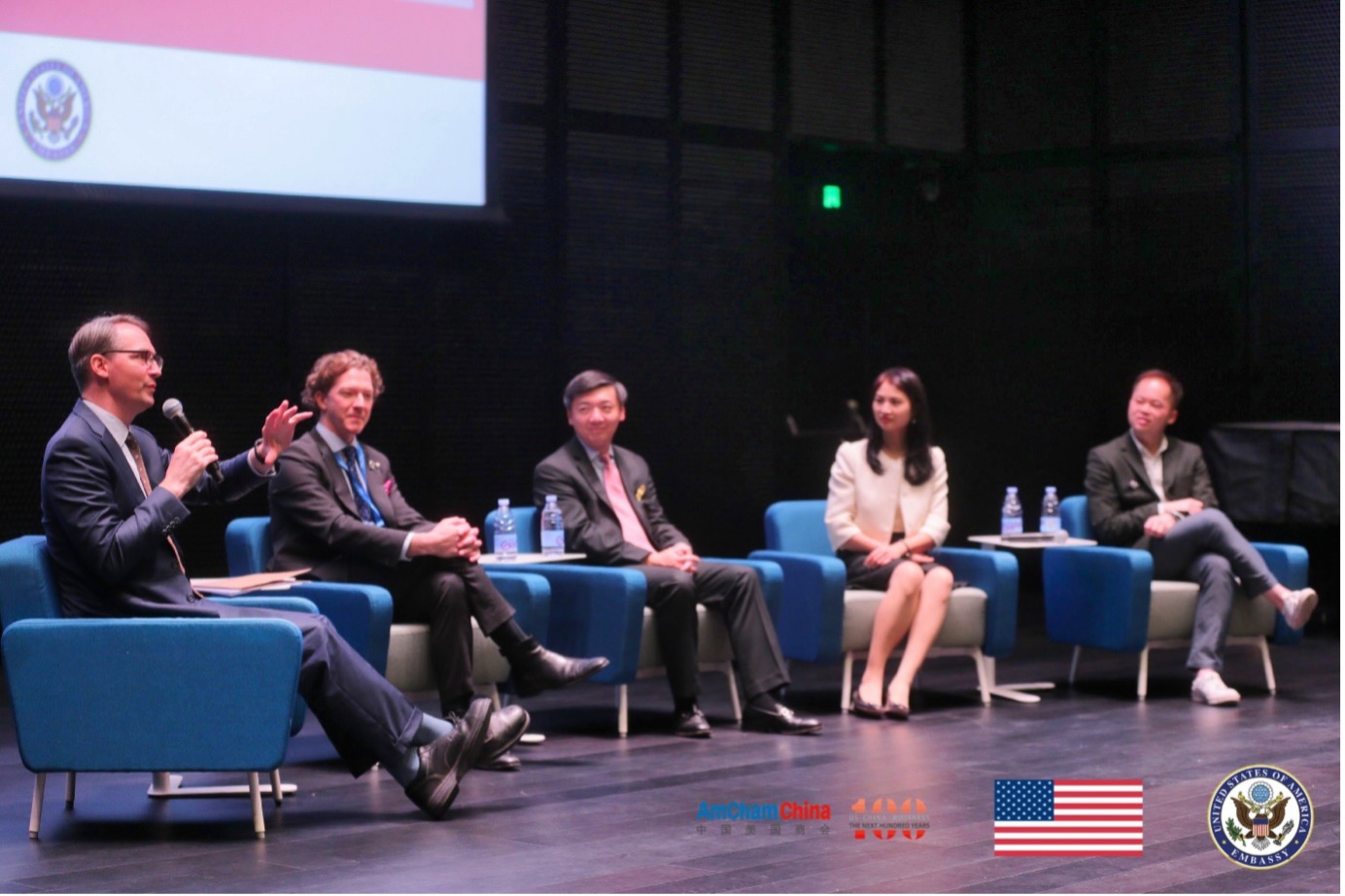 AmCham China hosted a day of activities to celebrate US-China educational exchanges with two events happening concurrently in Beijing and Tianjin on April 25. Education has long been a fundamental pillar of the US-China relationship, and participants throughout the day emphasized the importance of continued dialogue and partnerships between the two countries and their peoples in this important sector. Both events took place with the generous support of the US Embassy in China. 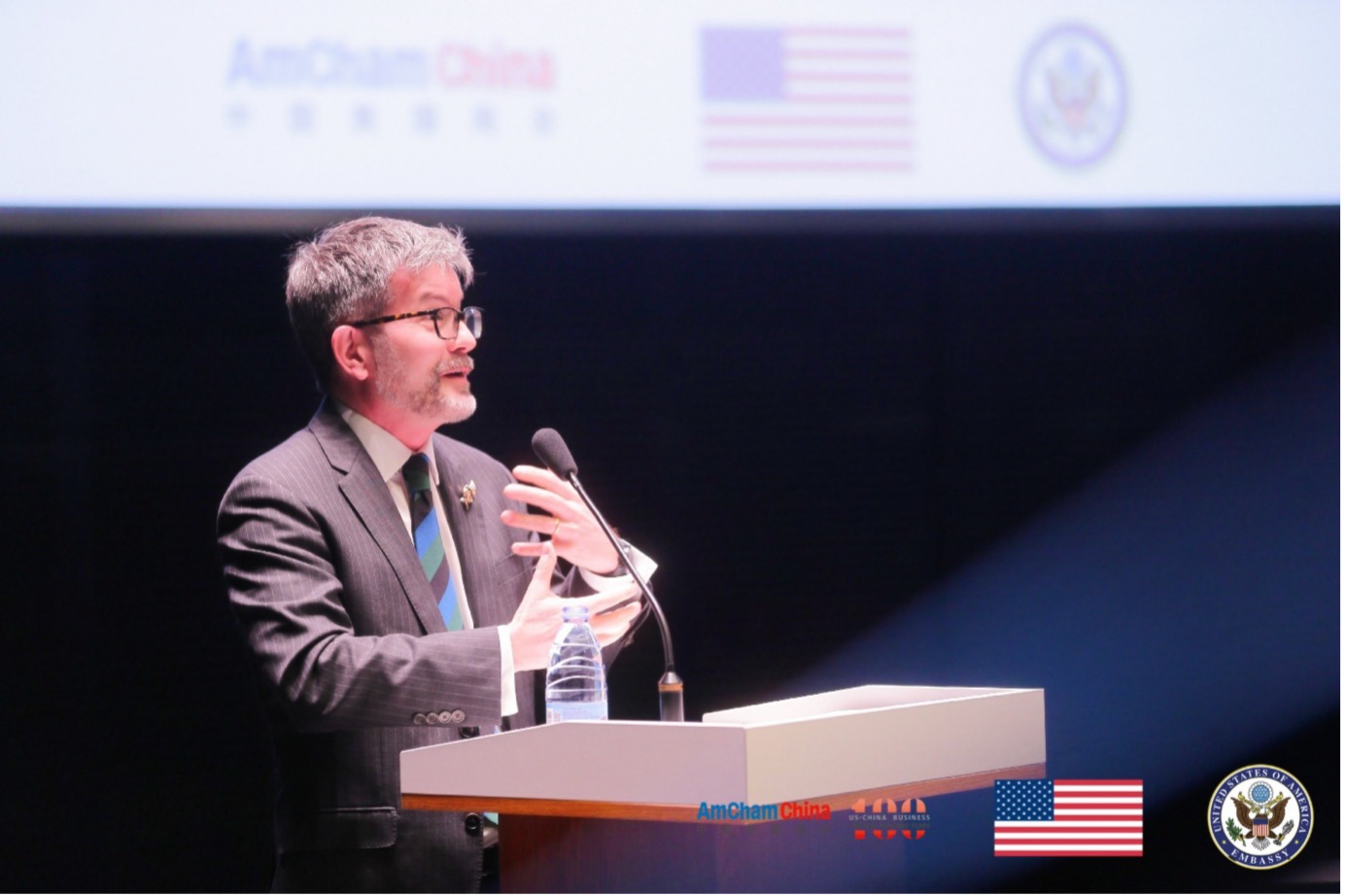 At the Tianjin Julliard School, AmCham China Tianjin Chapter Michael Hart opened proceedings, before introducing Jeffrey Loree, Counselor for Public Affairs at the US Embassy in China. Loree spoke about the importance of continued US-China educational exchanges. Having previously studied at Beijing University decades ago, he highlighted the amazing opportunities now available to both US and Chinese students learning the language of the other country. Loree also pointed out that it is currently much easier to study in, and travel to, the US than before. 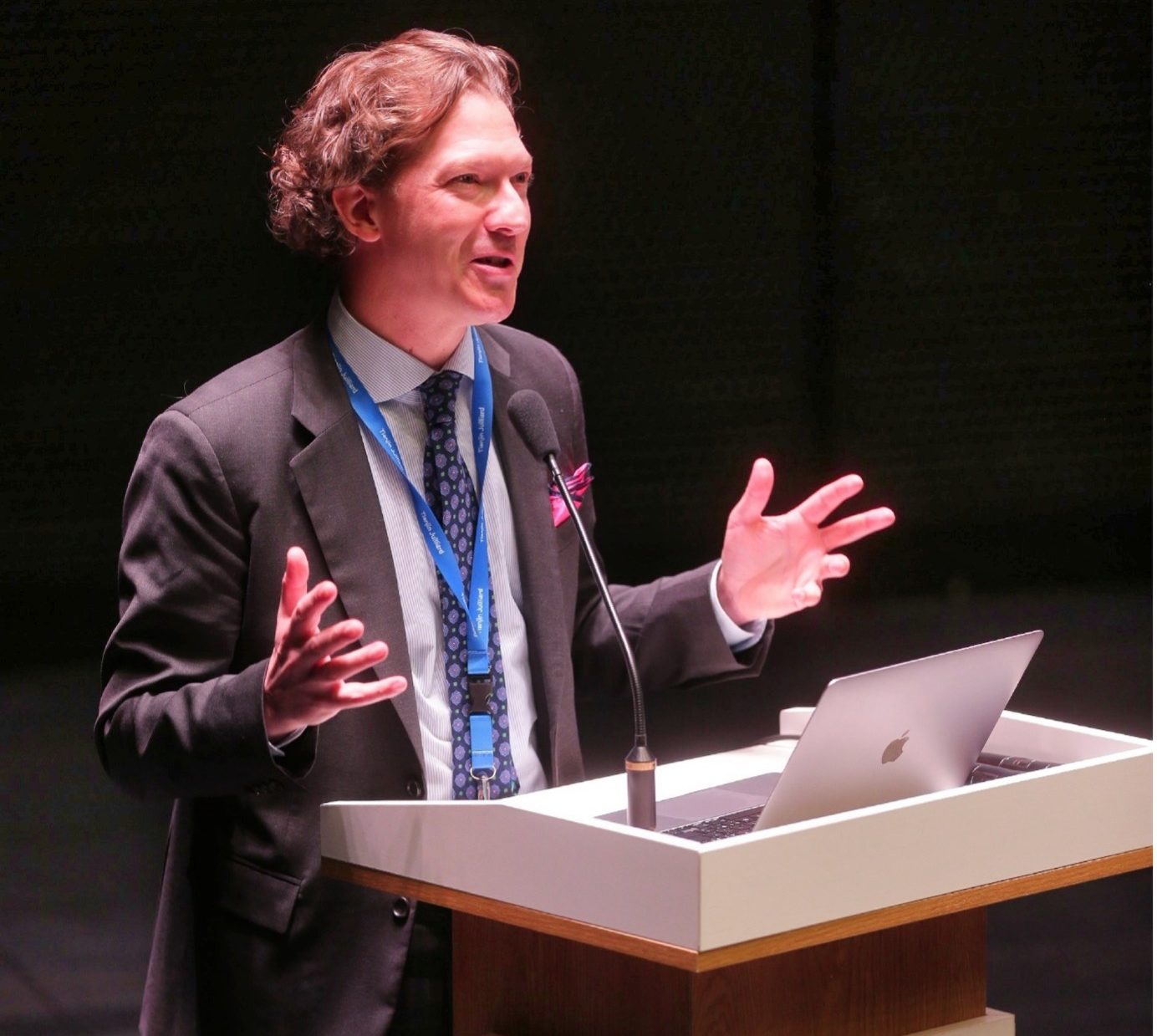 Alex Brose (pictured above), the Executive Director and CEO of the Tianjin Juilliard School, then introduced the school, dating back to September 28, 2015, when Madame Peng Liyuan, First Lady of China, witnessed the announcement of The Tianjin Juilliard School. The groundbreaking ceremony took place in June 2017, with the Tianjin campus becoming the Juilliard School’s first and only international campus, as well as China’s first degree-granting, joint-venture conservatory of music. Following a week last fall during which 124 Steinway pianos were moved in – the largest order of pianos that Steinway’s German factory had received in more than 60 years – the campus opened in October 2020. The resident faculty is composed of excellent artist-teachers, combined with distinguished visiting faculty from Juilliard in New York.

Next, Wang Yi, the Executive Director of the Harvard Shanghai Center, then spoke about the history of Harvard and China, citing the more than a century of engagement, dating back to the story of KoK’un-hua, who in 1879 became Harvard’s first Chinese teacher, two years before Ting Sung Kih became the school’s first Chinese student. Wang listed some other milestones, including the founding of the Harvard Chinese Club (1908), Harvard Medical School of China in Shanghai (1911), the Fairbank Center for Chinese Studies (1955), and the Harvard Center Shanghai (2010). 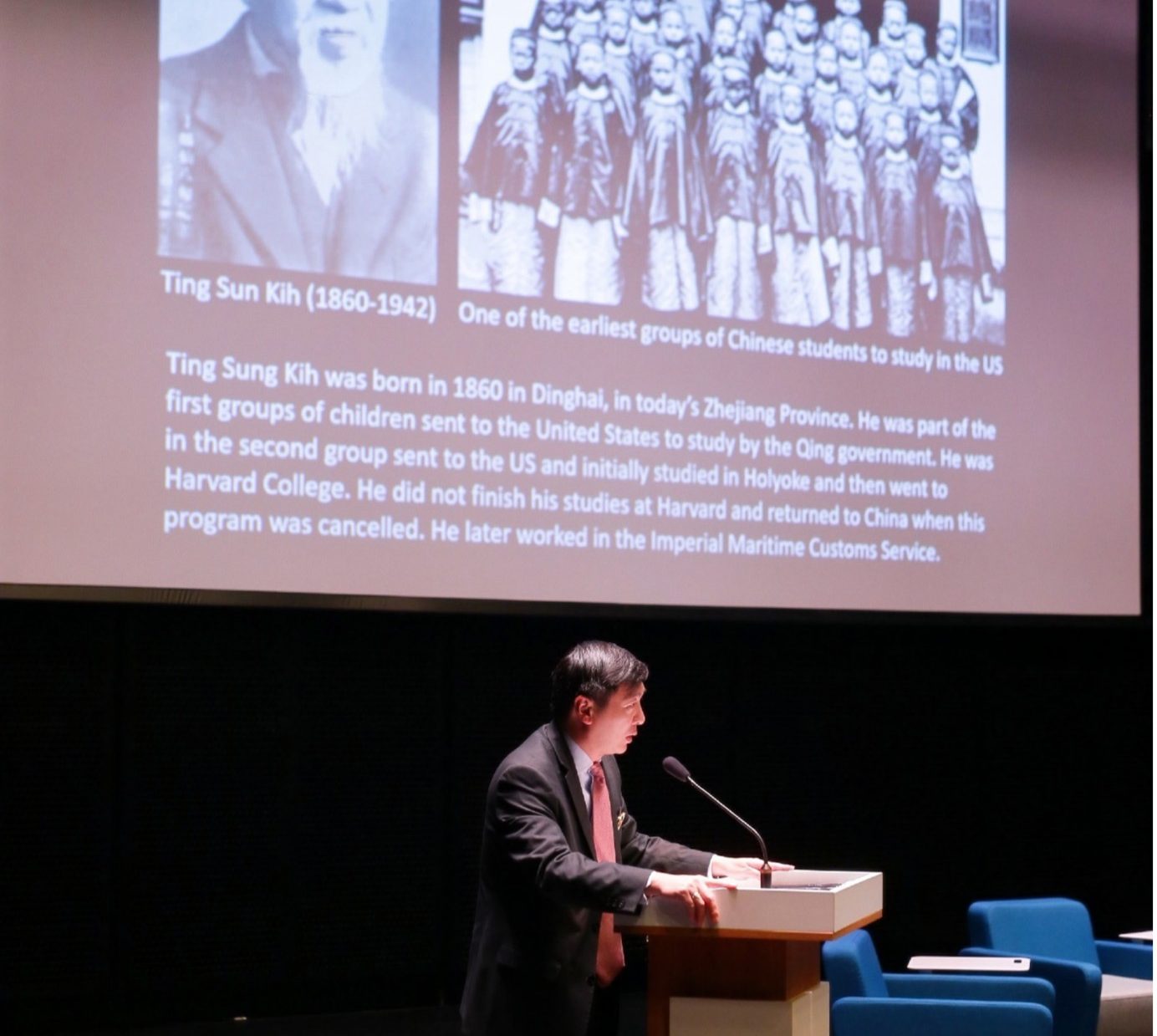 Wang (pictured above) also spoke about the growing flow of Chinese students studying abroad and returning to China being a key component of China’s engagement with the world, with a steady growth of 140,000 outbound Chinese students and 45,000 returning students in 2007 to 704,000 and 580,000, respectively, in 2019. Wang noted that a majority of these students study in the US and stressed the need to support this flow of students – and the associated flow of ideas – especially at a time when this flow is at risk.

Michael Hart then moderated a panel discussion about how American educational institutions are partnering in China to promote their brands, featuring both Alex Brose and Wang Yi, plus Carol Li Rafferty, Managing Director of the Yale Center Beijing, and David Pe, the Dean of Students for NYU Shanghai. Li Rafferty noted that Yale has had 150 partnership with Chinese institutions, including Tsinghua University in Beijing and Jiaotong University in Shanghai, and that the school places an emphasis on collaboration. The NYU Shanghai campus, Pe said, is coming to the end of its first decade in China, and has grown to the extent that it is now looking to upgrade to a larger campus.

On the topic of how physical locations in China allow schools to connect with Chinese students directly in a way that wouldn’t otherwise be possible, Brose talked about reaching the community, creating dialogues, and providing an opportunity to show that music can connect in ways that words cannot. He also noted that the Julliard campus in Tianjin allows Chinese artists who had been studying and playing overseas an easier way to return home and continue their careers, saying that the school’s mission is to create global artist citizens.

Wang said that the classrooms at the Harvard Shanghai Center had been specifically designed to replicate those from Harvard Business School, allowing students in China a more authentic experience. Echoing Brose’s comments, he noted that the Center also provides a home for Harvard alumni once they have returned to China.

Li Rafferty explained that some local innovations in certain courses in China had been transferred back to the New Haven campus. Similarly, Pe said that NYU Shanghai had created courses in China that are not offered in New York, also stressing the importance of both the availability and the access of high-quality education.

Elsewhere in the fascinating discussion, Wang said that the growth of students studying overseas is crucial in fostering mutual understanding, adding that he hopes that this trend continues. Both Li Rafferty and Brose spoke about technological developments, with Li Rafferty noting that online programming had developed rapidly over the past year, due to pandemic-related restrictions, while Brose explained how remote video auditions – something that was previously unheard of – was now an accepted part of the entrance process. 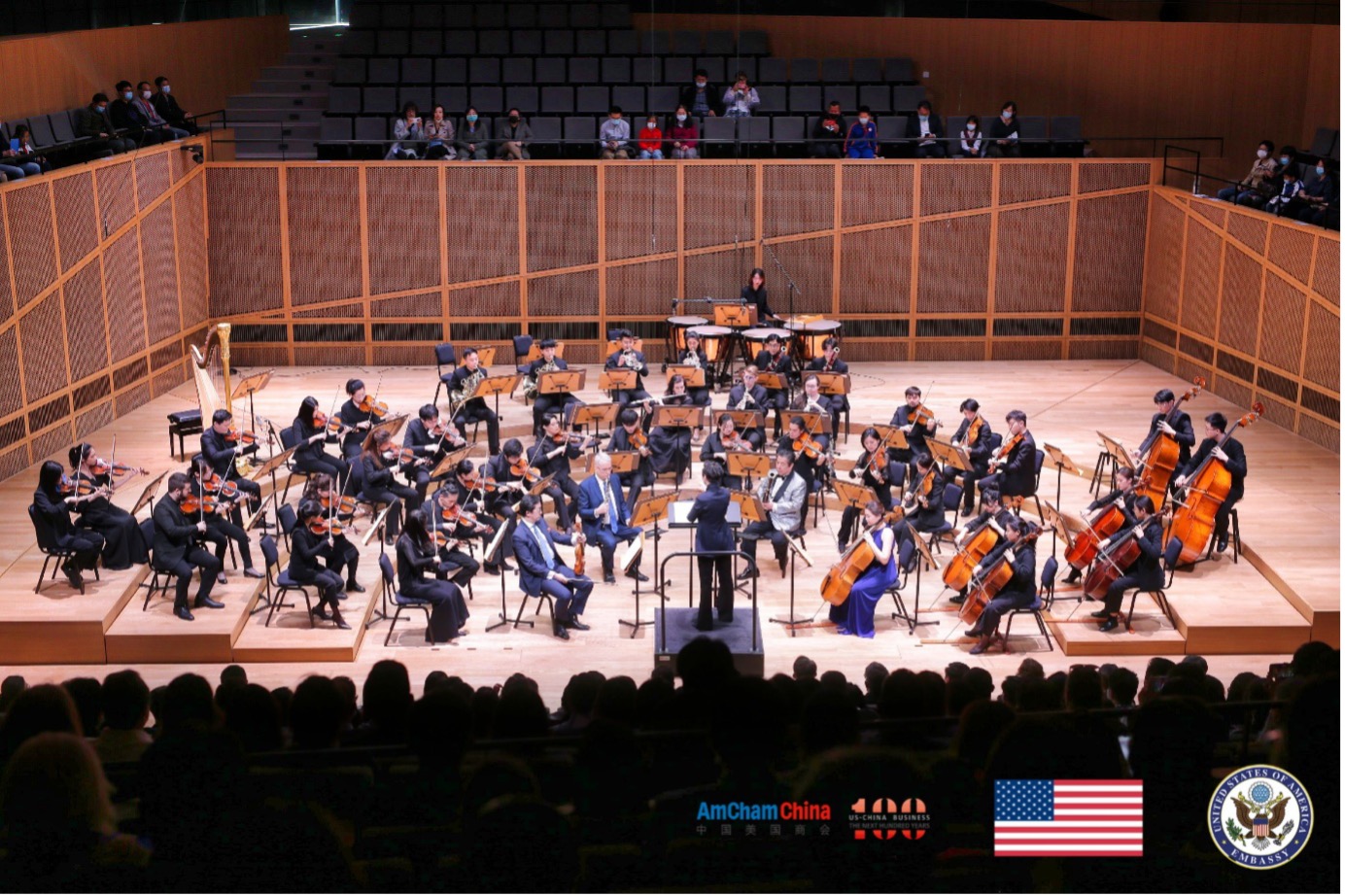 The panel was followed by fantastic concert by the Tianjin Julliard Orchestra, led by Conductor Chen Lin. Haydn’s Sinfonia Concertante in B-flat Major featured soloists Scott Bell (oboe), Akio Koyama (bassoon), Weigang Li (violin), and Yeonjin Kim (cello), Ravel’s Le Tombeau de Couperin and Schumann’s Symphony No. 4 in D Minor rounded out the program. Attendees were then treated to a cocktail reception on the patio of the school. 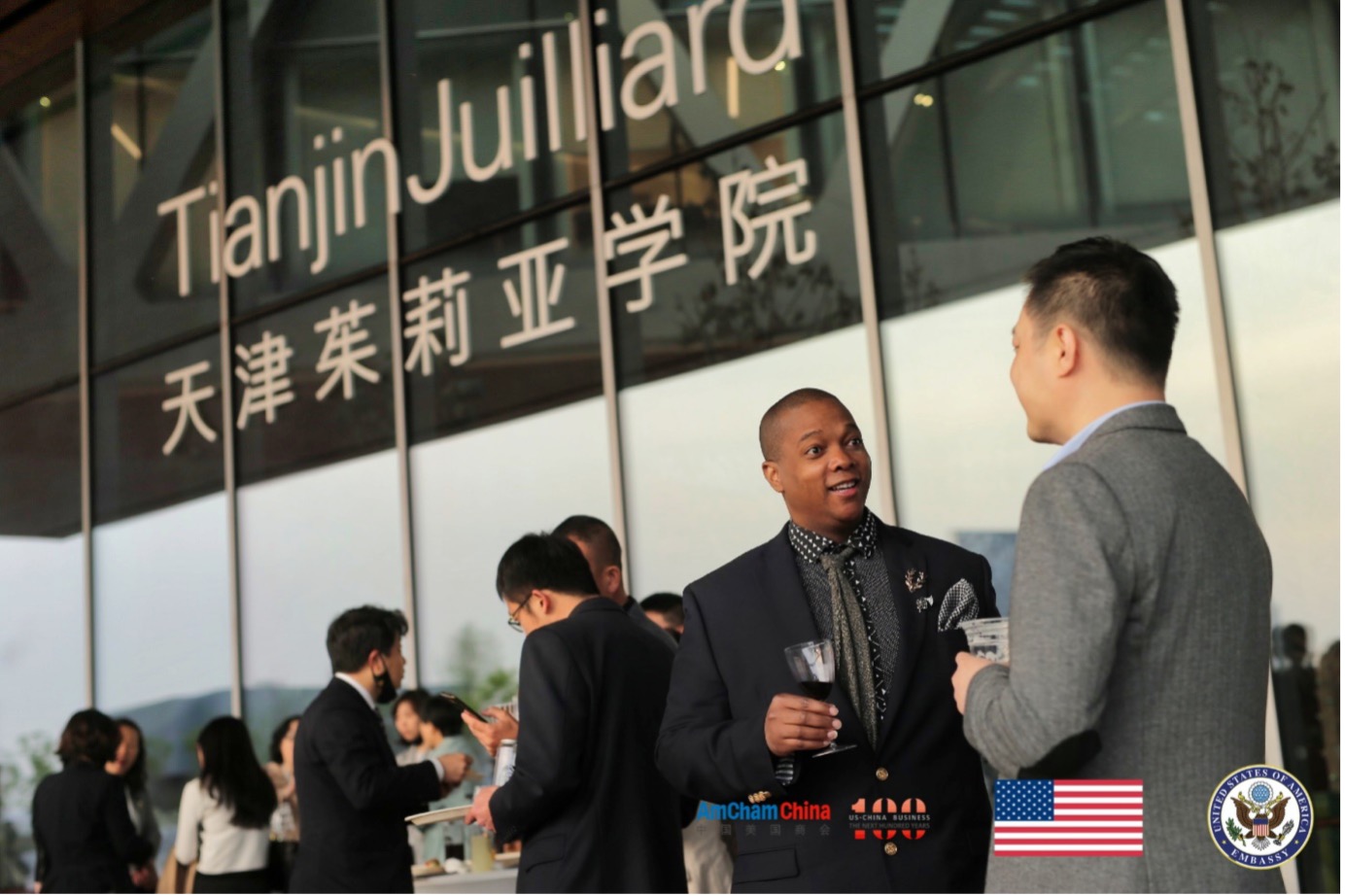 Meanwhile in Beijing, the “Supporting Girls in Their Formative Years of Leadership” event kicked off with a trip to Beijing United Family Hospital. The event aimed to promote an understanding of general concepts of leadership with a focus on gender equality and promoting the mindset of female leadership in the younger generation. Attendees were welcomed with remarks from Vanessa Shaw-Dore (pictured below), Country Director of the Food & Drug Administration’s China Office at the U.S. Embassy, who recalled her own educational experience at elementary school, among other highlights. 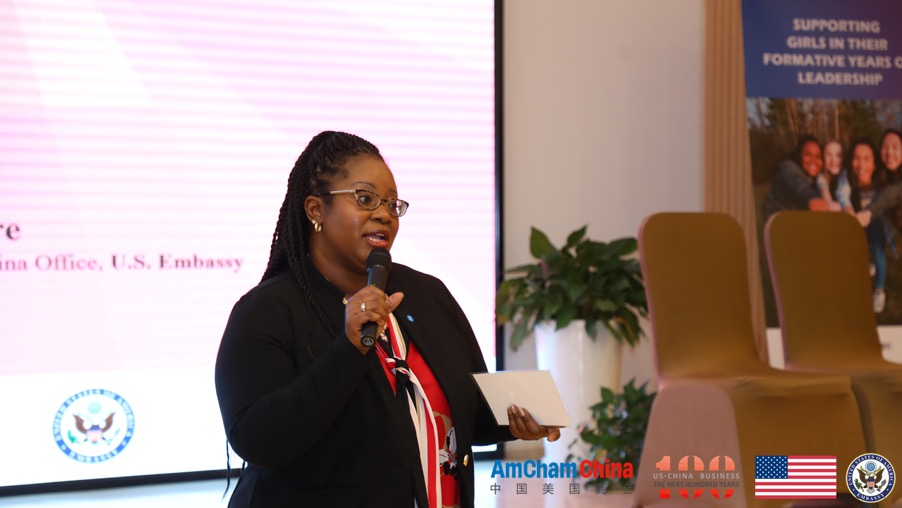 Following additional comments from Gloria Xu, former Vice Chair at AmCham China and Public & Government Affairs General Manager for Greater China at Dow Chemical, keynote speaker Miriam Brofman, Director of Patient Services & Relations at Beijing United Family Hospital, spoke on the topic of gender equality in healthcare. Among other topics, Brofman unpacked how she and her team creatively implement and promote approaches to improve services across both her organization and field. 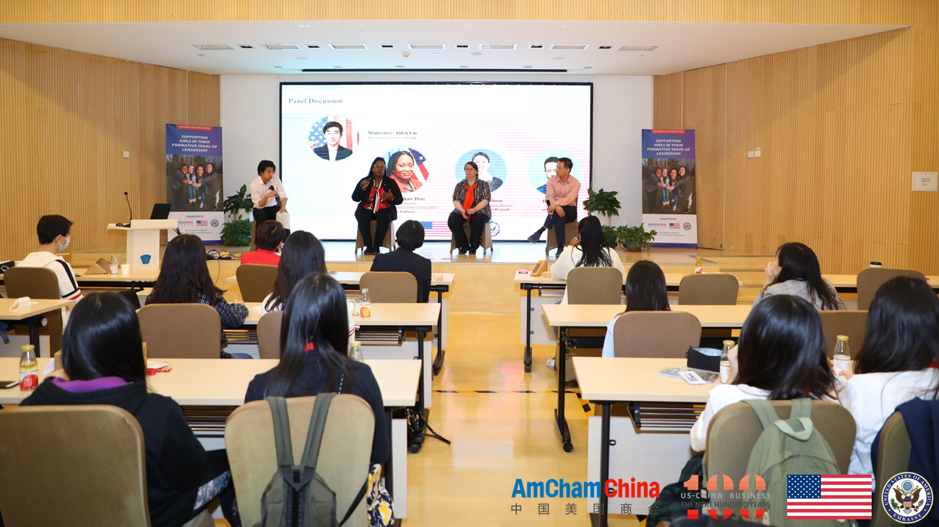 Next, ISB student Aiden Lin moderated a panel discussion with Shaw-Dore and Brofman joined by Dr. Hubert Lin, co-founder of Message Coach. Opening up the room for questions, panelists discussed universal issues surrounding growth and leadership, and how to cultivate future female leaders. Shaw-Dore stressed the importance of developing strong leadership skills and the many avenues students can take to learn them, from exploring extracurriculars to getting involved in team sports or activities. Brofman added that it is important to understand which are the right moments for leadership, and that taking advantages of opportunities to lead does not mean you must always lead. Above all, Brofman said that confidence and belief in yourself is key to success in any field. 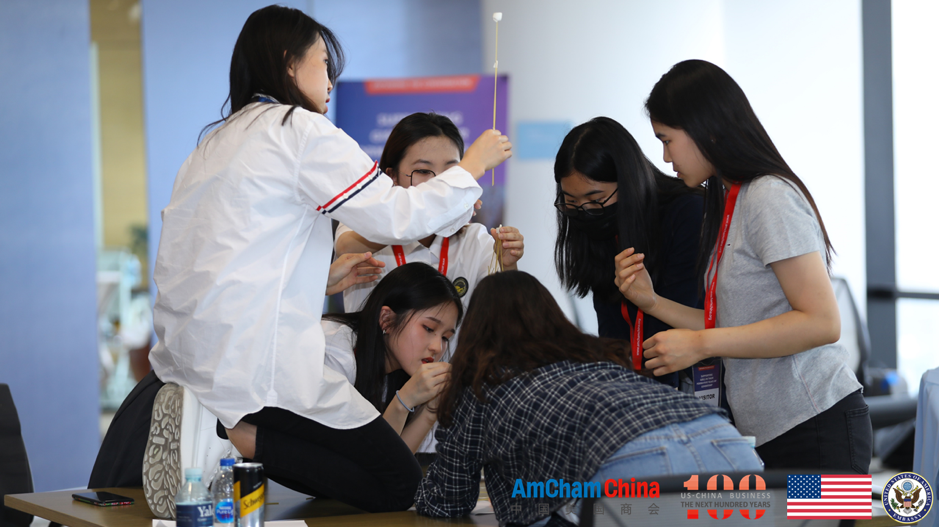 Lin noted that there is still a double standard in the perception of men and women when they assert themselves in the workplace, going on to say that he believes a balanced approach of those traditionally “yin and yang” elements are what makes for a strong leader. On the same topic, Shaw-Dore pointed out the differentiating styles between male and female world leaders, noting that we can learn by observing those who lead through consensus, empathy, and community building.

Finishing the day on an inspirational note, attendees moved to the Yale Center Beijing where Lin Gao, writer of the best-selling book “职得” and Dr. Lin led a Leadership and Storytelling workshop where students explored their own leadership experiences and successes. 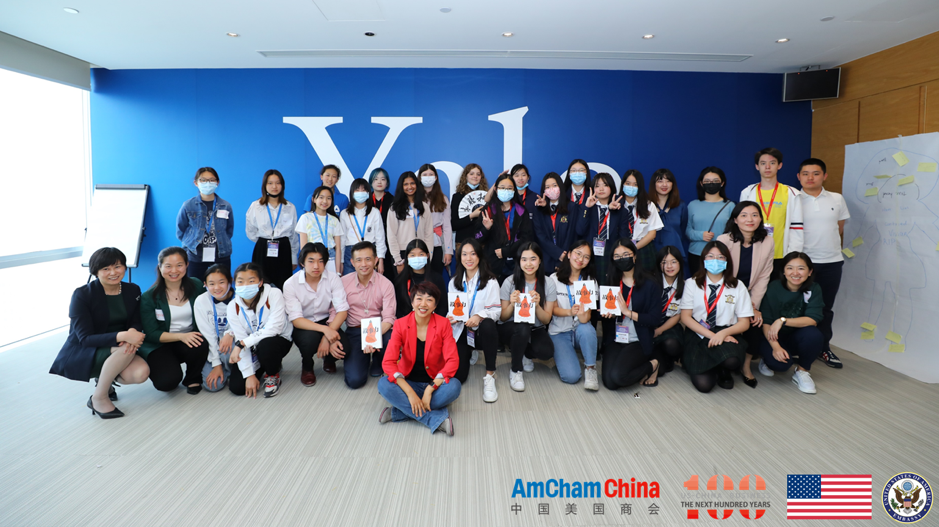 Tech Top: IBM’s Greater China CEO on Being Essential in China
May 14, 2021