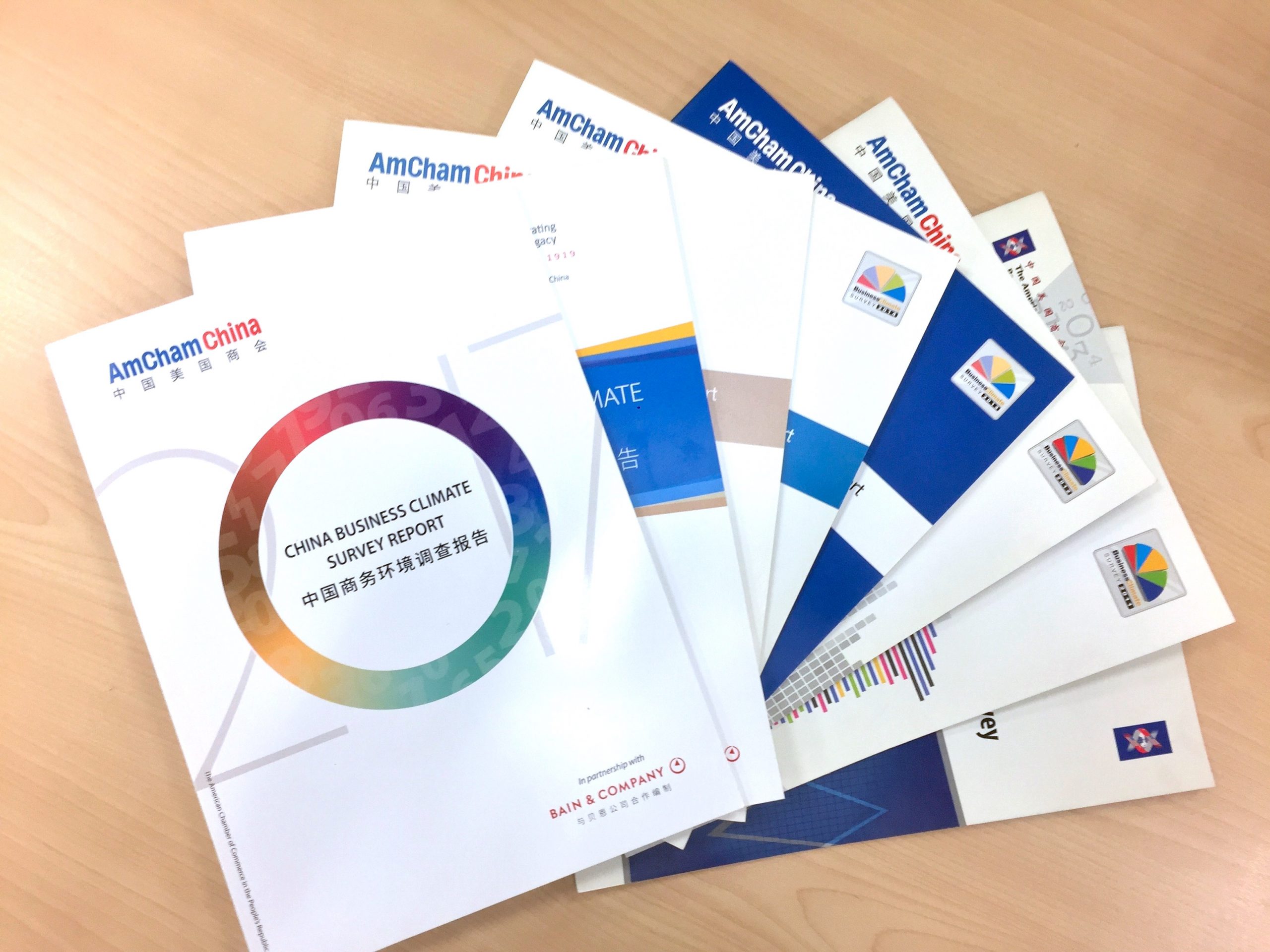 Every year we invite representatives from each one of our member companies to be part of the conversation by sharing their insights through the Business Climate Survey. Click here for information about how to get involved.

For the last 19 years, AmCham China has been recording the vital signs of the foreign business community in China and providing insights into the health of the US-China economic relationship through the publication of the survey’s results. Published in January of each year, the 2018 survey will be the 20th edition of the report, and the fourth to be conducted in cooperation with Bain & Company. The Business Climate Survey, as AmCham China’s most high-profile annual publication, receives extensive attention in domestic and foreign media, in company boardrooms, and in AmCham China’s advocacy efforts to both Chinese and US government officials.

The survey release event attracts immense domestic and international media coverage, eager to learn the latest data about the attitude of foreign businesses operating in China. Last year, for instance, William Zarit, the Chairman of AmCham China, gave exclusive interviews with domestic and international news networks including Phoenix TV and CNBC. The report receives a full 365 days of coverage from major news media outlets – it is frequently cited in stories about the US-China trade and investment relationship throughout the year.

AmCham China Chairman William Zarit discusses the results from the 2017 Business Climate Survey during a live segment broadcast on CNBC.

The Business Climate Survey is also a useful tool for policy advocacy efforts on behalf of members of AmCham China. “The survey – the voice of American business in China – is critically important for telling your story to policymakers in China, the US, and beyond,” said Zarit. “The statistics are better than a thousand words, and are essential to advancing the interests of AmCham China’s membership.”

The figures from the report have made their way into talking points of both Chinese and US government officials, and are often one of the first discussion points when AmCham China’s leadership attend advocacy meetings.

Beyond the value of the survey for communicating the Chamber’s message, the data is also an important benchmarking tool for companies that operate in China. Reports from previous years are an important source of historical data about the direction of trends in the business environment. In addition, the release date of the report, in early January, is intended to enable executives to make better-informed decisions about business strategy for the forthcoming year.

“The insights and perspective gleaned from the Business Climate Survey are invaluable to companies like Vermeer,” says Colm Rafferty, Vice President of Asia Pacific at Vermeer Corporation. “Every year, we review the survey results during our China business board meeting, to provide context for our strategic recommendations.”

“This year is a really special year,” says Beebe. “This is a dynamic time in the US-China economic relationship, and it is the 20th anniversary of the survey.” Last year, Beebe and other chamber leaders even go so far as to call members personally to encourage their participation and ask about their business concerns. “It’s not just something we send out and hope for the best,” said Beebe, “it’s really the center of the work we do in our advocacy for American businesses in China.”