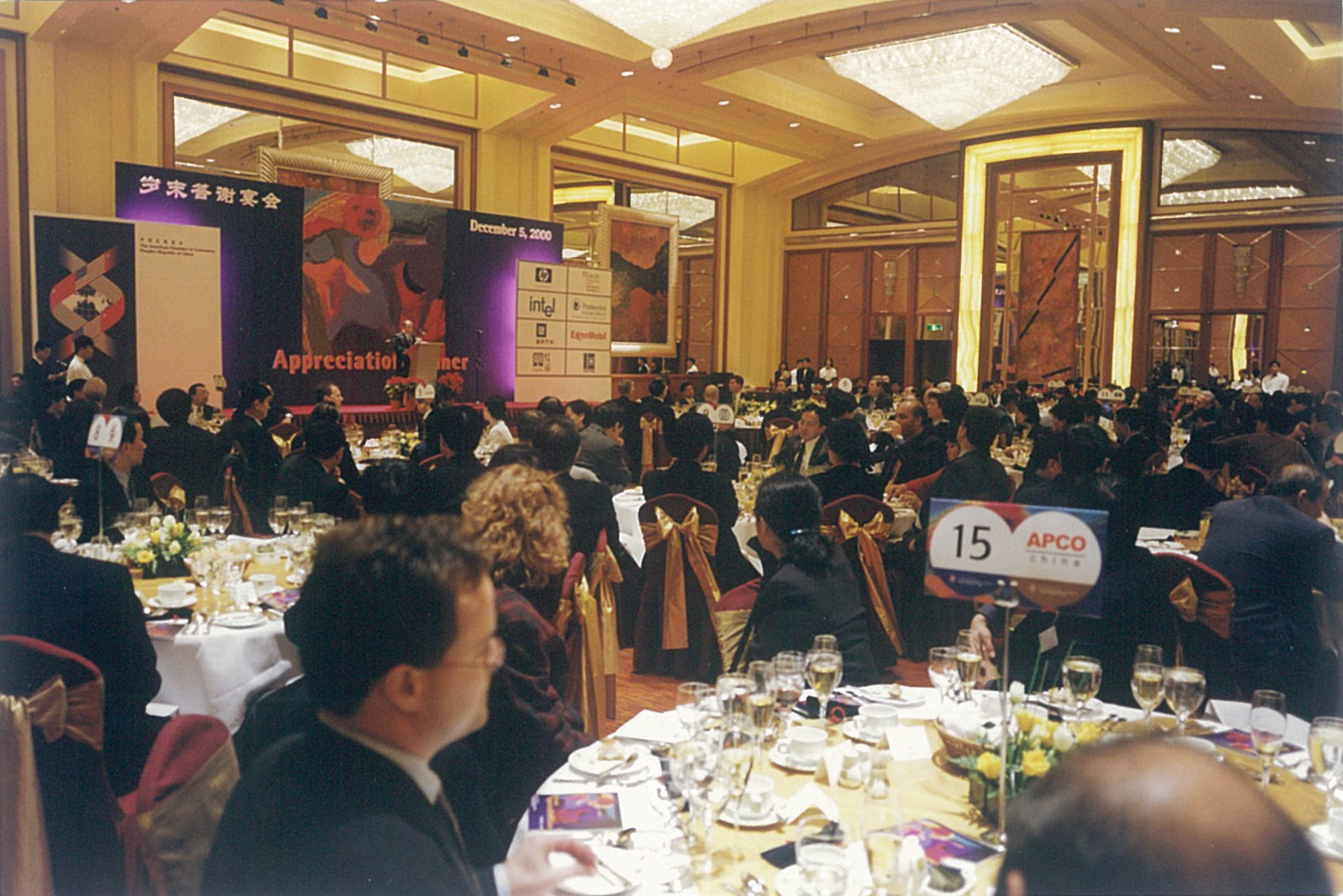 A Brief History of the Chamber

The chamber traces its roots back to 1919 and a meeting in the nation’s capital, then known in English as Peking, at the height of summer. According to an article in the New York Times dated Aug. 26, 1919, the founding members were from Andersen, Meyer & Co., the International Banking Corporation, the American Trading Company, the China-American Trading Company, the American Bank Note Company, E. W. Frazer & Co., the Siems-Carey Company, and the Standard Oil Company. The first President was Harold Cushing Faxon of Andersen, Meyer & Co., a China-based company that brought American industrial products into the country.

The chamber became a member of the US Chamber on May 27, 1920, at which time dues were $10 Mexican silver for individuals and $50 Mexican silver for companies. Stationery from 1923 locates the chamber’s office at 3 Ta Sha Mao Hutong, an address near Wangfujing that still exists today.

The chamber in Beijing wasn’t the first to be established in China – Shanghai and Tianjin already had chambers by that stage. Together they joined the Associated American Chambers of Commerce in China when it formed in 1922 along with the chambers in Hankow (now in Wuhan) and eventually Harbin.

Not much is known of the chamber’s activities in the 1920s. However, Faxon is named as one of the founders in 1920 of a fund to provide relief for an estimated 20 million Chinese across four provinces affected by famine.

At some point, probably around the start of the Second Sino-Japanese War in 1937, American business retreated from Beijing and the chamber disbanded.

The beginning of economic liberalization in 1979 heralded the return of American business. Two years later, after a 44-year absence, Beijing once again had an American Chamber of Commerce. By the time it rejoined the US Chamber on Nov. 11, 1981, it had 36 members.

In those days, the chamber had no employees or office, and the elected president would take it upon his or herself to manage the chamber’s affairs with the help of other board members.

One of the early leaders of the chamber was Sally Harpole, who was working for law firm Graham & James when she became president in 1985. “When the chamber started, there weren’t a lot of activities,” she said, “so I tried to make sure we had at least one meeting for the entire membership every month to give people the feeling that the chamber was a real organization that was continually accessible to the American business community.”

These gatherings often took place in the basement of the Jianguo Hotel, one of the few international-standard hotels in Beijing at the time. The speakers were frequently members, sharing their experiences, but occasionally a visiting dignitary would address the chamber – these included US Vice President George Bush Sr. and Attorney-General Ed Meese. The big issue at the time was the start of China’s bid to join the World Trade Organization (read more here), a process that eventually took 15 years to complete.

Another important issue at the time was registration for the chamber. There was no law for the organization to register under, so government officials were often reluctant to meet with the unofficial body. This all changed with the passage of the Provisional Rules for the Administration of Foreign Chambers of Commerce in 1989. Even then, it still took the chamber almost two years to complete all the paperwork and receive certificate No. 2 from the Ministry of Civil Affairs. (Rumor has it the Japanese Chamber snagged certificate No. 1.)

With legitimacy, the chamber also needed a physical presence. Its first known address was simply Ground Floor, Great Wall Sheraton Hotel, which itself was the product of one of Beijing’s first Sino-US joint ventures and housed the offices of several corporations. The chamber then moved upstairs to occupy Room 301, then upstairs again to the far less auspicious Room 444.

It was around this time that the chamber started producing its first newsletter, titled Beijing Times (see our magazine archive). The first two editions have sadly been lost to history, but Vol. 1, No. 3 mentions a chamber trip to Washington D.C. that met with then-Senators Joe Biden and Max Baucus, the latter of which became US Ambassador to China more than 20 years later.

Also around this time the chamber also got its first Executive Director, a staff position that is now known as President. The first holder of the post in 1995 was Jane Redicker, who had arrived a few weeks earlier with her husband. The staff at the time consisted of three Chinese part-timers, Redicker said, “and the four of us tucked ourselves into a single hotel room that was our office.”

The mid-90s was a boom time for American companies coming to China, and Redicker’s team expanded according to the growing membership. One of the new hires was Kathy Wang, who joined as a receptionist and remains with the chamber to this day as an accountant and the longest-serving member of staff.

“In those days we had membership, events, the magazine, training, and today it’s much the same,” Wang said. “But now we have more details and the scale is much bigger. The accounting is also more complicated.”

By the end of the decade, the chamber had outgrown the Great Wall Sheraton (it was by then in a suite on the third floor), and moved to 1903 China Resources Building on Beijing’s Second Ring Road, which was also occupied by the American Club.

By the turn of the century, the chamber had grown from less than 300 members at registration to well over 1,100 members, who demanded a greater range of services and networking opportunities. In 1998, the first HR Conference was announced, and work began on the first White Paper (read more here), which would become AmCham China’s flagship advocacy document.

In 1999, the AmChams in Wuhan and Tianjin became affiliate members, and in 2000 the chamber held its first Appreciation Dinner. But it wasn’t all plain sailing. AmCham China was sending delegations to Washington twice a year to help get China’s WTO bid over the line, and even this mission was complicated by US bombing of China’s embassy in Belgrade (read more here).

But China’s entry to the WTO meant that China was even more important in the US-China business relationship, and the chamber hosted a succession of senior administration figures from both sides, including regular briefings from US Trade Representatives and Commerce Secretaries.

The chamber also engaged in more community work, both internally and externally. For a while it was home to the American Community Club. In 2003, an annual charity golf tournament was set up, which, along with a Charity Ball, began generating hundreds of thousands of yuan a year for good causes. The first of the cooperative programs, focusing on aviation, was created, as was a group examining compliance with controls on high-tech US exports to China (read more here).

The chamber continued to expand in the run-up to the 2008 Beijing Olympics, and later that year the chambers in both Tianjin and Wuhan (Central China) merged with AmCham China. Growth meant yet another move in November 2009, this time to The Office Park in the CBD area of Beijing, where it remains to this day. The following year, the chamber in Dalian became the Northeast China chapter.

The success of the Aviation Cooperation Program spawned new groups based on a similar model in energy, health, and food and agriculture (read more here). And in 2014, the chamber opened a new office in Shenyang under its Northeast China chapter.

Understand more about the chamber’s history: