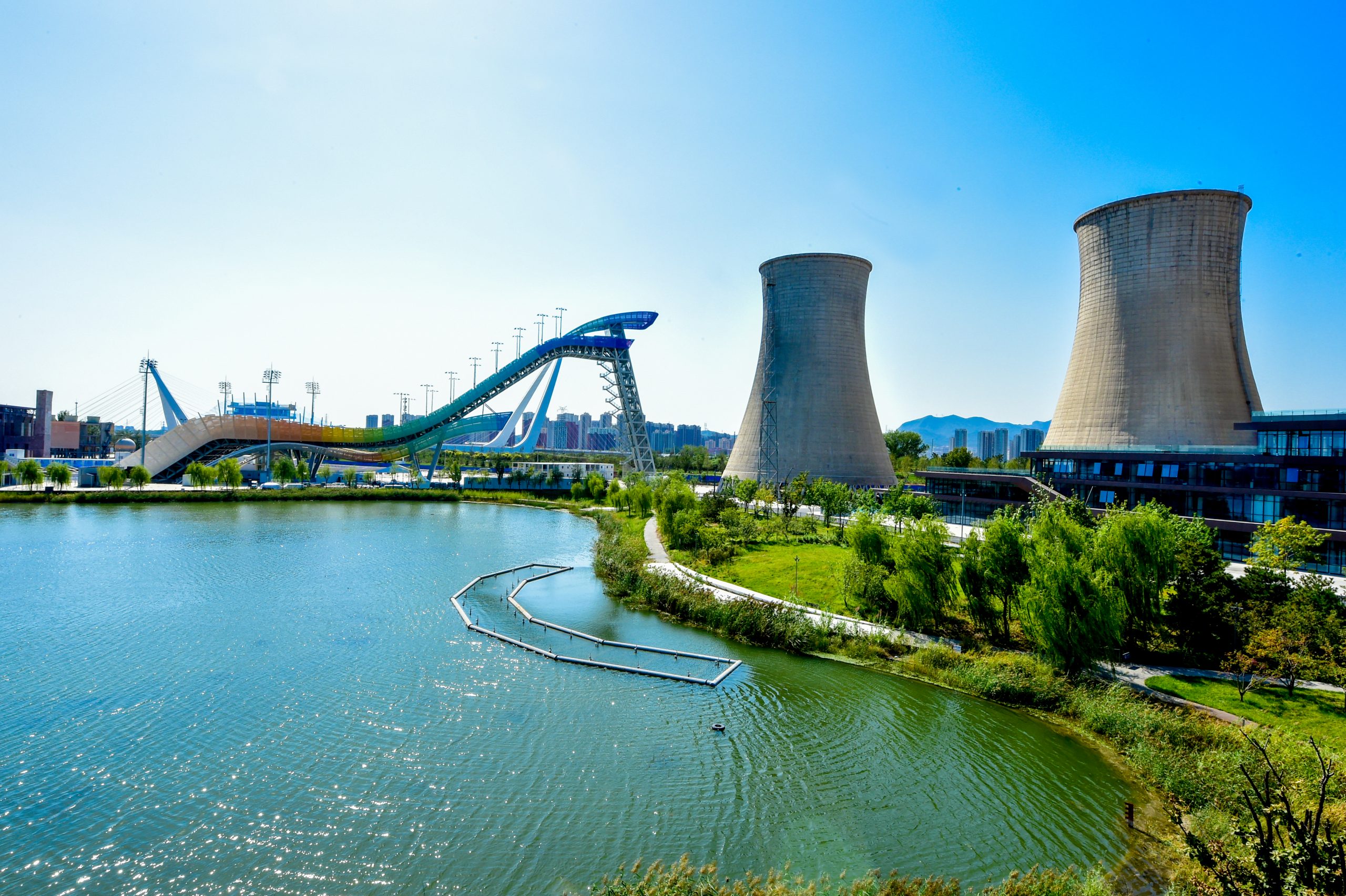 A Look Inside the Shougang Olympic Park

Last autumn, ahead of the 2022 Beijing Winter Olympics, AmCham China members were invited to an exclusive tour of the Olympic Park in Shougang. The AmCham China Quarterly joined the event for an inside look at the Park, preparations for the Games, and updates from officials from the Beijing Organizing Committee for the Olympic Games (BOCOG).

Located in the Shijingshan district of western Beijing, Shougang Park is a sustainably developed area that’s set to host some of the biggest events of the 2022 Winter Olympic Games. The venue’s construction began in 2018 on the site of a former steel mill owned by the Shougang Group. Following its completion in 2019, Big Air Shougang became the world’s first ever permanent big air venue, hosting snowboard and freestyle skiing events.

Jiang Jiang, Vice President of the CPAFFC (left) and Qian Zhang, Director-General of the International Relations Department of BOCOG

AmCham China President Alan Beebe began the event by thanking the CPAFFC and the BPAFFC for their support in organizing the event. The tour, he explained, was part of an event series that aims to bring people together from both the US and China to explore topics of mutual importance, from arts and education to science, music, and sports. This event, in particular, focused on the topics of sustainability and accessibility. Beebe then introduced Jiang Jiang, CPAFFC’s Vice President, who delivered welcome remarks.

The first keynote speaker was Ms Qian Zhang, Director-General of the International Relations Department of BOCOG, who kicked off the day’s presentations. Zhang remarked that despite the ongoing pandemic, preparations for the 2022 Beijing Olympics had been progressing smoothly due to the rigorous pandemic control measures. After showcasing some relevant videos and images, Zhang introduced some of the details of the organization of the Games. At the time of the event, it was 128 days until the Opening Ceremony, a period of time she referred to as a “critical point” in the dash to reach the finish line.

Zhang also provided more details on the three designated zones for the Games: Zhangjiakou, Yanqing, and Beijing. She noted that each of these three zones will have its own closed loop management system, in line with pandemic control measures. Within these three clusters, Zhang showcased 12 dedicated venues and highlighted new infrastructure, including the high-speed railway connecting Beijing and Zhangjiakou. In particular, Zhang focused on the cutting-edge technology used to create a “sustainable Games.” All of the ice venues, including the new National Speed Skating Oval and the Ice Cube (formerly known as the “Water Cube” during the 2008 Summer Games), will utilize a new carbon dioxide refrigerant to achieve net zero emissions.

Zhang noted that sustainability has been the mantra of the entire planning process for the 2022 Games. From the utilization of green energy and low-carbon management to the replanting of native flora displaced by construction, she expressed the hope that the Beijing 2022 Olympics Games’ lasting legacy would be its commitment to sustainability. Zhang wrapped up her remarks saying that BOCOG had benefitted from help and cooperation provided by the US side ahead of the Games and she applauded the spirit of collaboration that had arisen from the Olympic Games.

To finish the presentations, AmCham China’s Sports Committee Chair, Bryan Bachner, led a panel discussion on the topics of sustainability and accessibility for persons with disabilities within the context of the Olympic Games.

The panel recognized the progress China has made in accessibility since the 2008 Games. In the process of preparing for the 2008 Paralympic Games, China implemented changes to improve accessibility for an often-marginalized community. They cited legislative changes as well as modifications to venues and tourist areas in order to improve accessibility for disabled individuals. The group credited the 2008 Games with getting the ball rolling on expanded accessibility. The panel wrapped up by noting that the results from this focus on accessibility had culminated, most recently, at the 2020 Paralympic Games in Tokyo: China not only led the largest delegation to the Paralympics, but also won the most medals.

The day’s activities concluded with a tour of the Shougang Big Air venue, which will host the men’s and women’s freestyle skiing big air events on February 7-8, 2022, and the men’s and women’s snowboarding big air events on February 14-15, 2022. Attendees were able to see the magnificent jump up close, and take pictures with the stunning backdrop of far-off mountains and the nearby lake.

This article is from the AmCham China Quarterly Magazine (Issue 1, 2022). To access the entire publication for free, sign up on our member portal here.