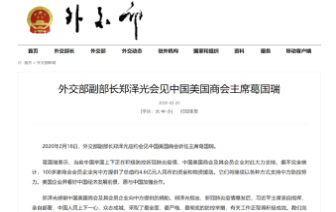 AmCham Chairman Greg Gilligan met with Vice Foreign Minister Zheng Zeguang on February 18 to discuss the efforts of the Chamber’s member companies in the Wuhan relief efforts. It was Zheng’s first meeting following the start of the Covid-19 outbreak, and is just the latest in a long line of high-level government contact initiated by AmCham China in recent days.

An article posted on the Ministry of Foreign Affairs (MOFA) website reported that Gilligan said the Chamber and its member companies strongly support China’s efforts to actively prevent and control the epidemic. He also noted that, so far, more than 100 AmCham China member companies have contributed cash and in-kind material assistance worth about 460 million yuan, but noted that the incomplete data represented just a small percentage of the membership, with more donations coming in every day.

Gilligan said the AmCham China will continue to support China’s prevention and control efforts, and that the US business community is optimistic about China’s economic development prospects and is willing to strengthen cooperation with China.

This is just the latest high-level government contact that AmCham China has had during this critical time. In recent days, Chamber representatives have also spoken with ministries including the National Development and Reform Commission (NDRC), the Ministry of Commerce (MOFCOM), the Ministry of Finance (MOF), the Ministry of Industry and Information Technology (MIIT), the China Council for the Promotion of International Trade (CCPIT), the National Health Commission (NHC), and the National Immigration Administration (NIA), as well as organizations including the International Department of the CPC’s Central Committee (IDCC), and the Propaganda Department of the CPC’s Central Committee (PDCC), and several local and provincial government authorities, including those in Beijing, Wuhan, Tianjin, Dalian and Shenyang.