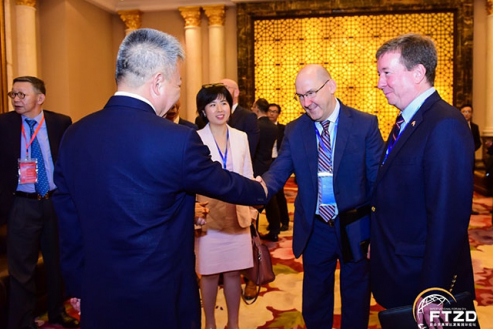 In 2018, the Chinese government announced their designation of Hainan as the 12th Free Trade Zone (FTZ). Since then, Hainan’s business-friendly policies are alleged to have attracted the investment of over 300 foreign companies into the emerging FTZ. At the 2019 AmCham China Government Affairs Conference earlier this year, AmCham China members voted Hainan as a top destination for 2019 Business and Investment Outreach (B.I.O.) trips.

As such, from May 20 to May 22, AmCham China Vice Chairman Greg Gilligan, President Alan Beebe, and a delegation of AmCham China member companies and staff embarked on the first-ever B.I.O. trip to the Hainan FTZ. With the aim of better understanding updates to the Hainan FTZ policies and exploring local investment opportunities, more than 20 AmCham China members from a wide range of sectors, including technology, healthcare, sports & entertainment, agriculture, and consulting joined the B.I.O. trip delegation.

The B.I.O. trip was officially kicked off with a visit to Haikou, where the delegation met with Haikou Party Secretary Zhang Qi, Mayor Ding Hui, and Vice Mayor Feng Honghao. During the meeting, Zhang introduced Haikou’s focus on the tourism, modernization of services, and high-tech manufacturing industries, and further exemplified the government’s commitment to reform by comparing Haikou to Florida and Las Vegas in terms of its opening up towards conventions and exhibitions, arts and entertainment, and auction industries.

Moreover, the Haikou Party Secretary made clear that by 2025, the market of Haikou will complete its rule of law reform, and, by 2035, Haikou will become a leading free trade zone worldwide. Speaking to Zhang’s point, AmCham China Vice Chairman Greg Gilligan noted the many diverse and competitive advantages Haikou now has as a market and investment destination, such as in resources, policy, ecosystem, and geography. He further expressed his confidence in future cooperations between the Haikou government and AmCham China.

In addition to a meeting with the municipal government leadership, the Haikou government also hosted a two-hour roundtable discussion between the AmCham China delegation and 15 related subsidiary departments, including the Bureau of Commerce and the Development and Reform Commission. Through the discussion, the delegation learned about the myriad policies and investment opportunities in Haikou that are creating such a favorable investment environment for foreign enterprises.

The government representatives expressed that, regardless of whether the overall political environment supports it or not, Haikou will remain committed to opening up the market for foreign companies. "For companies in industries including conventions & exhibitions and high-end healthcare, they will be supported in Haikou", said the representatives.

Later that day, the delegation visited Haikou Jiangdong New District and Haikou National High-Tech Industrial Development Zone. Vice Director of Management Han Qing fielded an assortment of questions regarding industry planning and supporting policies to which several members of the delegation explicitly expressed interest for cooperation in the future.

During the trip, the AmCham China delegation was also invited to attend the 2019 International Forum on Free Trade Zone Development. The forum was held for the first time by the China Council for the Promotion of International Trade (CCPIT) and China Chamber of International Commerce (CCOIC).

Shen Xiaoming, Governor of Hainan Province, met with Vice Chairman Greg Gilligan and President Alan Beebe and had an in-depth discussion regarding future cooperation between Hainan province and AmCham China. During the meetings, Governor Shen described the depth of the reform in Hainan. Governor Shen conveyed a clear message that there will be few provinces bolder than Hainan in providing support to foreign companies and attracting investments, says Beebe.

At the forum, Gilligan delivered an address in which he noted that since the establishment of the Hainan FTZ, Hainan has made impressive progress in attracting foreign companies and foreign investments. Gilligan went on to state that in light of current geopolitical uncertainty, Hainan should continue to improve and develop its business environment and deepen reform.

Gilligan reiterated that AmCham China is committed to acting as the bridge between American businesses and both the US and Chinese governments and a facilitator that informs our members of local business opportunities. Gilligan’s speech was well-received by the guests of the forum, garnering rounds of applause throughout. Also attending the forum were the Vice Governor Shen Danyang, Former Australia Prime Minister Kevin Michael Rudd, and CCPIT President Gao Yan.

Engaging with the Provincial Government

Throughout the three-day trip, the delegation received warm welcomes from government officials from all levels. The Hainan provincial government showed great interest in furthering cooperation with AmCham China’s 300+ member companies. Shen Danyang, Vice Governor of Hainan Province and the former spokesman for the Ministry of Commerce of China, in a meeting with the delegation, introduced the “three-zone & one-center” development strategy and the three focal sectors of tourism, modern service, and high-tech industries.

Vice Governor Shen reiterated to the delegation that Hainan, despite having a rather slow start compared to other special economic zones, will become the most liberalized FTZ in the country. As the next ten years are such a key time for the development of the FTZ, the Hainan government welcomes companies and organizations to actively voice their opinions and suggestions. The strong level of government access provided by the B.I.O. trip was highlighted by one of the delegation members who expressed that the opportunity to sit down with provincial and municipal governors provided insights into the overall policy environment and greatly supported one of the company’s projects located in Hainan.

As well, the Hainan Provincial Department of Commerce invited government representatives from 15 functional departments to host a roundtable discussion with the delegation. During the three-hour roundtable meeting, government agencies answered specific questions raised by AmCham China delegation members. Topics covered supporting policies aimed at attracting multinational companies, the development and enforcement of the ban on certain plastic products, policies regarding foreign healthcare agencies moving into Hainan, and development of seed, arts and entertainment, and other industries.

The delegation also conveyed concerns that companies have regarding the business environment. A delegate from the legal industry managed to directly report the challenges that foreign law firms are facing and subsequently receive direct feedback from the government officials. Through the process of the discussion, delegation members were able to establish deeper contact and engagement with the government agencies. One of the members pointed out that, as AmCham China collected their opinions on what government agencies they want to meet with beforehand, they were able to meet with specific officials that are practically helpful to their businesses. Alan Beebe, President of AmCham China, when reflecting on the meeting, said that a good level of support was clearly shown by the Hainan government, and the level of openness in this meeting proved that Hainan FTZ is indeed a pilot reform in today’s China.

The delegation then traveled to Bo’ao Lecheng International Medical Tourism Pilot Zone, located near the city of Qionghai, where they were accompanied by Qionghai Vice Governor Pan Yanhong. Throughout the entire trip, Vice Governor Pan showcased the technological advantages and progressive policies offered by the pilot zone. The delegation visited the Planning Exhibition Hall, Yiling Life Healthcare Center, and the Bo’ao Super Hospital, meeting representatives from the respective projects. Beebe, later said that trips like this help move the conversation beyond the meeting room and allow member companies to explore business opportunities they would not discover otherwise.

As Vice Governor, Pan’s enthusiasm also reflects the commitment of Qionghai government to create a better business environment for member companies. The Governor of Qionghai, Fu Ping, met with the delegation during dinner where he expressed his enthusiasm for working with AmCham China in the future and opportunities for further cooperation.

As well as meeting with government officials, the delegation also met with Hainan State Farms (HSF), a state-owned enterprise that holds one-third of the land resources in Hainan province. A member of the delegation, whose company specializes in agriculture, expressed great interest when meeting with HSF. They remained in touch and started following up on specific cooperation details.

Following the three-day B.I.O. trip, AmCham China received a wealth of positive feedback from the members of the delegation. Delegation members were deeply pleased by the robust agenda and the copious opportunities for in-depth meetings with government officials. Delegation members from sectors such as agriculture, healthcare, entertainment, service, and food & beverages were able to make progress with local governments for future projects and assess an assortment of opportunities in the FTZ.

Moreover, the Hainan government has expressed their interest in continuing cooperation with AmCham China. We invite our members to stay tuned for investment promotion events in the upcoming months, including potential discussions with representatives from 20 industrial districts in August and one-on-one discussions with government officials hosted by the Ministry of Commerce in September.

With great opportunities constantly arising as the Hainan FTZ continues to develop and mature, we hope that through AmCham China’s efforts, our members can more easily connect to government officials and other resources in Hainan, as well as other parts of China. As the US-China relationship continues through a period of turbulence and uncertainty, it becomes even more important for companies to reach out to regional governments and actively build relationships in order to realize success moving forward.