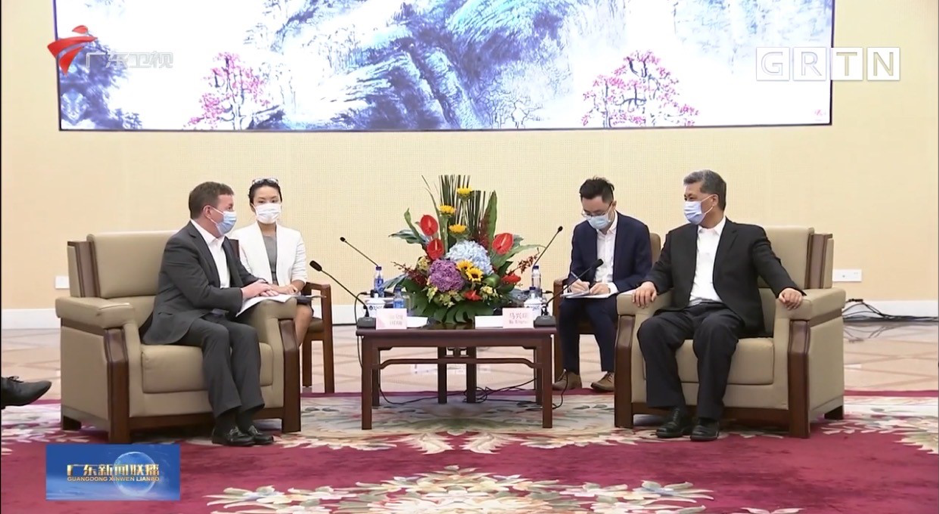 From May 26-28, AmCham China embarked on its second B.I.O. trip to Guangdong. This was the first B.I.O trip to Guangdong led by AmCham China Chairman Greg Gilligan, who was joined by Chamber staffers Associate Director Sijie Wang and Manager Chloe Ma, both with the Government Affairs and Policy team. 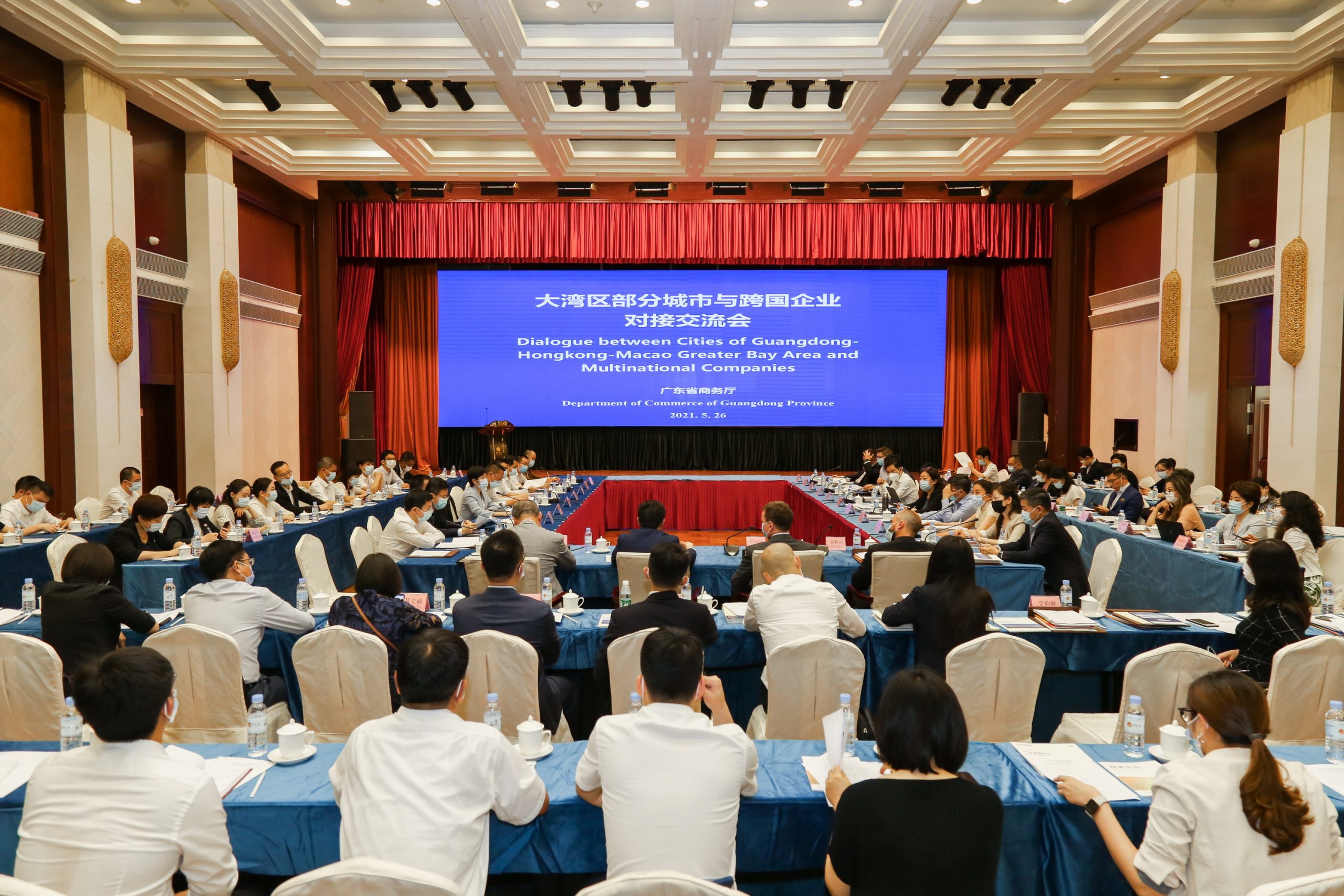 The first day of the trip, May 26, saw a Greater Bay Area (GBA) roundtable discussion (pictured above) with the AmCham China delegation. Director Generals from seven of the Municipal Commerce Bureaus joined to inform delegates about business opportunities in Foshan, Zhuhai, Dongguan and other GBA cities. 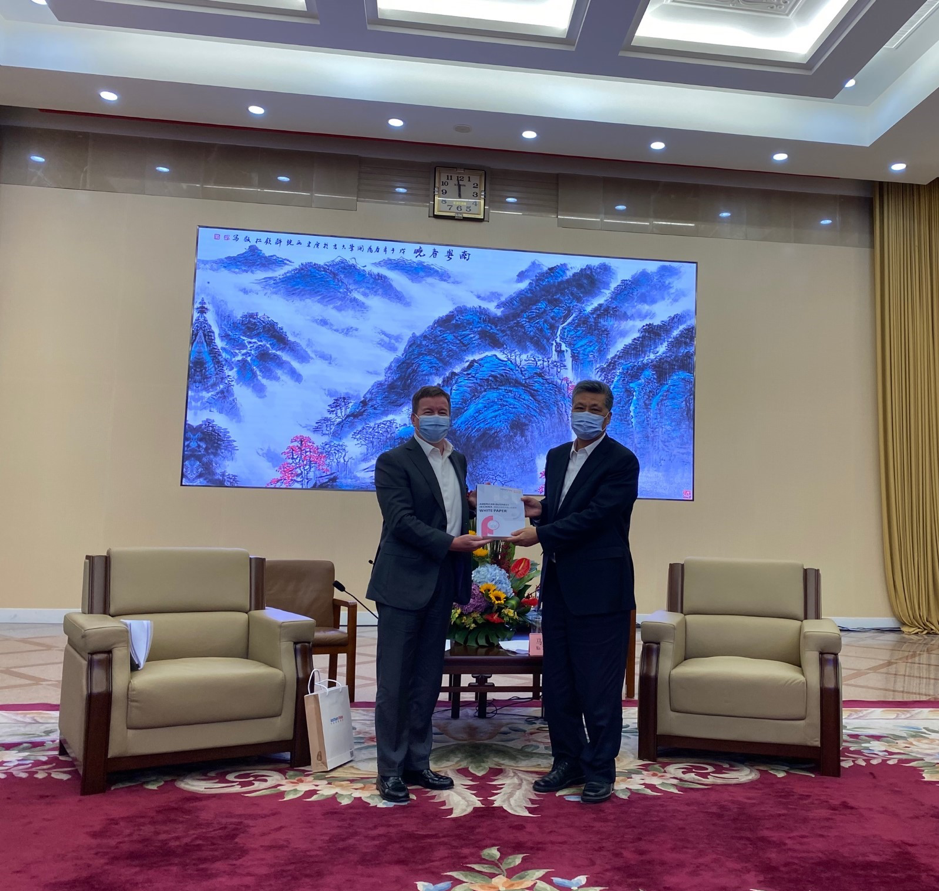 Day two of the trip featured a meeting with Guangdong Governor Ma Xingrui (pictured above). Senior company executives including Honeywell China President Steven Lien and Larry Fong of Mars Wrigley, among others, had the chance to exchange views on foreign investment with Governor Ma. The meeting was followed by a luncheon with Guangzhou Party Secretary Zhang Shuofu and Mayor Wen Guohui. 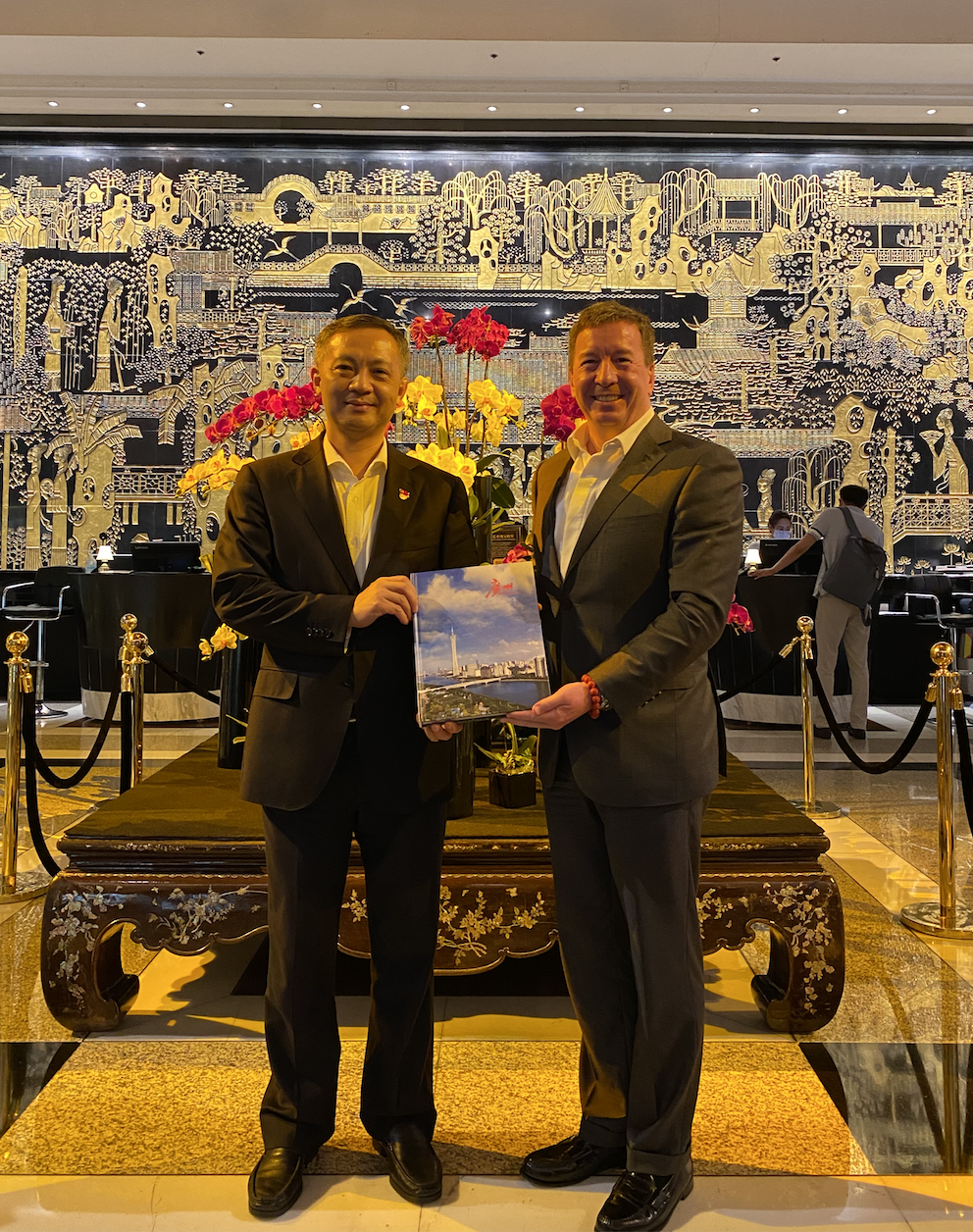 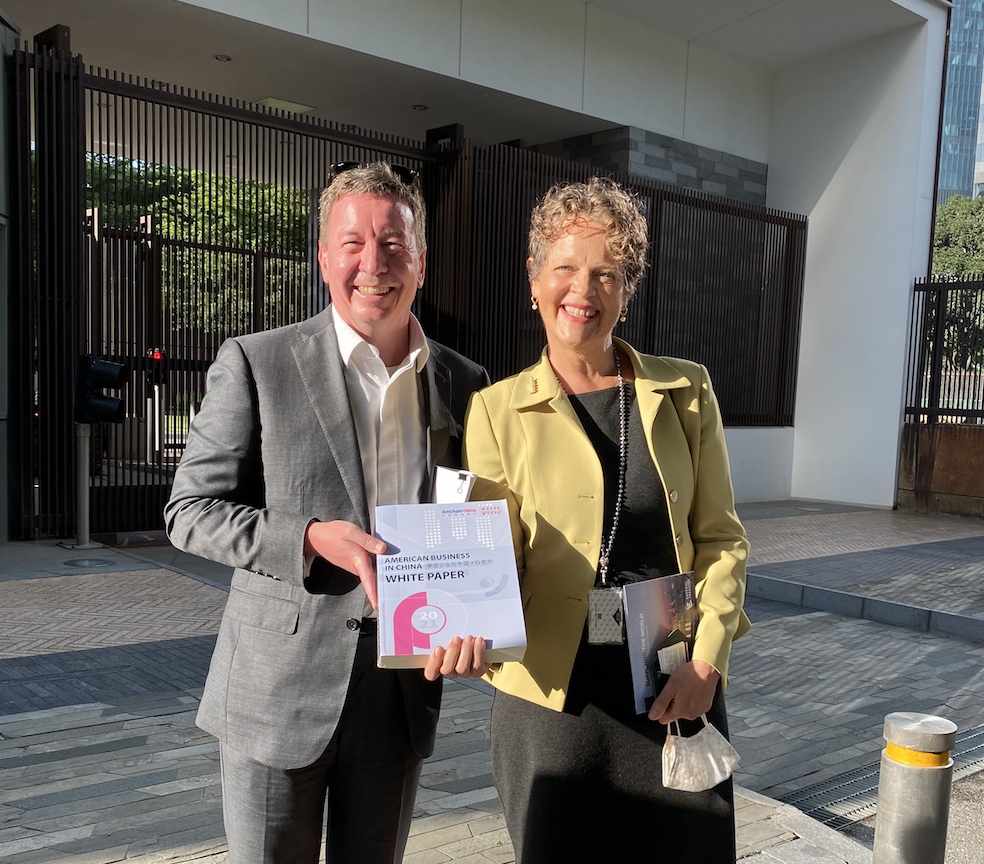 Gilligan presents the 2021 American Business in China White Paper to Betsy Shieh, Principal Commercial Officer at the U.S. Consulate General in Guangzhou after a briefing with Consul General Jim Levy, and other colleagues from the Consulate.

On May 28, the third and final day of the trip, there was another roundtable discussion (pictured below) on Shenzhen’s business environment, followed by a dinner. The roundtable and dinner were attended by Shenzhen Party Secretary, Wang Weizhong, and Mayor Qin Weizhong. During the discussion, several of the delegation’s senior executives spoke on the business environment and provided their recommendations for the Shenzhen Municipal Government (pictured below). The trip was also notable as it marked the first foreign affairs meeting that the Shenzhen municipal leaders had attended since their personnel reshuffle. 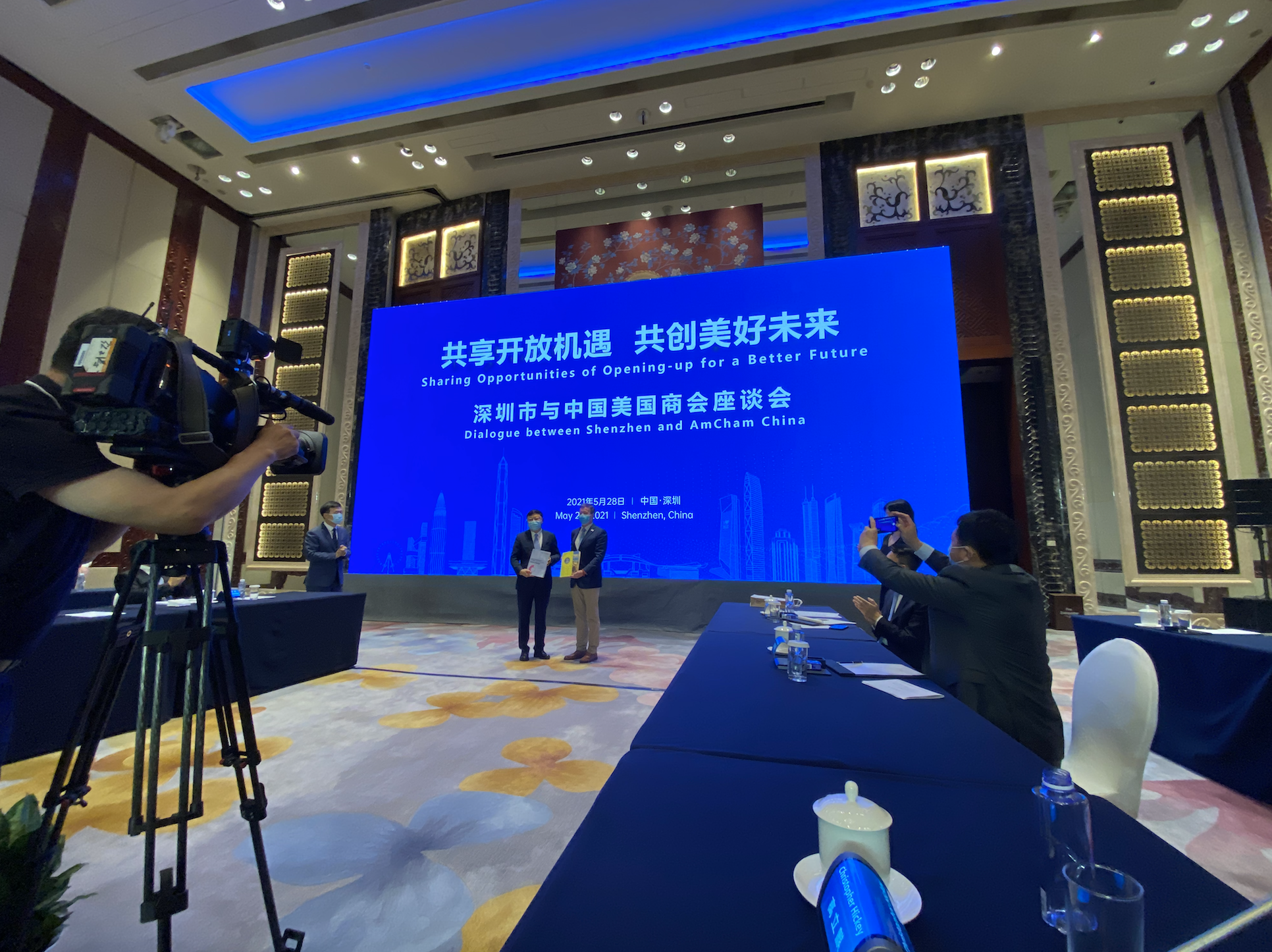 The three-day trip was ultimately a fruitful one, with Governor Ma explicitly expressing his interest in establishing a routine channel for AmCham China to bring annual delegations to Guangdong. Additionally, he emphasized the importance of staying open and continuing reforms against the backdrop of the development of the GBA. Finishing with assurances of continued cooperation, the second successful AmCham China B.I.O. trip to Guangdong ended on an optimistic note.