B2B Branding and Beyond with SAP’s Sun Lijun 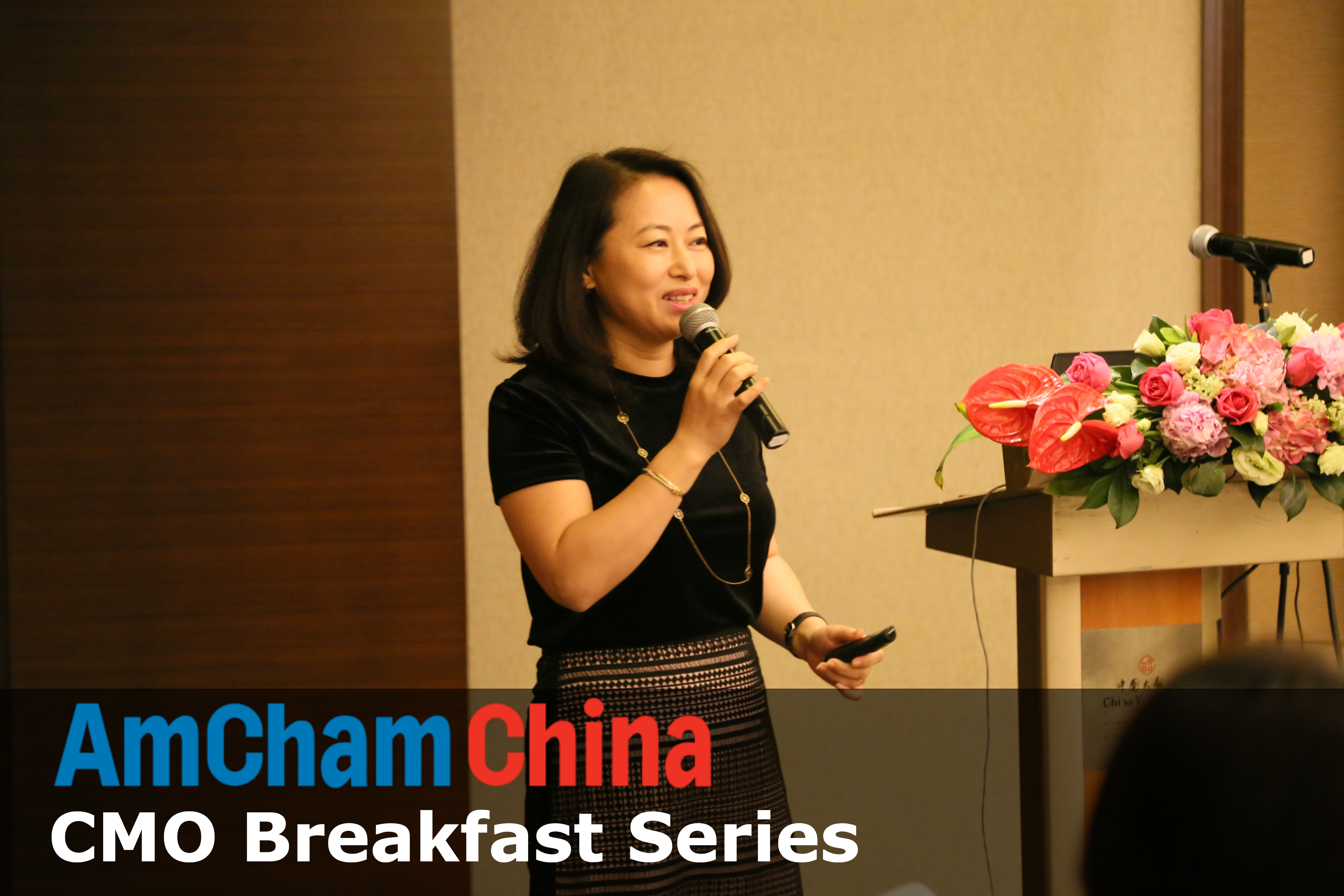 On June 14, AmCham China’s Marketing, Advertising, and PR Committee was delighted to host Sun Lijun, along with a group of marketing leaders from the AmCham China community, to join the third AmCham China CMO Breakfast event at the China World Hotel.

As the Global Vice President and CMO at SAP Greater China, Sun shared her experience helping SAP – a traditional B2B company – to transform its brand image in China. Through a series of award-winning integrated digital marketing campaigns, Sun and her team successfully redesigned and rejuvenated this traditional B2B brand in the digital age, elevated SAP brand awareness, and contributed to multiple consecutive quarters of double-digit company growth.

Sun began by sharing an analysis of several challenges originally posed by SAP’s brand image. As the world’s largest software provider, SAP ranks 17th globally as the most well-recognized brand in the world according to BrandZ, the world's largest brand equity database. Most people familiar with SAP considered the brand to be a traditional ERP provider. However, SAP is much more than that – the company has already transformed into one of the most important cloud and Big Data players, also venturing into many sectors of commerce. To achieve this transformation, Sun and her team needed to communicate the new brand image to not only IT professionals, but more importantly, to many new audiences, like CMOs, CFOs, CHROs, etc.

Changing the perceptions of traditional audiences, revitalizing the brand with cutting-edge technologies and innovation, and introducing SAP services to non-IT audiences in a simple and attractive language became the top goal for Sun and her team.

During her talk, Sun shared some of the award-winning campaigns led by her team, using real life examples to explain how a traditional IT giant and B2B brand could also become young and fun through good content and interesting story telling. Through this, SAP was able to achieve significant traffic growth and increased customer engagement through various digital channels.

It’s widely known that President Xi is a football fan. Knowing that President Xi would visit company booths at the Wuzhen World Internet Conference, Sun and her team decided to showcase the “SAP Sports One”, a cloud-based football solution enabled by Big Data and analytics technology – the same technology that helped Germany win the 2014 World Cup.

President Xi takes note of an SAP convention booth based on its football focus – a plan by SAP to catch his eye.

This allowed SAP’s booth to stand out and successfully attracted Xi’s attention. Catching Xi’s eye caught the eye of the media and resulted in tremendous media reporting, resulting in many new customers in turn. One of the newly acquired customers was the Suning football team which now employs the largest "football cloud solution" in the world.

Another award-winning sports marketing campaign led by Sun promoted a cooperation between SAP and the NBA. As the “brain” behind the NBA, SAP Solution’s data analysis provided critical and valuable data resources for coaches and players to improve their performance.

SAP uses their sports solution for data analytics to help coaches and players improve with technology.

This then led Sun to a pivotal question: How do I communicate this innovative success to basketball fans in a natural way? The key was good content at the right moment. When Kobe Bryant retired, Sun and her team quickly produced a series of content that leveraged SAP technology and presented first-hand data from Kobe’s entire career as means of recognizing his historic career and talent. By deploying carefully designed content with a timely execution, basketball fans immediately resonated with the content and began to build an emotional connection with SAP’s brand. Within 24 hours, the content attracted more than 20 million views, which contributed to more than a 50% increase in SAP’s brand recognition according to Nielson.

Not all brands have the luxury of engaging in sports marketing, but if you catch the right moment, marketing can be cheap and effective. When famous Chinese actress Sun Li was attending the Burberry Fashion Show in London, she coincidentally carried an umbrella brandishing the SAP logo.

An inexpenisve marketing campaign sparked by chance, excecuted with perfection for the digital age.

SAP’s marketing team quickly pounced on this opportunity, created content based on this stroke of luck, and posted it on WeChat and Weibo. The result was surprisingly profound. The post resulted in 34k views within 24 hours, and more than 1,000 followers commented on the post asking for the same umbrella. Aside from driving free traffic and engagement, this fun post also added a youthful and playful element to the brand’s personality.

The language of the IT world is difficult to understand, and how to effectively communicate SAP services and solutions to non-IT audiences can be even more difficult. To avoid this tall task, Sun and her team try to make every piece of content easy to read by pairing IT concepts with hot topics. By changing the traditional B2B marketing narrative, Sun and her team make boring IT concepts accessible to a wider audience.

“In this digital era, we must acquire a growth mindset, and build a forward-looking marketing organization that can adapt to any changes,” said Sun in her closing. “The world of B2B marketing has evolved dramatically. Selling is less about relying on face-to-face interactions, and more about a digital approach. Marketing is becoming more and more important in generating new leads and new growth for business.”

Another CMO Breakfast fed both body and mind, educating all in attendance on the cutting-edge of B2B branding.