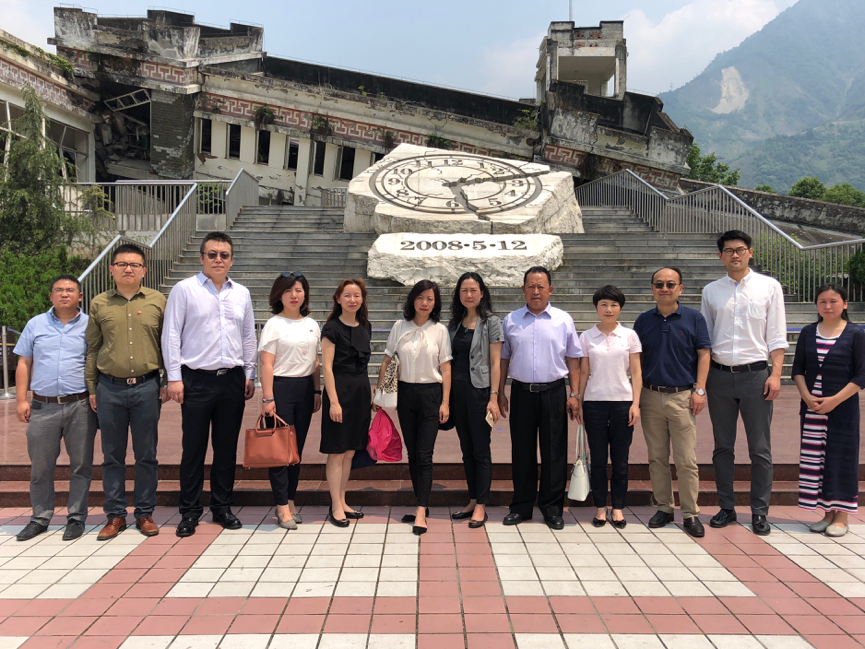 On May 15, the American Chamber of Commerce in China led a delegation comprised of fourteen representatives from eight companies to Sichuan province for a four-day Business and Investment Outreach (BIO) trip.

Sichuan, known as the Land of Abundance (天府之国) and home to approximately 1,300 American companies, was voted by AmCham China member companies as one of the top 10 provinces most effective at working with, and attracting foreign investors in the 2018 China Business Climate Survey Report.

On the first day of the BIO trip, the AmCham China delegation visited Wenchuan, paying tribute to the thousands of lives lost in the magnitude-8.0 earthquake that devastated Sichuan in 2008. 10 years ago, AmCham China and its member companies donated around RMB 600 million to rebuild the earthquake-stricken regions. Since the disastrous event, Sichuan, especially the heavily effected Beichuan Qiang Autonomous County, has undergone substantial rebuilding and development thanks to donations from all over the world, and special support from the Central government.

Symposium for Building Up the First-Class Business Environment in Sichuan

While in Chengdu, the AmCham China delegation was invited to the Symposium for Building Up the First-Class Business Environment in Sichuan, organized by the Sichuan Provincial Department of Commerce. The symposium was attended by several provincial Sichuan government departments, including the local Development and Reform Commission, Economic and Information Commission, Administration for Industry and Commerce, Customs, and other relevant departments.

At the symposium, the Sichuan government reported analyses of its business environment, shared studies on its business climate assessment system, and gave suggestions for how to build up a world-class business environment. AmCham China President Alan Beebe and AmCham China member companies noted the support that the Sichuan government has provided to foreign businesses in Sichuan, while also expressing the concerns and issues they often face in the region. These concerns included electricity reform, taxation, inconsistency among different government departments, and government transitions. Member companies also gave suggestions in regard to clearer and more effective enforcement, transparency in policymaking, and implementations.

Beebe concluded the symposium by thanking the local government for its support and arranging AmCham China’s BIO trip. At a critical time for the US and China, the world’s two largest economies, Beebe emphasized the importance of reciprocity. Recently returned from AmCham China’s annual Washington, DC Outreach trip, Beebe was acutely aware of Capitol Hill’s perspectives on China and their frustration with China’s lack of progress in ensuring a level-playing field, as well as the inconsistent regulatory interpretations and unclear laws.

For American businesses operating throughout China, the majority experienced revenues and profit growth in 2017. This is a trend AmCham China hopes to see continue, and will work to facilitate by acting as a bridge between member companies and both nation’s governments. “It’s more important than ever to strengthen communications between the two sides and eliminate misunderstandings,” Beebe said.

The AmCham China delegation also visited the Tianfu New Area under the jurisdiction of Chengdu. As a state-level new area established in 2011, Chengdu’s Tianfu New District was launched to push the development of the city’s modern industries and to fuel the economic development of the entirety of the west. Its increasing importance to support the Belt and Road Initiative has also attracted many Fortune 500 companies.

The local government also gave the delegation a tour of Guang’an (Shenzhen) Industrial Park, which is rooted in the Shenzhen-Guang’an strategic partnership. In addition to the tremendous support from Shenzhen, Guang’an is also going to great lengths to attract more businesses, foreign and domestic, to bolster the economy of the hometown of Deng Xiaoping, the chief architect of China’s economic reforms and China’s socialist modernization.

Zhu Hexin welcomed the AmCham China delegation, which consisted of companies from a variety of industries such as, pharmaceuticals, chemicals, consultancies, automotive, and manufacturing. During the meeting, Zhu introduced the significant economic development which Sichuan has undergone in recent years, as well as Sichuan’s advantages in ICT, automotive manufacturing, equipment manufacturing, bio-pharmaceuticals, and energy. He also noted the great change Sichuan has recently gone through, highlighting that the service sector has now surpassed the industrial sector, now a pillar of the local economy.

Noting the rapid economic growth of Sichuan, Beebe remarked that there are many areas in which American businesses can contribute to the local economy, and be part of the success story that is Sichuan’s economic development.

At the meeting, AmCham China members praised the Sichuan government’s efforts in improving the business environment and streamlining processes for businesses. They also expressed their interests in investing in Sichuan and eagerness to maintain productive communication with the local government regarding further investment opportunities to enter the local market, and regarding any new policies that would affect their existing operations or their expansion.