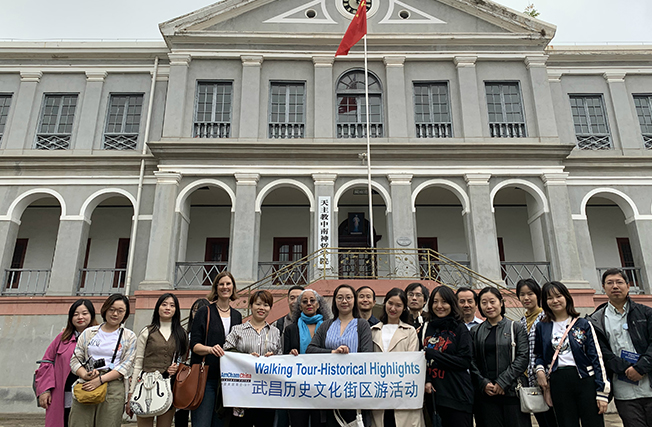 Around 20 participants from AmCham China member companies and local companies were in attendance. Yang Fan, the Founder of CECP, led the tour, providing bilingual highlights along the historic route with the help of some of the CECP volunteers.

The tour began and finished at the oldest college gymnasium in China: the James Jackson Museum, an archetypical exhibition of a mix of Chinese and American architecture. The well-preserved museum (built in 1921) exhibits a vivid history. its traditional Chinese architecture look from the outside. From its by its traditional Chinese exterior, one might have never expect that a modern western gymnasium with advanced ventilation system lay inside.

Following the Jackson Museum, the attendees visited a series of American-style architecture, including the first university chapel: Wenhua College Chapel; the Boone Memorial School (the literature school of Wenhua College). At the first site, Yang noted that Wenhua College used to be a missionary school of China and many people did know it well. Since then, Wenhua has become one of the best universities in Wuhan – the Central China Normal University, responsible for educating a prestigious line of intellectuals, such as Chen Duxiu, the leader of Chinese New Culture Movement.

Renji Hospital, founded by an American couple, was the next stop on the tour, following by the Zhongnan Catholic Academy of Theology and Philosophy; St John’s Catholic School; and finally the Qinglongxiang Christian Church.

Yang’s comprehensive explanations delineating the difference between architectural styles, constructions, historical introductions, and government restorations raised many of the participants’ concerns about the forgotten history and the future of those old western architectures in Wuhan.

He mentioned that the conflicts between the restoration and demolition of the old architectures puzzled the government. Even though there are some working groups trying their best to transform the old buildings to meet the needs of modern society, it is time-consuming and comes at great expense. Therefore, this tour was a good opportunity to visit these sites while they remain intact.

Over the course of the three hour tour, everyone interactively talked to each other and shared their own experience with the Wuhan city. In the end, all the participants spoke highly of the tour and said they had really enjoyed it, mentioning the great benefit from understanding the local history and culture.

AmCham China Central China Chapter would like to give our special thanks for great support from China Endangered Culture Protector (CECP).