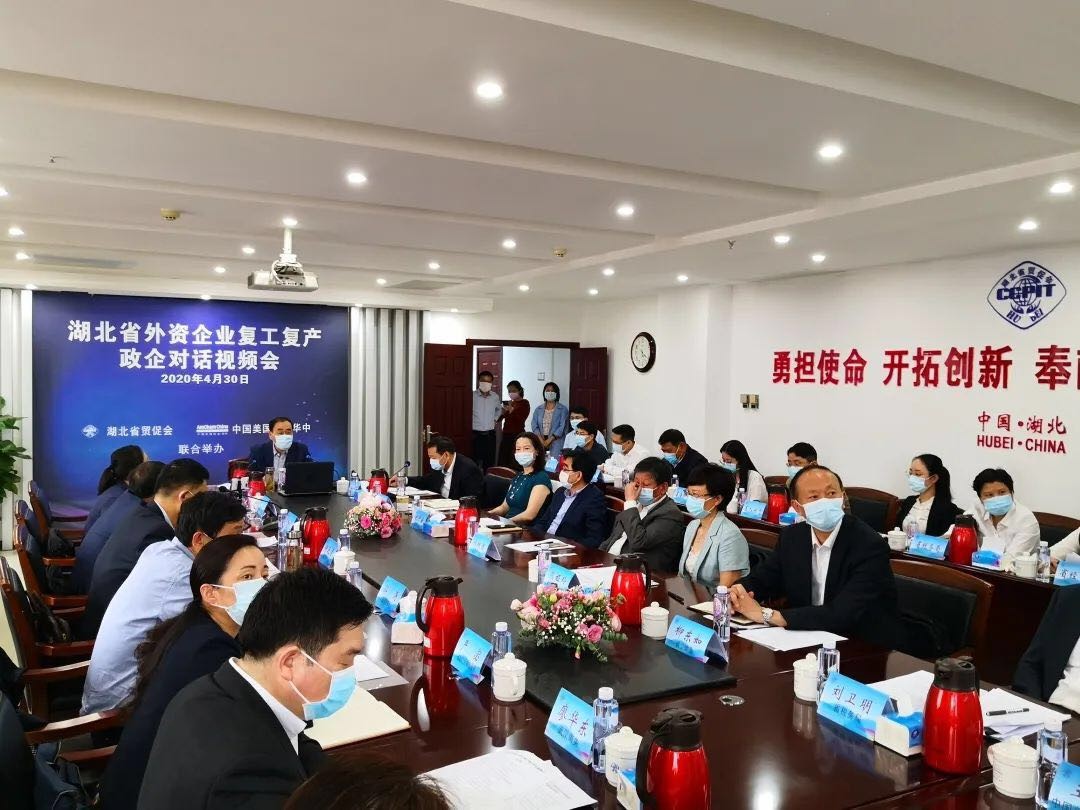 On April 30, AmCham China’s Chairman Greg Gilligan, Vice Chair Gloria Xu, and President Alan Beebe attended a conference call with officials from the Hubei government and the China Council for the Promotion of International Trade (CCPIT), in which the Chamber’s leadership expressed their gratitude to officials at all levels of government in Hubei province for fighting the COVID-19 epidemic and supporting AmCham China member companies during these uncertain times.

Close to 70 member companies participated in the call, highlighting Hubei’s prominent position within China’s foreign business and trade development. Minister Counselor for Commercial Affairs at the US Embassy in China, Cynthia A. Griffin, also attended the online meeting and delivered a speech.

The conference call was jointly organized by AmCham China’s Central China Chapter, and the Hubei branch of CCPIT. It was the first such meeting held after the epidemic outbreak in Hubei. Zhao Haishan, Vice Governor of Hubei Provincial People’s Government, led 14 provincial and municipal government departments in their attendance of the conference. During the meeting, government representatives answered more than a dozen questions raised by member companies about relevant policies for foreign enterprises in the province.

In his remarks, Zhao referred to the meeting of the Standing Committee of the Political Bureau of the CPC Central Committee, which has designed a host of policies to support the economic and social development of Hubei. Zhao showed appreciation to AmCham China and its member companies for their strong support in the fight against the epidemic and said he hopes to strengthen cooperation with AmCham China moving forward.

In his remarks, AmCham China Chairman Greg Gilligan said that the Chamber appreciates that both the people and economy of Hubei province have faced tremendous pressure in the fight against the outbreak, and that government officials at all levels have been working day and night to protect people’s livelihood, ensure employment, and protect supply chains.

Gilligan added that the Chamber is particularly grateful to the various support offered by the Hubei provincial government, the city of Wuhan, and other cities and development zones in helping to stabilize foreign investment and trade, and working with AmCham China’s member companies to overcome difficulties as they seek to resume normal operations.

Gilligan noted that many companies attending the meeting are long established in Hubei, and have been crucial to Hubei’s development across a range of sectors. “This is a testament to the importance that our member companies place on Hubei Province as a market and supply chain hub,” said Gilligan. “Since the outbreak broke out in January, our member companies have donated more than RMB 540 million worth of medical supplies and money to Hubei province and the whole of China in their fight against the outbreak. This is the best proof that our members have been ‘in China, for China’.”

AmCham China Vice Chair Gloria Xu said that Hubei province had introduced a series of policies and initiatives, with a view to optimize the investment environment to achieve phased results. She added that since late January, Hubei had implemented very strict prevention and control measures, making great contributions to the prevention and control of the outbreak at great economic cost.

“Although the economy has been hit in the short term,” Xu said, “We have seen that the foundation of Hubei’s economic development is still solid, and its position in the global supply chain in advanced manufacturing, agricultural food industry, high-tech research, and development in other fields has not changed.”