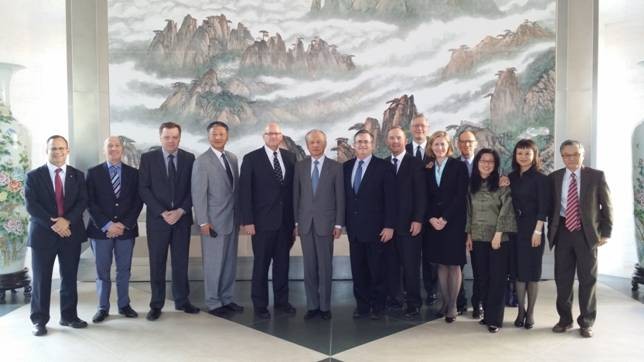 On April 28, the Chinese Ambassador to the US Cui Tiankai met with the AmCham China D.C. Outreach delegation at the Chinese Embassy in Washington, D.C. – the third time such a meeting has taken place with Cui.

AmCham China Chairman James Zimmerman voiced members’ concerns about the changing business environment for foreign entities operating in China. Cui responded, saying he was painfully aware of these concerns. He shared his views on a number of key issues:

1. International environment in the 1990s was very different from now. Then, growth was the focus. Today, China faces challenges vastly different from the ones 30 years ago.

2. President Xi is pushing for a comprehensive reform. This, rather than growth, is now the focus of Chinese leaders.

3. The US and China have built up a strong working relationship. The two countries need to work together, as they have shared interests.

5. President Xi will make an upcoming visit to the US in September.

Zimmerman thanked the Ambassador for his thoughts, and said that the business community wants to be helpful in the process.