Continuing the Conversation on Breast Cancer 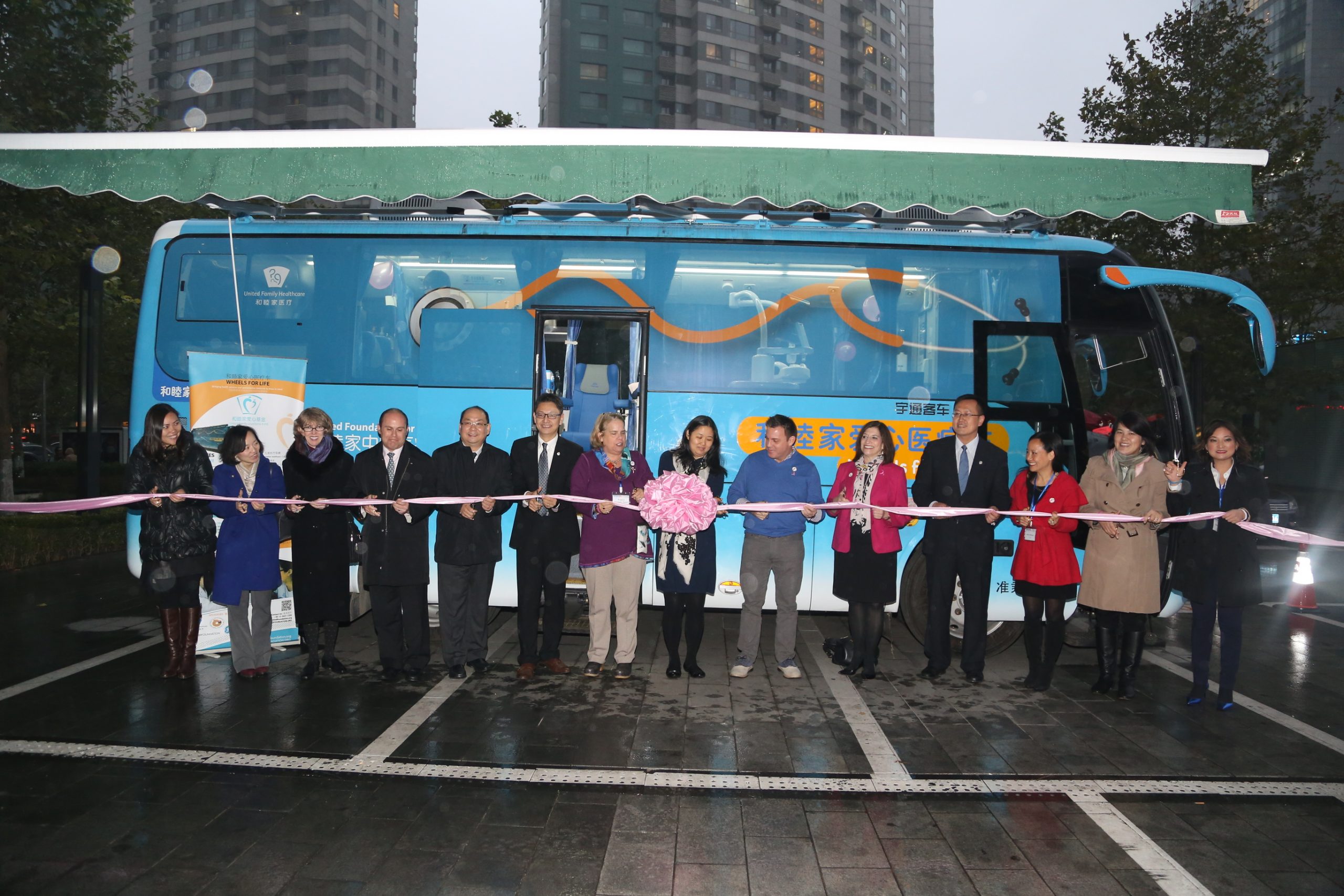 Two years ago, three allies for breast cancer control gathered at the AmCham China Conference Center and brainstormed new ways of bringing care to the migrant workers of Beijing. Migrant women in Beijing number in the millions, and while they suffer the same higher rates of breast cancer for urban women, they do not have the same awareness of breast cancer risks or access to screenings and care that other urban dwellers do.

“Let's go there, let's be there for them,” said Frances Fremont-Smith, Executive Director of the United Family Charitable Fund (UFCF).

So these allies – UFCF, Susan G. Komen and GE Healthcare – set out to make a mobile healthcare unit that provided underserved populations with not just general health examinations but also breast cancer screenings with the latest ultrasound technology and educational materials provided by Goldman Sachs. The result, called “Wheels for Life,” rolled up for visitors to see for the first time during a Nov. 10 AmCham China event discussing breast cancer trends and challenges at the Penn-Wharton China Center.

“When partners come together across sectors, innovation happens,” Fremont-Smith said before the pink ribbon cutting ceremony. “We've seen it today.”

In China, though, it's hardly a debate that awareness and screenings need to increase nationwide. For women in China, breast cancer is the most commonly diagnosed form of cancer, and one of the deadliest. Between 1990 and 2005, breast cancer mortality in China rose 155 percent, whereas the US saw a 21 percent drop.

Also, due to a variety of factors, Chinese women diagnosed with breast cancer are decades younger than women in the US. While risk for American women generally goes up after age 40 and is highest for women over age 70, in China, many get their first diagnosis in their 30s or 40s.

This tendency toward younger patients gained a very real face in January, when pop singer Yao Beina died from breast cancer. The death of the “Voice of China” star at age 33 was shocking to many, and the news rippled through social media. Yao first received treatment for breast cancer in 2011 and went on to be a “China Pink Ribbon Campaign” ambassador, raising awareness for a younger generation of women.

In China, it's more often that women “hear the news too late,” said Dr. Judith Salerno, CEO of Susan G. Komen, which funds more than $889 million in research and $1.95 billion to screening, education, treatment and psychosocial support programs across 60-plus countries.

The way out of this problem? Educational campaigns and increased access to screenings. Dr. Leng Jiahua from Peking University Cancer Hospital said building up education happens in three stages: first to patients, then to high-risk groups and finally to the general population. Right now, he's at the first stage as he works toward setting up an on-site patient education center at his hospital.

Susan G. Komen is working to expedite the process by providing technical assistance to the Pink Alliance Toolkit. This public-private initiative has a trainer program to educate community members and empower them to speak to other women. The underlying reason: people can learn more when they're hearing it from someone they trust. Therefore the Pink Alliance is working toward getting these educational materials into workplaces, neighborhoods and other communities.

The Wheels for Life bus comes equipped with the GE ABUS Ultrasound, a form of screening determined to be more effective for Chinese women than mammograms. That's because Asian women tend to have a denser breast than Western women, meaning more fibrous or glandular tissue and not as much fatty tissue. When used on a denser breast, a mammogram can be a rather blunt tool.

Ultrasound technology isn't foolproof, either. Dai Ying, Chief Marketing Officer of GE Healthcare, said “it's only good if you have a good technician.” However, GE Healthcare developed an automated device – the one in the Wheels for Life buses – that cuts out the risk of an unskilled technician. Once a nurse sets up the equipment, the device does the rest.

During its first year in soft launch mode, Wheels for Life plans to provide screenings to 500 migrant women from 28 partner organizations, such as orphanages, foster homes and migrant schools. The bus will go back to the same communities several times throughout the year to develop a sense of continuity in care.

Fremont-Smith said she believes this is a model for care that will be easily able to demonstrate impact. She said that's how you get the government to notice and ultimately support a project.

“Impact, that's what the government picks up,” she said. “We hope Wheels for Life is that model that gets replicated.”

Wenchi Yu, head of Office of Corporate Engagement Asia of Goldman Sachs, also remarked on the importance of government support for her company's HerCare educational initiative.

“Aligning our giving with government initiatives helps the impact of the program,” Yu said, adding that through the partnership with the All-China Women's Federation, awareness increased 35 percent, and screenings were up by 40 percent. Though the government can lead an initiative, she said, it needs the private sector to provide content and resources.

Salerno commented on how government needs to take the lead in the broader picture. A country needs to have strong healthcare system in place in order to make a deeper impact.

“It's important that we understand that early detection can only save lives if it's followed by early treatment,” Salerno said. “You have to have a system of care, make sure those systems are in place and those connections are made. From my experience in the US, those are the hardest things to do.”

Indeed, China's rapidly developing society and healthcare market is racing to meet needs, a situation Fremont-Smith compared to “building the boat while sailing.”

Where research needs to go next

During the event's panel discussion, there were calls for increased research into certain areas of breast cancer. Salerno, while citing a recent study showing urbanites had higher rates of breast cancer than rural women, also mentioned that study may not be entirely representative. She said the study offered more of a clue into what's happening.

“I'd like to see more epidemiology into all the factors,” said Salerno, board-certified physician in internal medicine and Harvard Medical School graduate.

Fremont-Smith said potential risk factors for Chinese women include changing lifestyle, an increase in women choosing not having children and, for those who do, more refraining from breastfeeding.

A tour of the Wheels for Life bus illustrates the collaborative nature of the project. There's the GE Healthcare equipment, the Goldman Sachs HerCare educational materials, the funding from United Family Healthcare and the support from Susan G. Komen. On a rainy fall day, the bus was warm and inviting, the faces smiling. The bus is a collaboration in motion and a strong model for how companies can best utilize their values to impact society.