You are here:
Featured StoriesLatest NewsNews 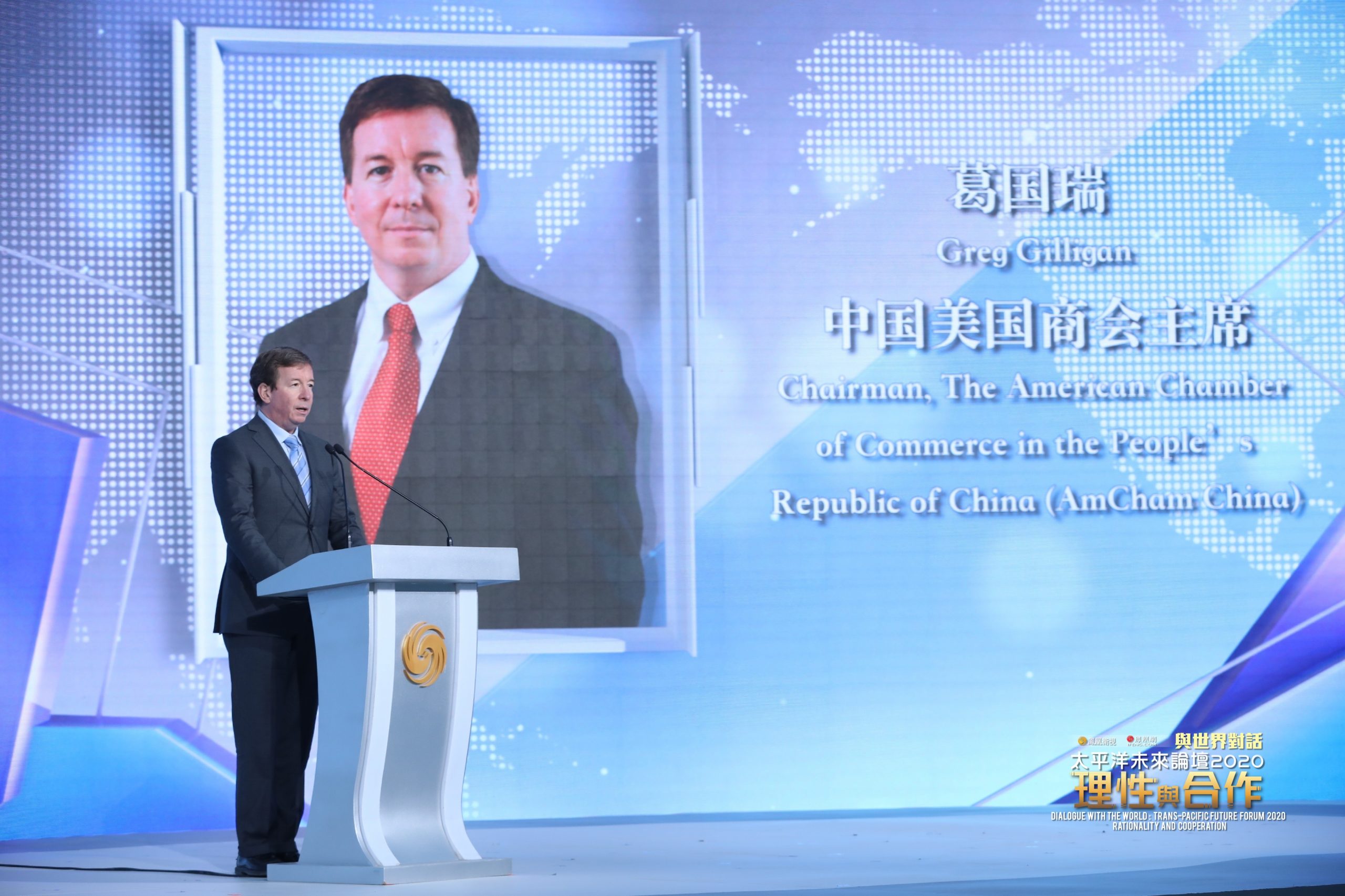 AmCham China announced a partnership agreement with Phoenix TV, strengthening the links between the Chamber and the media industry in the process.

AmCham China officially announced a partnership agreement with Phoenix TV at the Trans-Pacific Future Forum 2020, which was held in Beijing on December 16. The agreement cements the strong ties between the Chamber and the media industry, leading to more potential cooperation with media partners in the future. It also offers another major influential channel for foreign companies in China to make their voices heard.

In the future, the Chamber will work with Phoenix TV to design a series of thought leadership events with the theme of US-China economic and trade relations to give a platform to thoughtful voices and enhance influence. Chairman of AmCham China, Greg Gilligan, and Vice Chair, Gloria Xu, together with President Alan Beebe, attended the forum.

Gilligan gave his opening remarks about the opportunities and challenges ahead in the US-China relationship. Gilligan commented on the existing tensions between the two countries, noting that, as the two largest economies in the world, China and the United States will experience inevitable friction, and the structural issues in bilateral trade relations are not likely to change much due to the change of administration in the White House in 2021.

Gilligan suggested that the focus of both political parties in the US will still be long-standing issues, such as intellectual property protection, market access, and technology transfer. Meanwhile, he pointed out that the geopolitical and ideological competition and differences between the two countries will have an inevitable impact on economic and trade issues and on the cooperation between companies in the two countries. As a result, Gilligan stated that he hoped both governments can limit geopolitical disputes to an appropriate scope to make room for commercial cooperation. He also mentioned that the Chamber will try to avoid non-commercial issues and instead focus on ensuring the sound development of business cooperation between Chinese and American companies. This way, they can explore more commercial opportunities together and strengthen the bond between the two sides.

Gilligan later talked about the improvements made after the signing of the Phase One trade deal, saying he was pleased that it has given the two countries a certain degree of predictability, and that both countries have seen some tangible results from this agreement. Although the global economy suffered a huge impact in 2020 from the COVID-19 pandemic, Gilligan said that AmCham China is pleased to see the Chinese government’s continuous efforts in opening up to foreign investment in the financial sector, the procurement of agricultural products, and the protection of intellectual property rights.

Gilligan also shared his perspectives on improvements that need to be made from Chinese policymakers in terms of policy implementation and consistency. He noted that there have been some differences between the formulation and implementation of policies, and therefore suggested the Chinese government better carry out the policies.

Gilligan said he hopes that the Chinese government can gradually improve the system of soliciting opinions when making policies so that enterprises can relay their problems encountered in investments and operations more confidently and truthfully. He also added that effective communication between enterprises and governments is of great significance in industry supervision and business operations. Only by effective communication, he said, can the policies find their true basis. He added that the Chamber very much wants to see a business environment based on mutual trust, where governmental policies are well implemented and enterprises can receive the full support of the government.

In the issue of bilateral cooperation and international cooperation at large, Gilligan found himself returning once again to Premier Zhou Enlai’s well-known words – seeking common ground while reserving differences – and called on everyone to put aside conflicting issues for the time being and focus on solving the issues that are important to the entire society, such as public health, food safety, energy innovation, environmental protection, and other pressing problems. These are the areas where both parties have reached a broad consensus and established a basis for cooperation in the past.

However, Gilligan also mentioned that the business world must be prepared for difficulties that will continue to affect business cooperation between the two countries. These concerns include the partial decoupling between China and the United States, protectionism faced during the adjustment of global technology and manufacturing supply chains, vaccine nationalism in the field of public health, obstacles brought by geopolitics in the training of talents, educational cooperation, cultural exchanges needed by international companies to operate, and more. He concluded that this Forum, which had the theme “Rationality and Cooperation” happened at the right time and was of great importance. Moreover, he said he hoped that the voices of AmCham China can be heard and understood by everyone through Phoenix Television and truly “influence the influential”. 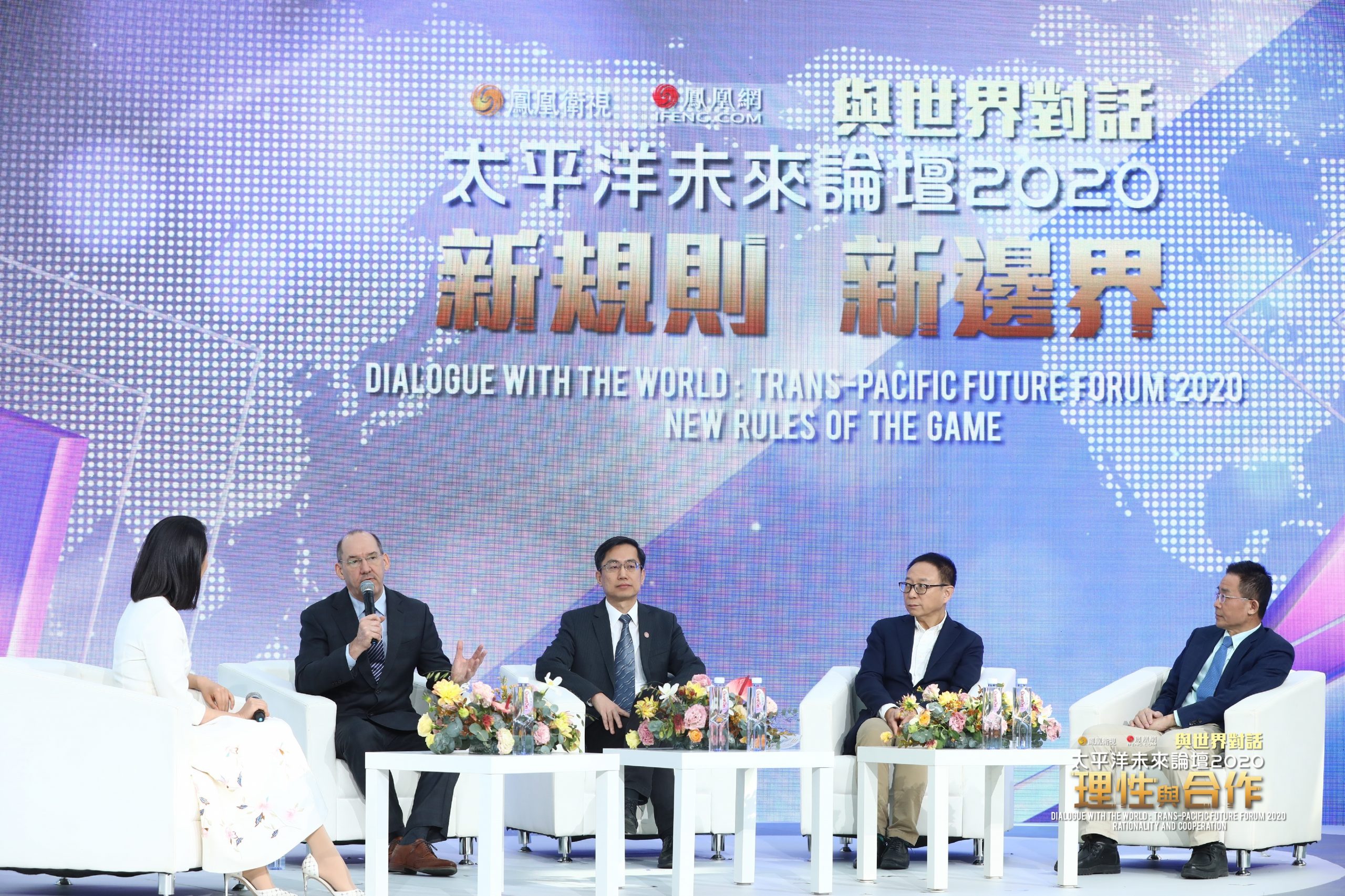 Technological Differences Between the US and China

AmCham President Alan Beebe took part in the technology panel discussion and exchanged ideas with other guests on the US-China relationship and potential areas where China and the US could cooperate. Beebe pointed out that the US-China relationship is never one-sided, and the two countries should understand their areas of commonality and difference. He said he is positive that there are many opportunities where China could change for the better. One of the sources of tension, Beebe believes, is the fundamentally unequal playing field in the corporate sector. Limited market access, particularly in the technology sector, has been a source of frustration for many companies. Compared with a relatively more open market in the US, he noted that there is still a lot of work to do on the Chinese side.

Looking back on the past 20 years, Beebe said that Chinese tech companies have achieved remarkable progress, noting the ingenuity and hard work of Chinese companies and its people. Beebe also admitted that the US needs to catch up in some areas, like digital payments. With regards to technological cooperation between the two sides, he noted that it is better to focus on where the two parties can cooperate rather than set up global standards.

Beebe suggested that what the two countries – not to mention the whole world at large – need now is evidence that cooperation can actually be beneficial; hence, in his opinion, the two academic and business communities need to leverage each other and produce favorable outcomes in the short term. Healthcare would be a key area that the two countries can work on together.

One quick win for bilateral healthcare cooperation suggested during the panel discussion would be the equitable and global distribution of COVID-19 vaccines. Moreover, bilateral cooperation on areas where science converges with digital technology to solve health-related problems like diabetes could also bear fruit in a quick manner.

Beebe mentioned that a routine dialogue between China and the US is possible, but that certain challenges should be expected. To this point, he reiterated that, in order to find solutions, both governments should work concertedly to ensure a level playing field for companies. He also touched upon a disturbing trend that there has been a decline in the number of Americans who come to China to study or live and who learn the Chinese language. He said he thinks that more work needs to be done in order to set the foundation of understanding the Chinese culture and ensuring the flow of exchanges.

Outlook on the Bilateral Trade Relationship

AmCham China Vice Chair Gloria Xu attended both the program Tiger Talk – one of Phoenix Television’s flagship shows – and the trade panel discussion, sharing her opinions on the outlook for the bilateral trade relationship during the Biden administration.

President-elect Joe Biden will assume office as the President of the United States in January 2021. Xu noted that, because of the global influences of the US and China, the relationship between the two countries is always the focus of the diplomatic world; however, she conceded that this relationship had become increasingly strained. Xu said that she hoped the two governments could show more respect to agreed rules when dealing with differences during the Biden administration.

Xu said that trade negotiations between the two countries have always been the priority on their agenda and a focal point of the business world. She noted that AmCham China helps link American companies and the Chinese market, and that the Chamber would like to promote effective cooperation between businesses in the two countries. Talking about the influence of the US-China trade talks on American enterprises in China, Xu noted that the influence varies for different sectors. However, she said that it is certain that the trade dispute has presented obstacles for American businesses in China.

Biden recently appointed Katherine Tai as the next United States Trade Representative. As a Chinese-American, Tai’s role in the trade talks has attracted more and more attention. Xu pointed out that the approach of Biden’s trade team towards China is still unclear. She said that AmCham China represents the interests of member enterprises and believes the change in US leadership will present an opportunity for both parties to further communicate. Although there are many challenges on trade disagreements, the trade representatives from both countries have spoken highly of their counterparts and Xu said she believes the previous rounds of talks have laid a solid foundation for future negotiations.

Xu declared herself to be optimistic about the future of the US-China relationship. She mentioned that China and the US showed the world that the two nations could still solve problems together by negotiating when they signed the Phase One trade deal, with stricter regulations on intellectual property protection, China’s purchases of American products, and tariff reductions among the areas where progress has been made. Xu said that AmCham China hopes the Chinese government and the Biden administration would restart trade talks as a way to rebuild trust between the two sides.

Besides appearing on Tiger Talk, Xu also discussed the influences of the signing of the Regional Comprehensive Economic Partnership (RCEP) during a panel discussion. She indicated that RCEP is beneficial to enterprises in three ways. First, the reduction of tariffs could lead to the improvement of supply chains in the Asia-Pacific region; second, information transparency could make it easier for companies to refer to local regulations; third, RCEP reduces a series of burdens on labor and procedures for enterprises. In response to the pressure to change the supply chain layout of American companies by “returning manufacturing to the United States”, Xu said that many multinational enterprises in China have instead applied a “China+1” strategy to mitigate risks and remain flexible.

In conclusion, the Forum – which was co-hosted by AmCham China and Phoenix Television – was hailed a great success, with many fascinating discussions taking place on site, while also laying the groundwork for future cooperation.