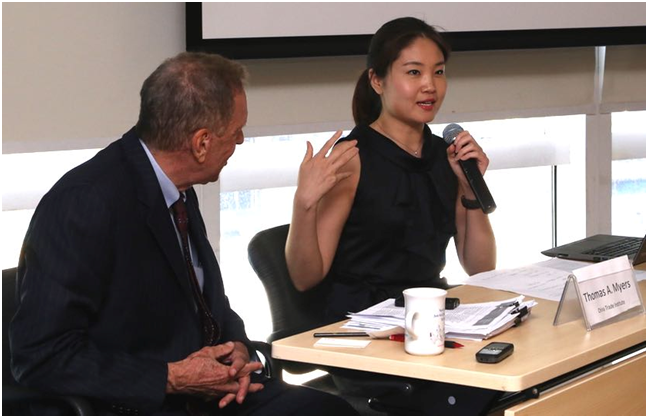 In 1939, at the outset of World War II, former British Prime Minister Winston Churchill famously described Russia’s intentions as “a riddle, wrapped in a mystery, inside an enigma.” Thomas Myers, CEO and President of the China Trade Institute, said that quote aptly describes doing business in China as well.

The first step in unraveling that riddle for many businesses is due diligence, the necessary investigative process for mitigating the risk of fraud and corruption. For the June 30 event “Using Due Diligence to Increase Financial Transparency,” Myers was joined by Mike McCourt, Senior Manager for Control Risks, Bo Yue, Compliance Counsel at Steptoe & Johnson LLP, and Juliana Ma (pictured), Senior Investigator for the Mintz Group. Each panelist had a unique area of expertise, and other due diligence professionals in attendance also offered their opinions and addressed specific questions about issues they were facing in their businesses.

Inadequate due diligence can have ruinous costs, including bankruptcy and jail time. Where effective due diligence is impossible, walking away from lucrative deals may be necessary to avoid risk. The speakers pointed out that this often occurs because Chinese partners are hesitant to fully cooperate in due diligence. Thus, it's important to communicate that due diligence is in the best interests of all parties.

At the same time, there is such a thing as being too thorough. For example, it is possible to break data privacy laws by sending sensitive information out of the country. As the panelists made clear, conducting due diligence in a manner that minimizes risk, rather than creates it, requires a coordinated effort from all of the parties involved as well as the expertise of investigators in the field.

Kevin Harris is a Communications Intern at AmCham China.