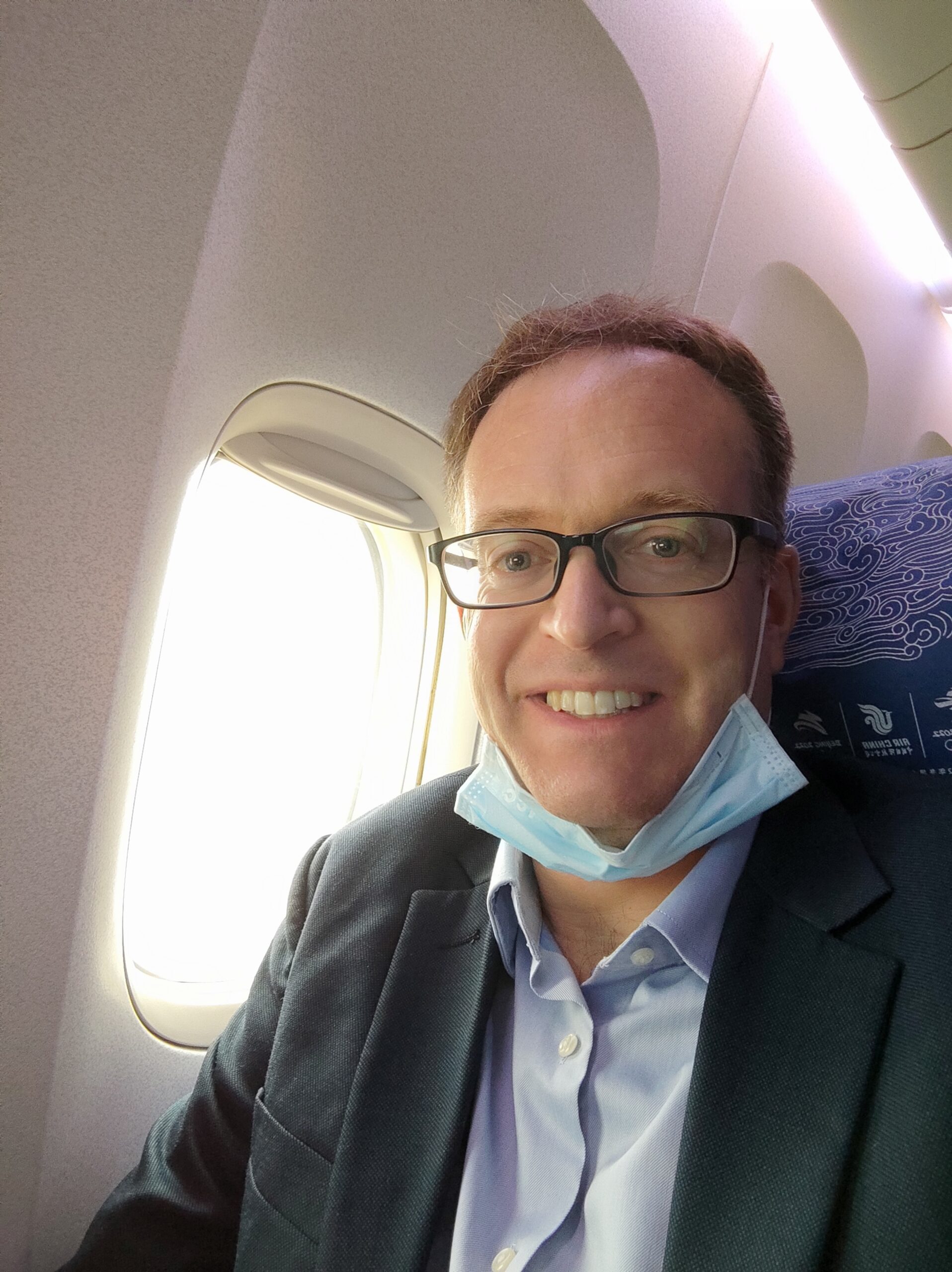 Family Ties in a Pandemic: Broken and Rebuilt

AmCham China’s Director of Marketing & Communications tells his personal pandemic story of how he and his family was initially stranded outside of China, followed by long months of separation, before settling into a new reality of “international commuting”.

More than two and a half years later, I still remember the final days of March 2020 as if it was yesterday. Word had spread on March 27 that China was effectively closing its borders the very next day, March 28. That presented a problem, because my flight to return was scheduled for March 29. I was stuck out of China, at least for the foreseeable future. I had visited Taiwan over the Chinese New Year holiday, just as cases were beginning to rise in Wuhan and the surrounding areas. Advice at the time was to stay put, so those of us from the AmCham China team who had traveled overseas did exactly that. We mobilized remotely by phone and on Teams calls and, within a month or two, the Chamber had launched the now ubiquitous webinar. It’s hard to remember a time without them.

My initial efforts to get back to China were complex, but only grew more complicated as the months went by. My family and I had valid visas, but anyone who needed to re-enter China at that time had to apply for a brand new one. However, because I was in Taiwan, there was no Chinese Embassy or Consulate at which I could apply. Taiwan residents usually do this by mail via Hong Kong. But to do that, you need to have residency in Taiwan, which I did not have. I’m a dual British-Canadian citizen but had initially entered China on my Canadian passport all those years ago, so was directed to the Chinese Embassy in Ottawa.

I contacted the Chinese Consulate in Ottawa, informing them that I had all the necessary documents and asking what else I needed to do. “You need to apply in person,” came the abrupt reply. Well, that was a problem. I had planned to do the two-and-a-half-hour direct flight from Taipei to Beijing. But instead I was being told that I needed to fly back to Canada on the other side of the world, where I would have to wait for weeks while my visa was processed; then, if I was lucky enough to get one of the few available seats on a flight back to China, I would have to pay handsomely for the privilege, before flying back around the world again. It didn’t seem to make sense on any level.

I did my best to think of alternative routes back to China. It wasn’t so much a question of getting around the rules, because the rules weren’t in fact clear to anyone. They were being inconsistently enforced, not just in different countries, but in different parts of different countries. In the end, I managed to get a visa processed in Canada, and returned to the mainland at the end of 2020, just in time to spend Christmas on my own back in Beijing, having emerged from quarantine in Xiamen. Unfortunately, by the time my new visa had finally materialized, the rules had again changed such that dependents of family members were no longer eligible for visas, so my family stayed behind in Taiwan.

Dashed Hopes for a Quick Reunion

My wife and I were confident that things would likely open up after the Chinese New Year holiday in early 2021 and that we would all soon be reunited back in Beijing. But as time went on, it became clear that this wasn’t going to happen. Winter moved into spring, and we started to plan for the summer. If my family still couldn’t return to Beijing by then, I would rejoin them in Taiwan – more than six months after I’d left them.

The initial weeks of exploration quickly turned into months of loneliness. In order to fill the extra time I now had, given I was no longer a hands-on parent, I decided to write a book, “Sporting Superpower: An Insider’s View on China’s Quest to Be the Best”, detailing my experiences since I’d first come to China as a sports journalist ahead of the 2008 Olympics up to, and including, the build-up to the 2022 Winter Games. In addition to keeping me busy outside of work hours, it helped me to focus during what I hoped would only be a short-term separation. But then the situation, once again, took a turn for the worse. Taiwan had its first real COVID outbreak in May 2021 and closed its borders. With no way of me getting to Taiwan, and no way for my family to join me in China, we were stuck in a painful limbo that lasted into the fall.

Sporting Superpower, written while solo in Beijing during 2021, was published shortly before the 2022 Winter Olympics

In my role as Director of Marketing and Communications at AmCham China, I don’t typically attend government meetings. But on one specific occasion, I did. I was part of a delegation to a meeting with officials from both Beijing municipality and Chaoyang district, at which we were asked to outline some of the challenges facing foreign nationals. I gave a heartfelt account of my own separation. After one too many video calls with tearful kids asking when I was coming back, it wasn’t hard to convey to the officials how I felt.

With no way to get dependents of family members back into China, my best chance of a family reunion was to get back to Taiwan. There were two ways to do this and I pursued both avenues furiously. As luck would have it, they both came through at exactly the same time in September. I hopped on the first flight back to Taiwan, where I spent two weeks in quarantine.

On seeing me for the first time after more than ten months apart, my daughter touched my face to check I was real.

To avoid too much emotional upheaval to the children’s daily routine, my wife and I elected not to tell them I was coming and to give them a surprise. When I got out of quarantine, we set up an elaborate treasure hunt for our children, during which they collected clues which led to the treasure – me! My son, then 9, hugged me tightly with tears of joy in his eyes and didn’t want to let go. My daughter, 6, wasn’t quite so sure. Her first instinct was to touch my face to check I was real, she said. She had thought, perhaps, that I was someone dressed up as me, she later confided.

After four weeks with my family, which passed all too quickly, I returned to the mainland, where I had to spend another three weeks in quarantine in Shanghai before I could get back to Beijing. The next stretch through the first half of 2022 was quite long, but it always felt like there was a light at the end of the tunnel since I now had a way back to Taiwan, if necessary. My initial plan had been to reunite with the family in Canada in the summer. But in May this year, as cases surged in Beijing and we all moved to work from home, I flew back to Taiwan a few weeks earlier than planned since it made no practical difference whether I was working from home in Beijing, or working from home in Taiwan – in the same time zone, just a little further south.

Team workouts during work from home periods have helped to keep the team engaged and energized.

Just like the first half of 2020, I wasn’t alone in my remote working. Managing my team remotely has had its challenges, though I’m proud to say I think we, collectively, have done a great job. Through a combination of daily online video check-ins and tracking all our projects on a Trello board to keep us all on track and accountable, productivity has never been better. We even started to do team workouts to keep the energy levels and motivation high.

After a summer outside of the mainland, I again returned to Beijing this fall to complete my 10th and 11th weeks of quarantine since the start of the pandemic. At this point, I’m used to it, but the psychological preparation beforehand – especially after several months on the “outside” – is arguably worse than the quarantine itself.

However, nearly three years into the pandemic, there’s a constant nagging about whether we, as a family, are doing the right thing, both from family and friends as well as a level of self-doubt, too. In a fluid situation like this, ever-changing inputs combine to produce ever-changing outcomes, making stability harder to achieve than ever. Plan A has always been to bring the family back to Beijing; the kids miss their friends – at least the ones who are left – and their toys, too. But they’re also settled into new lives and schools in Taiwan, where their Chinese-language environment ticks one of the main boxes for which we’d initially stayed in China. Visas aside, the looming threat – and reality – of online schooling, plus the constant drag of regular testing and venue closures, doesn’t make a convincing argument for a near-term return to Beijing. I’ve witnessed the mental health struggles of those in lockdowns and experienced enough of the challenges myself to know that environment is everything when it comes to school-aged children flourishing.

As I end this article, my flight has just touched down in Taipei. Our office in Beijing has closed – again – so I’ve retreated once more to Taiwan to work from home there. I’ll be back again after the holidays, assuming the COVID-situation in Beijing has settled down and we can return to the office. It’s amazing to think that a simple 10-day trip in January 2020 has morphed into this current situation, but with terms like “work from home” and “webinar” now ever-present in corporate jargon, my own situation of “international commuting” appears to be my new reality.

This article is from the AmCham China Quarterly Magazine (Issue 4, 2022). To access the entire publication for free, sign up on our member portal here.