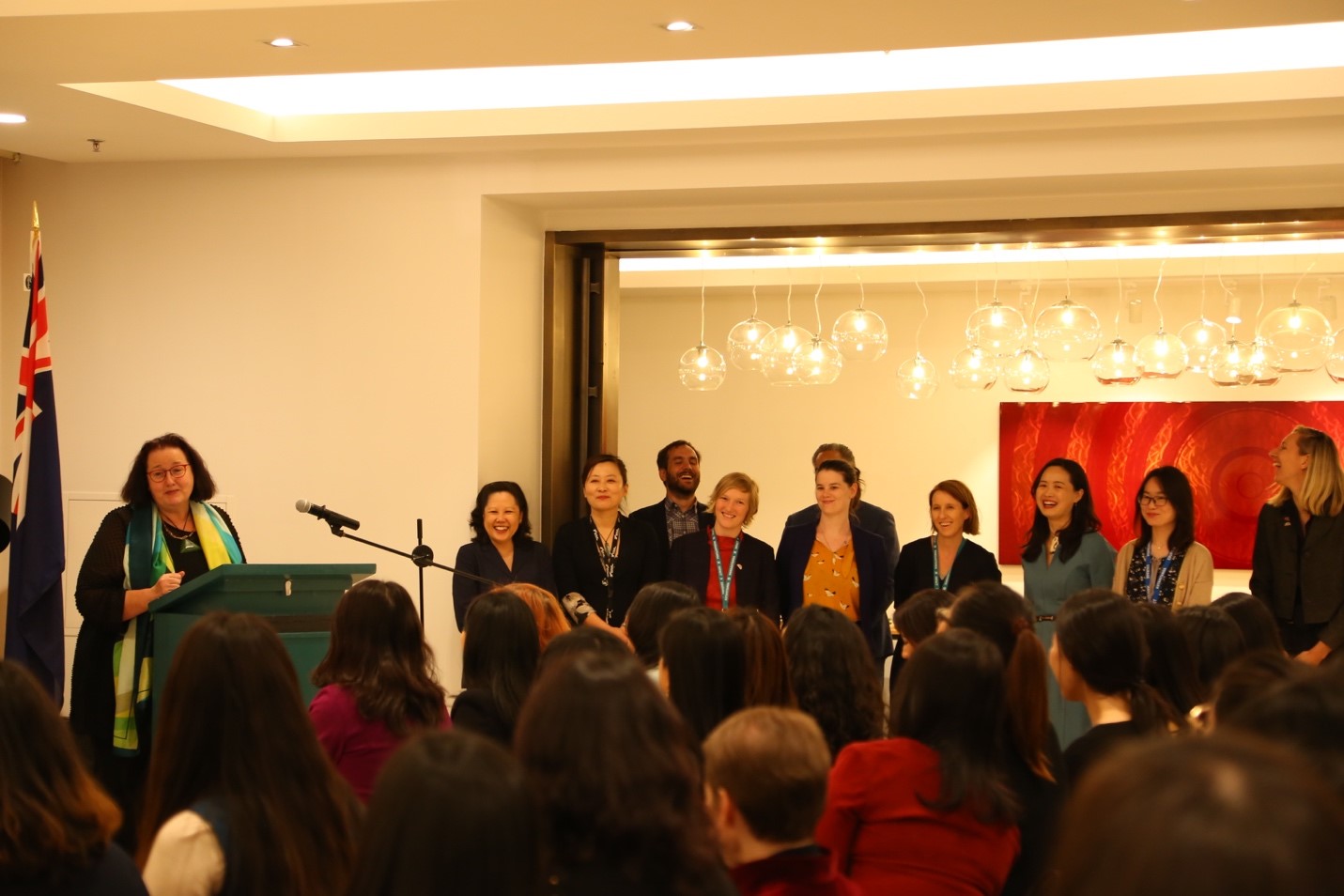 In the lead up to the 2019 Women Economy Summit, the G8 Inter-Chamber Series exemplifies the values, perspectives, and insights the Summit embodies. To register for the Summit and continue the conversation, click here.

Ambassador Fearnley began the event with opening remarks on New Zealand’s egalitarian values and global progress on women’s rights. Alongside the substantial advancement in women’s livelihoods worldwide, the Ambassador reminded the audience how women and girls around the world are disproportionately vulnerable to poverty, family violence, and violent conflict. She invited everyone to celebrate how far we have come, while at the same time keeping in mind that we have a ways to go.

Qian (Louise) Liu, Managing Director at Economic Group and co-Chair of the Women’s Professional Committee kicked off the panel discussion with an introduction of the G8 initiative. Gender 8 (G8), jointly initiated by eight chambers of commerce and foreign embassies in Beijing, aims to showcase inspiring and professional women, and serves as a platform to enable established leaders to share the career stories and insights, as well as their respective countries’ policies to promote gender diversity and career advancement. She expressed the G8 team’s excitement to have successfully expanded to ten member countries/chambers, and that New Zealand Embassy has kindly hosted its first event in this international collaboration.

The Ambassador began by sharing policies that best promote women’s advancement in New Zeland. According to the latest Global Gender Gap Report by the World Economic Forum, New Zealand ranked top 7 globally, with “educational attainment” category ranked globally top 1. Panelists agreed that in every country, women stand on the shoulders of their predecessors. They expressed appreciation for access to education and the support of family, but also the need to remember that many women still lack these privileges. In addition to legal equality in terms of suffrage, governments around the world needed to guarantee equitable access to social services and education. China, the Ambassador remarked, does particularly well on ensuring equitable gender access to education. Overall, support for families and parental leave can be improved worldwide. Organizations also have a role to play in allowing flexibility for parents with small children to fulfill their professional passions while supporting their families. Childcare and family support can significantly enhance diversity in the workplace.

Louise then asked Ambassador Fearnley to share her extraordinary career trajectory. “A great thing about this sort of job,” the Ambassador said, “Is that we can build up a network of friends around the world – and we are forced to operate in unfamiliar environments and engage with different points of view. That energizes and motivates me.” For success in any career, she encouraged the audience to remember to focus on succeeding in the work at hand – your current role. She suggested that for most people, a clear compass setting in terms of a career direction was more useful than overly detailed or inflexible plans. She noted that there was a place for positive opportunism, working with opportunities that presented themselves, when they take you in the broad direction you want to go.

Ambassador Fearnley also emphasizes on the value of humanity. “Remain curious about people and things”, and “Read books. Don’t just follow the latest social media stories.” She emphasized that success is compatible with kindness and humanity.

The panel then turned to audience questions, beginning with how to handle residual boys-club culture that remains despite substantial progress in the working world. The panelist shared stories and advice, including the need to look for allies in those situations, among both female and male colleagues. There was discussion of adjusting communications styles to fit the audience and setting (“sometimes it helps to speak to male colleagues in a more linear way”). They also recommended encouraging participation —“if you are not intentionally included, then you can be unintentionally excluded”. Overall, finding your “place in the room” (whether in an organisation, in a meeting, at a conference etc.), the Ambassador commented, is a learned quality.

On a more personal level, the speakers shared their most vulnerable moments. One senior Embassy staff described her first experience representing her country at an international meeting. Her counterpart was surprised to see her, remarking that he had been doing this job for longer than she had been alive. She did not falter, however, resolving to do her job without letting others make her feel small. The Ambassador had faced similar adversity as a 35 year old  Consul-General in Shanghai, but talked about overcoming challenging first-encounters, to build solid professional relationships with the nay-sayers. When asked about dealing with challenging encounters, she advised to keep things in perspective, and that “the chances are that you’ve been put in the role you have because you’ve been assessed by others as being capable of doing it, so just get on with it,” she said.

Other questions raised addressed the topic of women’s confidence, especially regarding panel participation and leadership positions. To encourage more women to participate in panels, Ambassador Fearnley advised, simply invite them. She urged event coordinators to think broadly about who is qualified to contribute. Rather than pulling from the highest positions at the most famous companies, diversity of thought can make for a more interesting discussion. When it comes to taking advantage of leadership opportunities, she said, she was regularly encouraging women to put their hats in the ring. The panelists all encouraged women and men alike to accept support from colleagues and allow confidence to improve with experience. The panelists also expressed optimism that more Chinese women are entering the workforce from confidence-building childhood.

The event concluded with a powerful message on the remaining structural challenges to global women’s equality. Marielza Oliveira, Director and Representative of the UNESCO Beijing Office, shared her thoughts on broad policy changes needed, to a captivated audience. Beyond individual and business efforts, she said that governments need to implement policies such as parental leave to overcome the structural challenges facing gender equality. “When you talk about gender equality, I’m not saying anything just for women, men need opportunities too,” she said. “Who is to say that is not what they want, to be given the gift of being able to raise their children? It’s not a burden, it’s a right.” These societal expectations, she explained, are placed on women and men from childhood. “With how we raise our families, the subtle messages we give, there is no such equality,” she explained. “Women can be assertive, we can be compassionate, we can be nice, but we can be incredibly strong as well, and we should conquer the right to be the wonderful people that we are.”

Initiatives like G8 provide platforms and accesses to discuss the best practices and newest trends for promoting career women’s advancement and supporting women leaders and entrepreneurs. Register to attend the upcoming Women’s Economy Summit on April 10th, 2019 to join the conversation on the key role of women in global economic development.