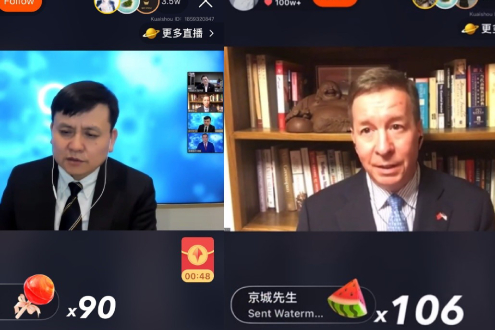 The webinar was conducted on Kuaishou, one of the world’s leading social video platforms, and hosted more than 8,630,000 users over the course of the broadcast.

To begin the webinar, Zhang first discussed the measures China has taken to effectively restrain further spread of the pandemic, including increased testing and extensive contact tracing. He then shed light on the circumstances of the outbreak in the US.

In response, Gilligan noted similarities between Wenhong Zhang and the US’s Dr. Anthony Fauci, who has been one of the lead members of the US’s Coronavirus Task Force, referring to Fauci as the “American Wenhong Zhang”. Fauci was widely seen to be one of the most trusted medical figures in the US, acting as a real-time source of expert information and driver in helping the American people realize the importance of preventative measures in the fight against the pandemic.

The group also covered topics on a potential second wave of the epidemic. Zhang put that he expected a second wave to come around November, when cooler temperatures might allow the virus to become more active and productive. Zhang believes that the prevention of a second wave depends on countries from Africa and South America that lack necessary medical resources compared to China, the US, or Europe.

When discussing why western countries and Asian countries have had different reactions towards the pandemic at the outset, Zhang mentioned it’s partly because countries like Singapore, Korea, and Japan have been through SARS and MERS, so they are naturally more vigilant and versed in preventing the spread of communicable viruses.