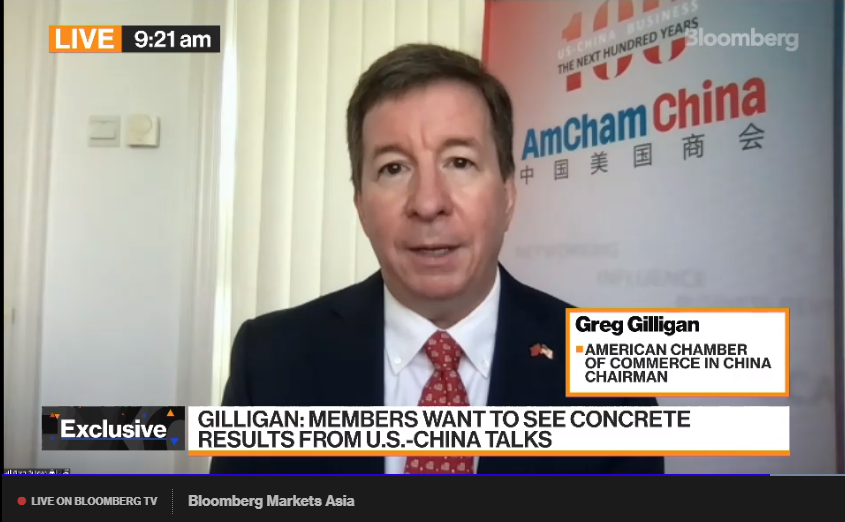 Following the release of the latest AmCham Flash Survey on Phase One, tariffs, and trade, AmCham Chairman Greg Gilligan spoke to Bloomberg TV’s David Ingles on Bloomberg Markets China Open about the results of the survey….

David Ingles, Bloomberg: Tell us about the survey. There’s quite a long wish list here. What would you say are the top three priorities?

Greg Gilligan: Sure, let me start with travel restrictions and the visa process. So, what some viewers may not know is that it’s difficult for our member company executives to get back to China in the past which has improved over the last week. There was a step that was necessary beyond having a visa, so having a visa didn’t get you back here. Now that step is no longer necessary. So that’s a good thing. However, visas are still difficult to obtain or renew. And there’s a very acute problem because visa holders, even with a valid visa, can’t bring their spouses or dependents. And there’s not a lot of workers that are willing to spend extended periods of time away from families. So, we need to solve that to get people back on the ground so they can drive businesses and make investment decisions.

Bloomberg: What are your conversations right now with the powers that be in Beijing around this specific issue? Is there any early indication that we might see this improve anytime soon?

Greg Gilligan: Yes, we’ve had favorable reactions from several high-level officials in ministries we talk to regularly. And while we don’t think that we can get the actual policy changed, we may be able to work within some framework of exceptions and bring our people back.

Bloomberg: Now I want to bring up the other thing: tariffs. It’s easy to forget given the pandemic and the regulatory environment that’s dominated right now that there are these tariffs still in place and still affecting you and your counterparts there. So, what’s the ask?

Greg Gilligan: Well, almost half of our respondents directly asked that tariffs be removed. 78 percent of respondents indicated that tariffs are having a negative impact on their business. And if we compare that result to a survey we did at the end of last year, that’s up another 11 points. So, tariffs aren’t helping business. People want to see them go away. 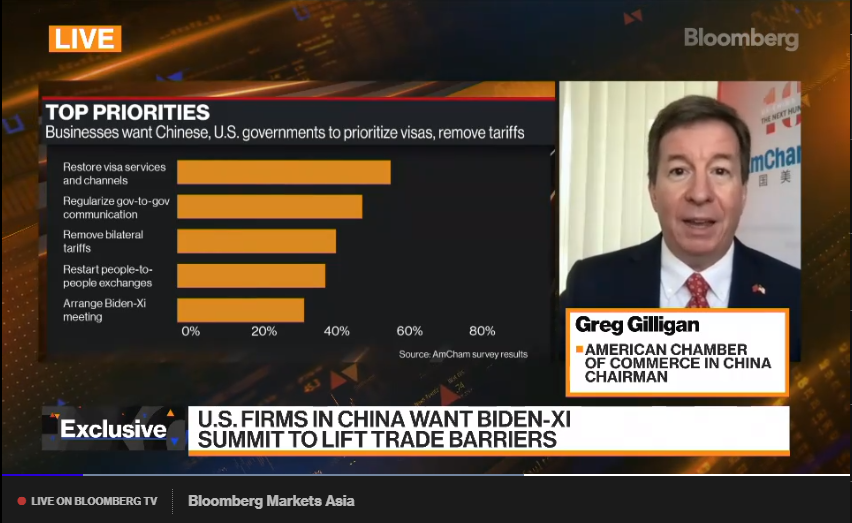 Bloomberg: One of the things that actually made it off the list is a hope that we might get a meeting between the two presidents: President Xi Jinping and President Biden. If that happens, I would imagine that in a lot of ways it makes most of the other things go away. Is that an accurate description or perhaps the underlying hope?

Greg Gilligan: Well, I love your optimism, David, but I don’t know if that’s what it means. What’s happened over the last several years, first with the trade negotiations and then with Covid, there’s just grown a gap between the two countries and the relevant officials and how much they communicate, which right now is not a lot at all. So, we’re really hoping that more regular communication can start to happen and resume some sense of normalcy. And certainly if it has to be or can be top down – meaning the two countries’ leaders get together and kick start that process to get it going again – that would be a good thing. So, we’re all hoping for that. And then of course the working level folks need to talk frequently.

Bloomberg: Understood. Now I just want to pivot away from what we’ve covered already. I’m wondering how the regulatory and regulation story is playing out across your members there? Because we talk about them usually in the context of the Chinese companies, and wondering what the conversations are when it comes to American firms in China? Are you guys worried? What’s happening? What’s the general tone?

Greg Gilligan: Well, business craves predictability and stability, so we see a lot of movements in the marketplace and particularly at the macroeconomic level as it comes to restructuring all the regulation, and so it’s created some uncertainty. Now I will say that the various ministries that we engage with have been very proactive in reaching out to us and saying, “Hey, what questions or concerns do you have?” So, we’re doing an awful lot to communicate around those things. But there’s an awful lot that we need clarity for so that people can make investment decisions. I would say there’s kind of a “go-slow” approach right now to see how things shake out.

Bloomberg: And Greg finally talking to you gives us a very good pulse of what’s happening in terms of what’s happening on the ground. Things like final demand. So, I guess a two-part question here: People are trying to figure out whether the Chinese consumer is back. So, what are your members telling you about consumption, and whether or not we have returned to pre-pandemic levels? Then on the issue of logistics and supply chains and these bottlenecks are you guys concerned? What are you guys doing as far as that is concerned?

Greg Gilligan: Well, on the consumer side I think we see a bit of a difference in certain markets. So, if you look at places like Beijing, Shanghai, Guangdong, Shenzhen, consumer activity is still pretty strong. And in other places less so. So that’s one thing as to supply chain and logistics. Things are still operating pretty well, mostly because China does so well at controlling spread domestically of the virus. And so there’s great support for the supply chain. Having said that, however, when you consider things like tariffs or other things, there’s an impact to costs or impact to demand and such, so that eventually reaches the factory floor as well.