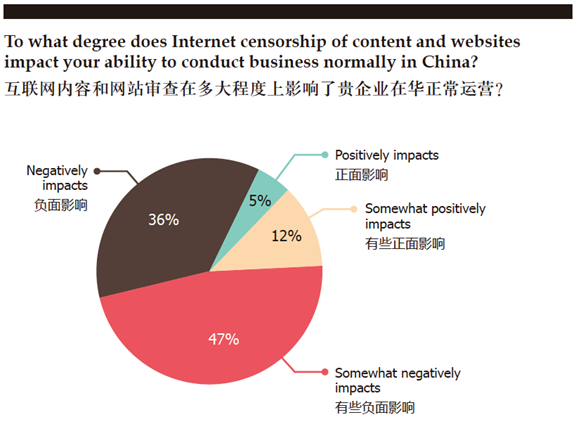 China’s filtering and blocking of Internet services (Google, DropBox and many more) is having a substantial impact on many AmCham China members' operations in China, from transactions to email communications. While ideological reasons remain the driving force behind much of the Internet censorship in China, many websites hosted overseas are rendered unusable by slow download times caused by the Great Firewall’s filtering process. Businesses are being affected both by the lack of transparency regarding censorship policies and a lack of formal channels to seek information regarding blocked services.

While it may be necessary for businesses to circumvent the Great Firewall, the subject still seems taboo. As many large corporations will have their own VPN networks to their offices outside of China or elsewhere, smaller companies, startups and personal users rely on VPN providers in order to access restricted services such as banking, email and social media. For these users, the Great Firewall poses more of a problem. As no foreign-owned VPN providers are registered in China, their operation and sale of goods in China is illegal, and their servers are often attacked by Chinese censors. Recently, the scope of filtering and blocking techniques has escalated, rendering a much larger set of commercial products and services unavailable, resulting in the targeted attacking and shutdown of foreign VPN providers Astrill, Golden Frog and StrongVPN’s servers.

Article 7 of the Telecommunications Regulations passed by the State Council in 2000 states that those operating "telecommunications businesses," which would include VPN services, need a license is to operate. There is no law, however, against using VPN software.

In the AmCham China 2015 Business Climate Survey, 83 percent of businesses surveyed felt that the Great Firewall in some way negatively impacted their business. One example is that due to its screening and filtering process, the average non-Chinese website download time is 16 seconds (see more on this Slideshare infographic). In 2009, AmCham China member company Akamai released findings for a commissioned study that 47 percent of consumers expect a website to load in two seconds or less, and 40 percent of consumers abandon it at the three-second mark, indicating the importance of site load speed time to purchases made and site loyalty.

In order to overcome these problems, most large businesses in China will have at least one of their own VPN servers in one of their foreign offices or hosted at a different location. This allows for encrypted traffic to flow through the foreign location and bypass the firewall. According to an official at the US embassy, as long as the traffic is not suspected as downloading harmful content, there should be no issue. As long as the company is doing this for internal business and doesn't sell its VPN services to users in China without a license, the telecommunications act is not breached. Companies looking to start up their own VPN connection should consult a tech specialist. For those confident with networking, AmCham China member company Cisco provides an in-depth guide for setting up your own VPN connection.

Setting up a VPN for the personal user

VPN software nowadays is incredibly easy to use. Free VPN software is likely to be restricted to short time usage or a trial period; paid VPN software costs roughly $8 per month, and prices fall with year or half-year purchases.

When using a VPN, the Internet connection becomes encrypted and secure. This keeps traffic data private and safe from government censorship or hackers, reducing the risk of using public Wi-Fi networks (such as in coffee shops).

To read more about how VPNs work, check out this story from LifeHack.

Which VPN provider do you use?