You are here:
CommentaryMember Focus 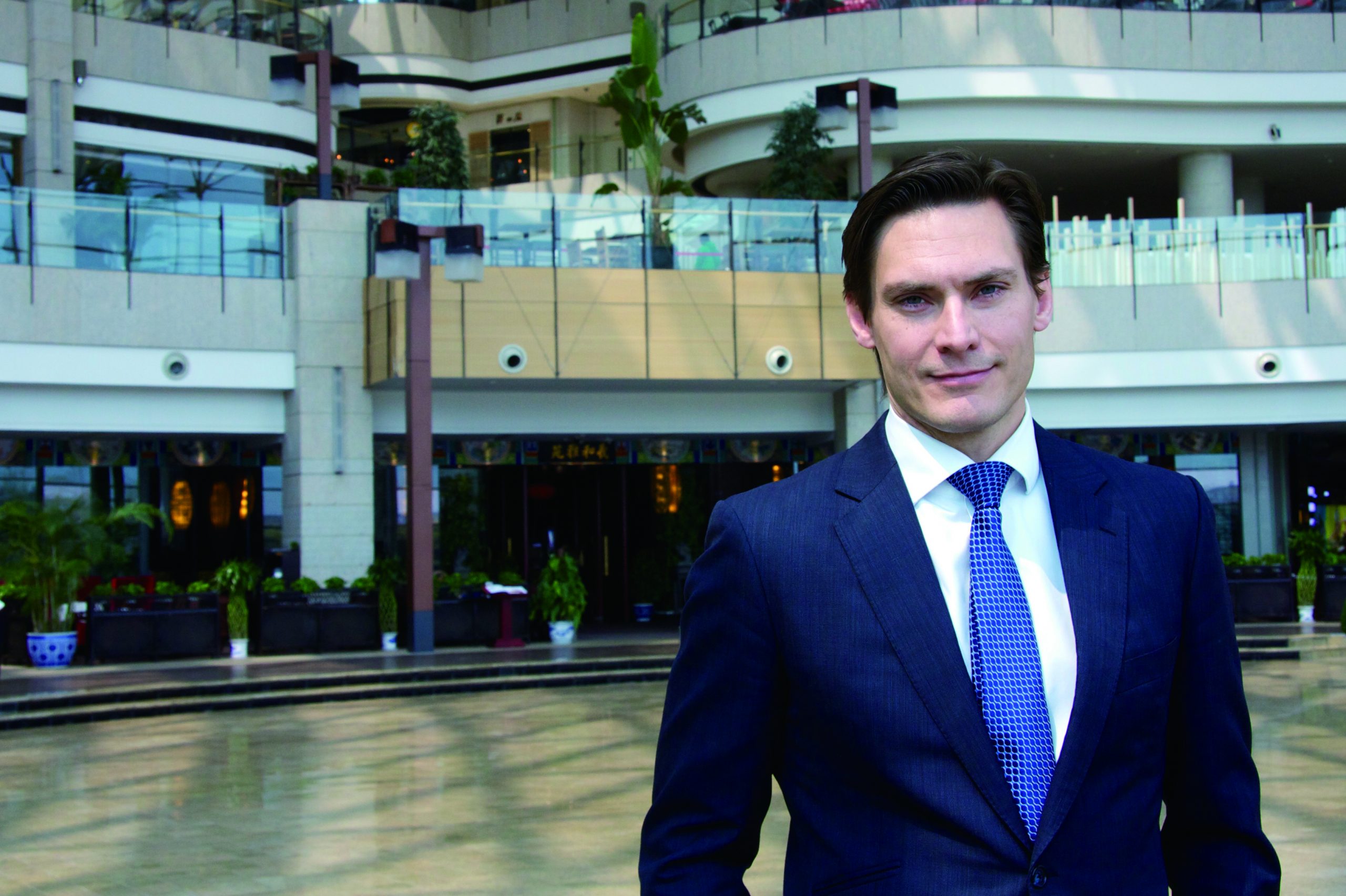 Article and photo by Bridget Riley

It's tempting to say that the INDIGO project in Northeast Beijing is nearly complete. The 176,000-square-meter, mixed-use development started opening in 2011, first with the office and mall, followed by the East hotel and now the subway component, linking the spot along Jiuxianqiao Lu to the rest of the capital. But the way General Manager Kieran Bowers of Swire Properties describes it, the project will always be a work in progress. The fine tuning won't, and shouldn't, ever stop.

The Swire name includes airline Cathay Pacific and bottling company Swire Coca Cola, and its Chinese name – Taikoo – can be seen on projects as big as Taikoo Li Sanlitun in Beijing and as ubiquitous as the Taikoo sugar packets. Bowers joined Swire right out of Oxford and has now been with the company for 17 years. His career started in Hong Kong and has taken him across the world, from Saudi Arabia to Sri Lanka. Bowers initially worked in Cathay Pacific, and he moved into Swire Properties seven years ago. He took the helm of INDIGO in June 2012, right as the project was shifting from construction to operations.

The mall's Winter Garden will once again serve as the backdrop to the American Ball this year, taking place on May 23, with an afterparty at the chic East hotel nextdoor. Bowers caught up with Business Now to discuss how he first joined the company and why approachability is a key component of his management style.

A: We are currently finalizing the whole project, and there’s still the landscaping work we have to do at the front. Each project that we have uses design to try and differentiate itself. That really is the challenge in China – making it interesting and making it relevant amongst the huge amount of new malls coming on stream. I love investing time in that.

We’ll also have a showroom here for Volkswagen opening in October, which will be a beautifully designed building by a German architect. Finally, then, the first part of the development is complete, and after that, we keep reinvesting in the product. When you are in the operational stage, it is really just about fine tuning, fine crafting it. Shareholders never get to close their checkbooks unfortunately.

Q: You've been with Swire your entire career. Why did you first join the company?

A: I studied Japanese history and language at Oxford. Traditionally so many people from Oxford tend to go into banking, management consultancy, accounting, those sort of core business areas. I had a very clear idea of what I didn’t want to do, which is those areas, but not a great idea of what I did want to do. Swire offered me the choice of having a varied career, Asia-focused and with a lot of different businesses that I could try. It’s a great company, really quite attuned to how I operate in the workplace with certain principles that it sticks to.

Q: Could you elaborate on those principles?

A: Swire really has a good track record of treating people quite fairly. The family still has a strong engagement with the business and Swire Pacific, which is the investment arm of the family based in Hong Kong. There is a lot of exposure to the senior management. They are always enquiring about how you are doing on a business level and how you are doing on a personal level.

From a business context, the company seeks operational excellence. It always tries to minimize the impact of its businesses either on the communities it works with or in the environment, and it has a very strong record of investing large sums of money into minimizing environmental waste, damage. We’re probably a pleasure to work with and also a nuisance to work with. The design process is very iterative, we’re very demanding of architects and designers.

Q: Human resources (HR) is a major challenge for many AmCham China member companies. Could you speak about the HR issues you’ve been facing?

A: Recruiting and retaining talent is always important. What we try to do is engage the staff a lot more. We once a month hold a lunch with the frontline teams and the management. Pizza around a work desk, usually around 15 of us engaging with them, just a more informal way to get feedback from them. It's really about breaking down those hierarchies that you find and that sometimes have to exist in a workplace.

Q: Besides HR, what other issues are keeping you up at night?

A: Loyalty to brands is getting shorter and shorter. Traditionally in the real estate world, you spend some time selecting a brand, which could take anywhere between 12 to 16 months to work out a commercial relationship, and you then engage them in a lease term that could be anywhere between four to eight years.

But in that time in China, things can fall out of fashion quite quickly, so it's really how you get one step ahead to make sure you’re still relevant, and putting that right mix together that really excites the consumer and keeps them coming back.

Q: How do you communicate across this team?

A: That is always a constant challenge. My Chinese is not very good, so whenever I do communicate, I have to have someone facilitating it. I try and have as many face-to-face meetings as possible. With my core management team, I meet with them individually once a week to go through issues.

I spend as much time around the mall and in the office as possible just making general chitchat with the frontline staff, because they are the majority of [the staff]. I also come here on the weekends, just to see what happens when things are a lot busier and support structures are not there because the office teams are away.

Q: What kind of boss do you hope to be?

A: Genuine is a key criteria. Not pretending to be or aspiring to be anyone else, having your own style.

The other one is approachable, which makes some of the reporting culture a lot easier. [Then] people feel much more at ease with coming to tell you about [bad news] rather than bottling it up or hiding it.

Q: Any books that have inspired your management style?

A: The last book I read that was very instructive on leadership is called The Last Place on Earth by Roland Huntford. It’s about the race to the South Pole between (Britain's Robert) Scott and (Norway's Roald) Amundsen. It’s a historical assessment of how each of those people approached it and how they managed the teams under incredible adversity. Those guys were constantly facing setbacks, and they went back and recalibrated, or in some cases didn’t – they just didn’t accept that things weren’t working. All businesses will have that sort of headwind where it is very difficult to change. It’s really understanding what you can change, and then swiftly maneuvering to reinvent yourself or readapt.

Q: What do you do outside the office, and how do you keep a work/life balance?

A: Well I have three young kids, the eldest is 5 ,youngest is 1, so I don’t have a lot of free time. Really just downtime with them, playing, being silly, taking them out. Other than that, it’s reading. That to me is how I decompress – just pick up a book. I tended to read mostly historical works and biographies, but now I tend to slip more into fiction.

Once a week I commit to leaving the office at 5:30, so at least I’m there to do bath time and put them all to bed. I get as much work as I can done Monday to Friday, even if it involves late nights, so that at least the weekends are then free and I can be present both physically and mentally.

Q: Do you also encourage this balance among your staff?

A: Yeah, I do. Come 6:30, 7 o’clock, I’ll just wander round, see who's here and tell them to go home. I think people overrate how productive you can be in those final hours.

Q: What is the best advice you’ve ever been given?

A: Probably from my mother: Smile more and frown a lot less. I think that it is always key to keep a sense of humor. You can get sort of overwhelmed by either the business or demands of different people, but try to at least keep a bit of a sense of humor about it.

How Employers Should Approach the COVID-19 Vaccination
May 21, 2021