Language Barriers into Gateways of Connection 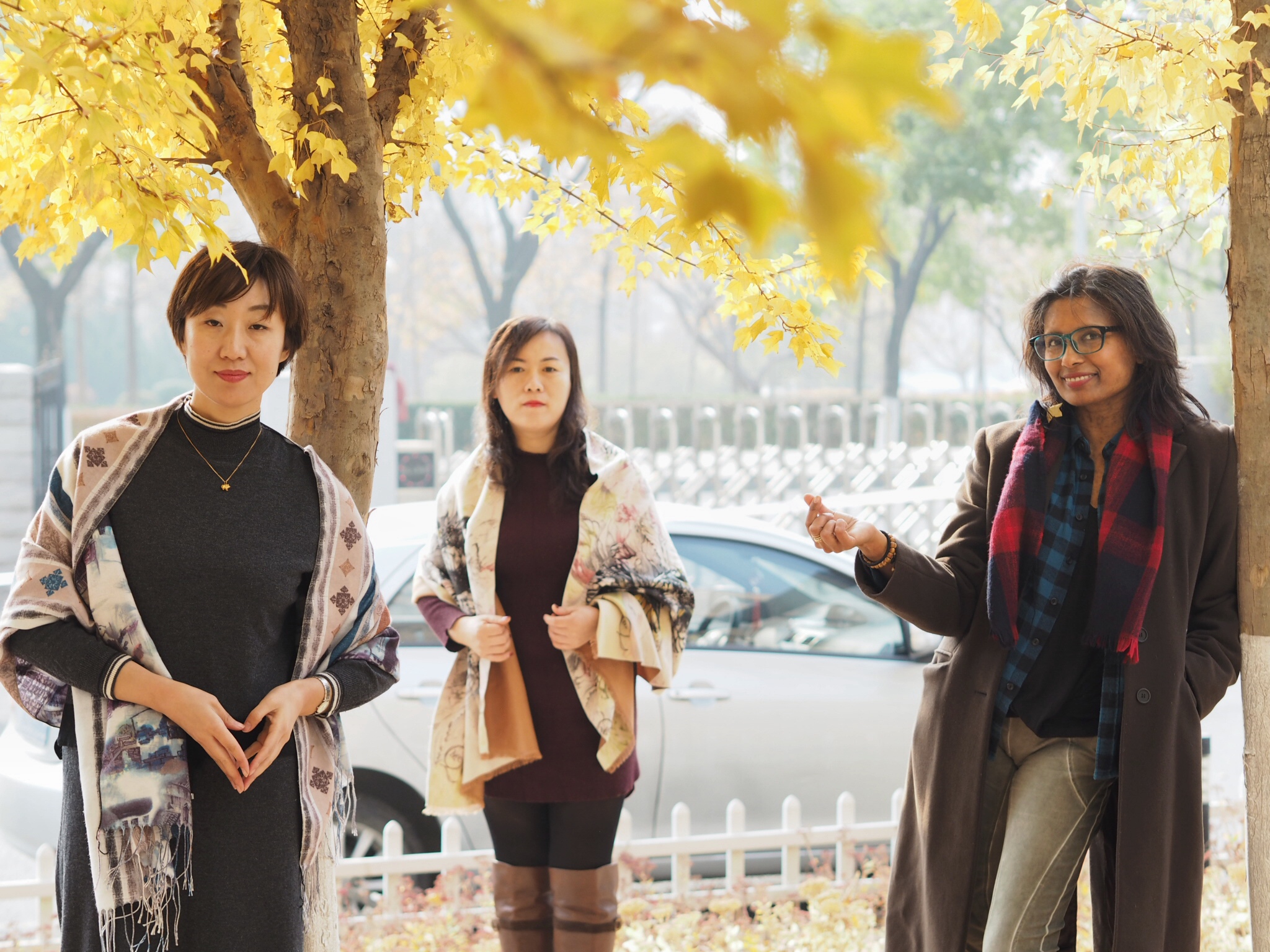 AmCham China NE member Rochelle Mathias has a vision. The Founder of Mother’s English, a Dalian volunteer group serving as linguistic role models for Chinese primary students, sees a day when the language barriers that keep students from succeeding in an increasingly global community are turned into gateways of academic and career success. Mother’s English drives on the principle that globalization necessitates a common shared language and that all students, regardless of socio-economic status, should have access to the educational supports necessary to become fluent in English.

In 2001, China mandated English learning beginning in Grade 3. Many schools, particularly in urban areas, begin English instruction in Grade 1. Some rural areas are still working to implement the mandate. Currently, English as a second language is a key educational strategy around the world. Increasingly, many countries are recognizing that business, higher education, science, international transportation, and a host of other sectors all rely on fluent English speakers.

As anyone who has studied another language knows, the greatest mastery challenge is the linguistics – hearing and speaking.  Here’s where Mother’s English steps in. Mother’s English is a sustainable educational model that does not rely only on native English speakers’ involvement and can be carried forward even when the English speaking volunteer is not there.  “We work closely with primary classroom Chinese English teachers around Chinese English curriculum to enhance the learning experience and students’ English test scores,” said Rochelle.

“There’s more to English language proficiency then just reading and writing,” said Rochelle. “So our volunteers offer engaging and interactive English workshops to increase a student’s conversational English.” Rochelle believes it’s important that students hear a variety of English accents, so her volunteers are both native and non-native speakers. “We don’t do what the Chinese schools already do well – which is reading and writing. We focus on listening and speaking which really translates into ‘hearing’ and ‘pronouncing,’” said Rochelle.

When Rochelle and her family moved to Dalian in August 2014 for her husband’s flooring business, they decided not to buy a car or hire a driver. Rather, they immersed themselves into the flow of everyday Dalian life by taking public transportation and using Didi Chuxing. “I’m a Didi girl,” says Rochelle. “I love the adventure of hopping into a stranger’s car in China. Honestly, I’ve gained so much insight into the Chinese culture from non-English speaking taxi drivers.”

Curious taxi drivers are always asking Rochelle where she’s from and what she’s doing in Dalian. During one Didi rideshare downtown, Rochelle couldn’t understand why the taxi driver became so excited after she responded. Quietly, the other passenger in the car leaned over and gave Rochelle his phone. A picture of Canadian physician Norman Bethune stared back at her. That night Rochelle went home and looked up Dr. Bethune. He was known for bringing modern medicine to rural China during the Second Sino-Japanese war. His mobile blood transfusion invention saved countless Chinese lives.

“I had to go all the way to China to learn about Dr. Bethune,” said Rochelle. “His dedication to internationalism and service to others was inspiring.

Rochelle has spent a life turning barriers into gateways. A Pakistani-born Indian, Rochelle’s family was forced to leave Pakistan when she was nine years-old. Her father abandoned his business due to escalating political tensions and immigrated to Toronto, Canada. Her family arrived during the height of the “Paki crisis” in the mid-1970s. “I was thankful that English is my first language because it helped me integrate more quickly,” said Rochelle.

In 1991 Rochelle slipped into a coma. She needed surgery to remove a brain cyst. Life changed dramatically.  For years, she suffered from migraines and struggled with her commerce studies at York University. She had persevered through the migraines by attending university part time while helping to run her father’s failing product business. After surgery, plans to finish her studies were over. Her memory had been affected and she struggled silently with depression. She convalesced by throwing herself into turning around her father’s failing business.

“Looking back it was actually pretty comical,” laughs Rochelle. “I was a bald woman with staples in my head meeting with suppliers to renegotiate contracts. I didn’t know it at the time, but the scarf I was using to hide my scar wasn’t doing a good job of concealing. I got a lot of strange looks in those days.”

She kept pushing forward. In the course of three years, she increased revenue from $500,000 to $10 million. She was 30 years-old when she decided to start her first of several e-commerce businesses. She launched one of the first online office product businesses which she later sold to the Pinault Primtemp Redoute, the luxury goods conglomerate now known as Kerring.

A Seed is Planted

Rochelle was seeking ways to connect and give back to the Dalian local community. Frustrated by lack of opportunities and limited by her own inability to speak fluent Chinese, she was asked to help create a “western-style” education workshop for Children’s Day 2015 at Tongligong community center in Dalian, KFQ. Play stations were set up around the room and children were guided through “play-to-learn” experiences like puzzle solving and dramatic play. “I looked around the room and saw how much fun these children were having while learning.” That afternoon the seed for Mother’s English was planted.

The community center liked the workshop and asked her to develop and teach a “life skills” class which quickly morphed into a western-style English kindergarten class. Around the same time, Rochelle had made a connection to IKEA Dalian management to procure a donation of classroom materials for a rural village school where she volunteered. The school wound up moving and didn’t need the materials, but a connection was formed and IKEA asked Rochelle to lead a weekend English club for the children of their migrant workers through their IKEA ICare China corporate social responsibility program. She recruited and trained high school students from the Dalian American International School (DAIS) to help lead the English club. The high school students gained valuable professional and volunteer experience which fit school’s mission of preparing global citizens.

“I am always struck by Rochelle’s innovation and determination,” said Lisa Liang, DAIS CEO. “As a foreigner to Dalian, she quickly adapted to the culture and embraced its people. When she first brought the idea of Mother’s English to me, I was impressed by her positive energy and her willingness to give back to a community in which she has no personal connection to. Her enthusiasm is contagious, igniting a fire within the student volunteers. They are very committed.”

Rochelle incorporated the “play-to-learn” model into the IKEA weekend clubs and Tongligong English kindergarten classes. The beach ball became the Mother’s English logo. “The beach ball represents play and fun and helps me focus a students’ attention and directly engage them,” said Rochelle. “It also gets the blood circulating which is good for cognitive learning.” The weekend club was a success and soon Gong Ren Cun, the public school serving the IKEA students, asked Mother’s English to provide English conversational opportunities during school hours.

Mother’s English philosophy is based on a learning model that builds on student interaction. The overriding goal is for children to feel enthusiastic about learning, to be interested, curious, and happy as they learn to speak English, and to be deeply involved in new learning experiences. “We believe that children learn through hands-on experience and excel when they are actively engaged in learning environment,” said Meagan Michalk, DAIS high student volunteer.

The public and private requests for the Mother’s English program keep growing.  The challenge is balancing high-quality volunteer recruitment and training with the growing community response. For Rochelle, that means doing what she does best – networking.

“The first thing you notice about Rochelle is her energy,” said Chris Smith, Former NE Amcham Dalian Chairman. “Her ‘switch’ is always on. There are very few people Rochelle hasn’t shared a conversation with in Dalian. It’s safe to say, if you haven’t met Rochelle, you will soon.”

Rochelle seeks out connection and believes every chance encounter is valuable. “I’ve always believed that success comes from an openness to just figure it out,” said Rochelle. For Rochelle, that means being socially active.

Rochelle is a member of Dalian KFQ Rotary Club, an international service organization with the motto “Service above Self.” She sees the challenges many Rotary clubs face in developing sustainable service projects overseas. She believes someday the Mother’s English program can be used worldwide by Rotary clubs as a turnkey service project.

“I really enjoy working with Rochelle,” said Alex McConnell, Rotary Club Dalian KFQ Past President.  “She brings a unique perspective to our projects and consistently ‘ups’ an idea by transforming it into action.”

Rochelle has no intention of slowing down. Her passion is fueled by the belief that English as a second language is about connection. “China is not unlike any other part of the world in regard to lack of exposure to other principles and ways of thinking,” said Rochelle. “Without being able to read, write, and converse in English, China cannot influence or be influenced by the world. English creates the gateways to share ideas and systems. These connections help us share a better world.”