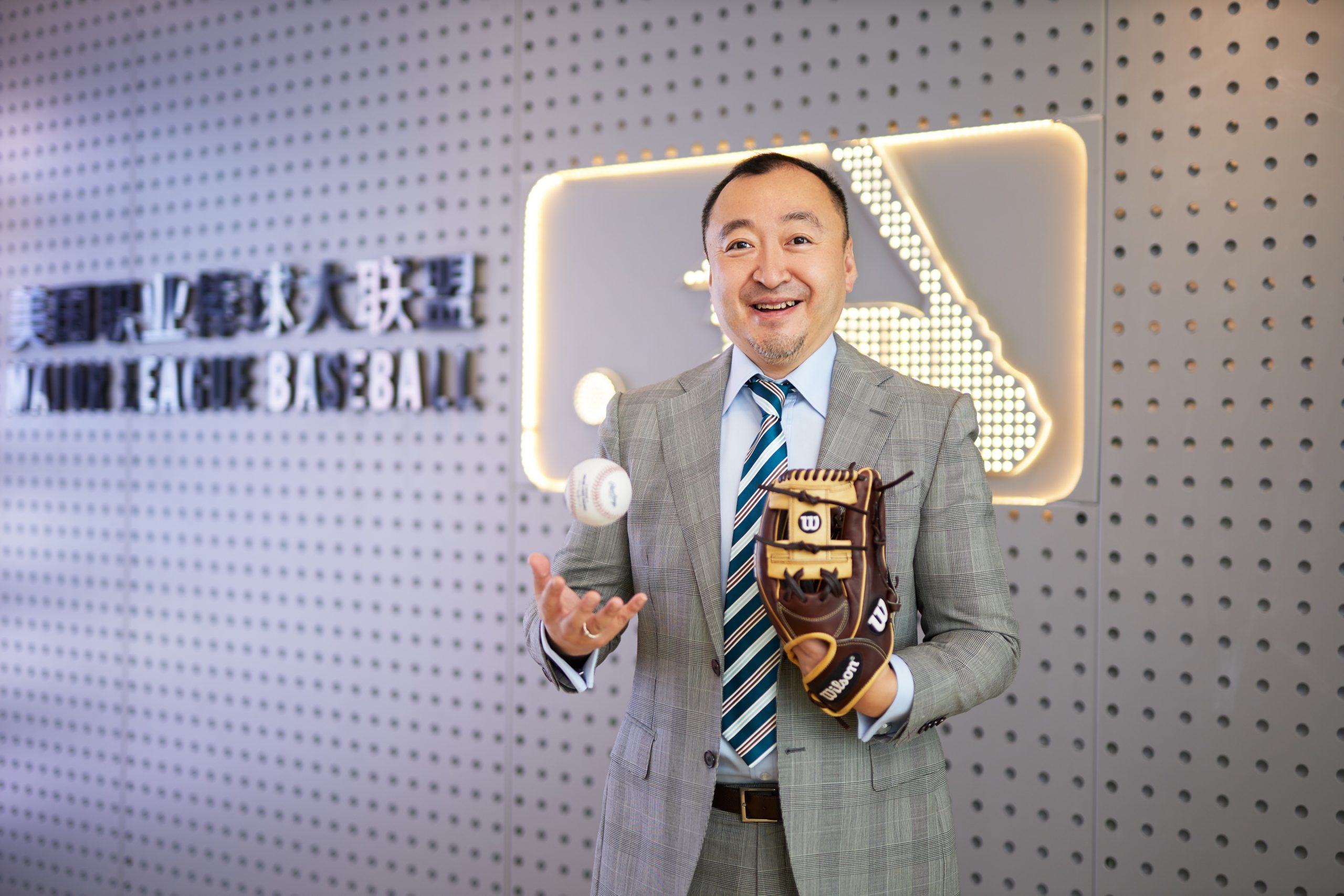 Major League Baseball (MLB) first entered China in 2007. Since then, the league has been working steadily to popularize America’s pastime in China. The AmCham China Quarterly talked to MLB China’s Managing Director Tony Qi about how the combination of grassroots growth, localized digital content, and live streaming are setting the league up for a grand slam.

MLB partnered with Chinese Baseball Association to launch “MLB First Pitch” in schools and established a complete baseball eco-system for students, greatly enhancing the popularity and awareness of baseball in mainland China. Over the past two years, MLB has been actively making its appearance in the film festivals, e-Sports tournaments, and major sports industry summits and conferences, marking MLB’s brand marketing achievements of diverse partnerships and innovations in mainland China.

As the former SVP of Asia Pacific at Fox Networks Group, Tony facilitated and led the cooperation of content, projects, and distribution strategy with dozens of partners, including CCTV, Tencent, China Intercontinental Communication Center, SMG, and Alibaba, which efficiently increased the awareness of Fox and National Geographic in the Chinese market.

Before joining Fox, Tony was vice-president of the Strategy, Business Development and Investment division at Publicitas’ APAC/China office, who has partnerships with dozens of worldwide media partners, including CNN, ABC, Google, Facebook and USA Today.

While MLB has only had an established China presence for less than 15 years, the growth of baseball’s popularity has been remarkable. Currently, the league has established training camps nationwide, counts 41 million Chinese fans as part of their baseball population, and inked partnerships with two of China’s largest streaming giants. Since joining MLB China  as Managing Director in 2019, Tony Qi, has led MLB through the COVID-19 pandemic that interfered with the very DNA of baseball – actual games. Qi has instead pivoted the league’s strategy to focus on innovative new directions, helping MLB not only adapt, but flourish through these extraordinary times.

MLB has long recognized the size of the market potential in China. Qi explains, “There is huge potential, but the baseball community in China is relatively small compared to other international markets.” But size of the market aside, Qi also identifies another reason: “Baseball used to be big in China, back in the 1950’s and 60’s. There’s a strong history of the game in China. That’s why we believe that with our influence, and together with local baseball associations and governments, we can drive participation.” After establishing their China offices in 2007, the league did not waste any time, Qi says “That’s when we rolled out what we called at the time, Play Ball, now we call it MLB CUP.” Qi compares this first MLB tournament with today’s, “In 2008 there were five participating cities and just one age group per city. Now, 14 years later, we’re in 20 cities across China and each city has up to five age groups participating.”

Another central development Qi cites is the creation of MLB’s Development Centers to nurture China’s next generation of elite baseball players. Like the MLB CUP, the expansion of the Development Centers in China has been swift. The first was opened in 2009 in Wuxi. Qi recalls that they recruited 16 players from across China, all around the age of 12. By 2014 they had established two more Development Centers in Changzhou and Nanjing. But, Qi clarifies, the Development Centers are aimed to develop recruits both on and off the field, “Wuxi is a junior high school. The kids get to practice with our MLB coaches, but they also get to go to school like normal students. When they graduate, half go on to Changzhou, and half to Nanjing. These two are our senior high schools.” Of the 114 graduates from the program so far, 34 have gone on to play for the China National Team. Another 83 have earned baseball scholarships to colleges, with around 70 of those scholarships to Chinese universities and 20 to US schools. Most impressively, seven of these graduates have signed with MLB clubs, who have been training them through the minor leagues. Qi is proud of the progress made so far, saying, “This really meets our goal of training elite Chinese players.”

With proven success in early education, MLB debuted its First Pitch program last year. The program, targeting elementary school students, has already been established in 12 Chinese cities. Unlike the elite level training at the MLB Development Centers, the First Pitch program aims to introduce children to baseball in their regular Physical Education classes. Qi explains, “It’s just for one class, we come in and design a fun baseball game. We expose the kids to everything that’s involved in baseball – throwing, batting, running bases. It’s not meant to teach them how to play baseball, rather we want to arouse their interest for the future.”

Qi says MLB China’s mission is to promote baseball sports and culture through participation and engagement of all forms. However, he is well aware of the challenges, and one of the largest is a lack of awareness. He says frankly, “In China baseball is not as popular as soccer, basketball, volleyball, not even ping pong.” Because of this inherent disadvantage, MLB has focused on building grassroots growth and finding creative ways to educate the market. “The challenge is how to arouse interest, and it’s not only through offline activities. We know we have to go online if we want to successfully educate the Chinese market.”

The second challenge Qi notes is the scarcity of actual stadiums. China has very few baseball fields, and, “Without a proper baseball field, it’s difficult to drive longevity of the sport.” He says. MLB China has been working to partner with local government and enterprise to build stadiums and the supporting infrastructure. The third challenge Qi identifies is a shortage of local talent. He says, “There are not enough local coaches. We have been developing our trainings in China over the years, but there are still not enough coaches.” To address this problem, MLB is collaborating with local communities, universities and baseball associations to create classes for coaches. One example of this effort was a recent event with the Guangzhou Baseball Association that had at least 60 registrants.

Since the outbreak of the pandemic in 2020, MLB has increasingly shifted their concentration to online channels. In particular, MLB has focused on producing original video content for the local market. “We want to tell relevant Chinese baseball stories that will resonate with local fans,” Qi says, “we began with an animated series called Baseball 101 and Baseball 102. Both were fun, easy, two-minute clips to explain to people in simple terms about the complicated rules of baseball.” The clips, released last year, now have over 30 million views. Qi recognizes this success, “That’s a great achievement for a sports instructional video!”

In fact, MLB has been producing a wide and varied catalogue of video content for its Chinese fans. Topics range from behind-the-scenes short-form videos detailing the lives of MLB superstars, a series introducing “ballpark foods”, to a short series on MLB’s influence in fashion stemming from the popularity of MLB team logos in streetwear designs. The strategy is proving successful, Qi says, noting that “In the last year and in the first half of this year, we have reached over 200 million views on the content we delivered. We will continue doing that. I came from the Fox Networks, so I really understand the power of communication and good content.” Qi hopes that this content will continue to drive engagement and interest from their audiences and increase social media engagement. Qi adds that these social media campaigns do not exclusively target baseball fans, “Like I said, baseball is a small community, but we are trying to unite different sports fans to promote sports though baseball’s angle. That’s how we’re working to broaden our scale.”

US Sports in China

MLB China is not alone in seeking out opportunity in China. The National Football League (NFL) and National Hockey League (NHL) have both been looking to bolster their China presence over recent years. The question is, are other US sports entering the local market seen as allies or competitors? Qi says the more the merrier: “I’m a big sports fan. I think the more sports coming to China from the US or Europe are good for the local fans.” He explains, “My understanding of sports fans in China and the US is that they are slightly different. In the US, there is a lot of passion behind watching the local team, supporting that one team. In China, there is still so much passion, but it’s more about sports in general, whether that be about soccer or the local basketball team.” Qi believes that the more sports, the more passion, the better for the sports industry as a whole saying, “Eventually, when the pie grows big enough, everybody will benefit from it.”

“The challenge is how to arouse interest, and it’s not only through offline activities. We know we have to go online if we want to successfully educate the Chinese market.”

The MLB’s 2019 Chinese Baseball Population White Paper estimated that China’s baseball population surpassed 41 million. However, Qi focuses on the more relevant number – the active baseball population – which currently stands at 21 million: “Out of that 21 million, I believe 63% of those individuals became active fans within the past three years.” That active baseball population includes baseball consumers, regular game watchers, and those who have actually played the game. He points to this massive growth as a positive indicator of the rapid development of baseball in China, and he adds, “Those numbers aren’t factoring in the kids playing the game and the tremendous growth of youth clubs over the past few years. Not even the pandemic could stop the growth of baseball in China.”

With most MLB games played in the US, MLB China has partnered with Chinese TV and streaming giants to broaden their reach. MLB has worked closely with Tencent to increase streaming. Qi says, “Not only through marketing activities, but also through celebrity guests sharing their baseball stories.” While the pandemic has had a marked impact on these activities, like shortening the regular season in 2020, he is prepared to work with their partners to develop the right content to increase streaming, “My hope is that one day you’ll see people on the subway holding their phone and watching one of our games.”

In addition to Tencent, last year, MLB added BesTV, which is part of Oriental Pearl Group, as their IPTV partner. While they have had success with live streaming, MLB is still looking to expand their partner portfolio. Qi says, “BesTV is the leading IPTV platform in China. We wanted to add an extra platform for fans. Hopefully, we will also have a satellite TV partner to broadcast live streaming as well. We want to be across as many channels as possible.”

Olympic sports in China not only receive more attention and widespread popularity, but also more central and local government funding. Qi says, “It’s been key for baseball to be in the Olympics to drive more attention from the government and media.” With many of the highest-ranking baseball teams being Asian, Qi thinks the time is right for China to focus on developing their team. Ahead of the 2028 Los Angeles Summer Olympic Games, MLB is using the time strategically, working with local authorities to prepare. Qi predicts, “With eight years, and if China really stays focused on baseball, absolutely there is place for them on that podium.”

This article is from the AmCham China Quarterly Magazine (Issue 1, 2022). To access the entire publication for free, sign up on our member portal here.