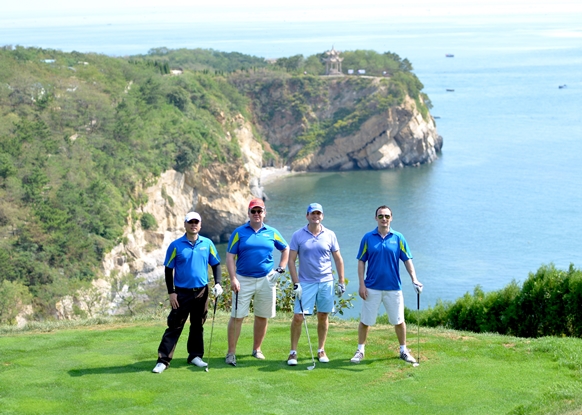 AmCham China's Northeast China Chapter brought together 48 golfers for a day on the links and an evening raising money for a good cause. The 6th annual Northeast China Charity Golf Tournament took place on Sept. 19 at the beachside course of Dalian Golden Pebble Beach Golf Club, located in the Jinshitan National Resort Community.

Northeast China Chapter Executive Board Member Jon Foley delivered a few opening remarks before the players set out on the 18-hole course, sandwiched by green mountains and blue ocean. The tournament maintained a two-person, best ball format, where the top score on the team for each hole stands for the team score.

The big winners of the day were Foley of Intel China and Michael Felker of the Dalian International School with a first-place score of 77. The runners up were Rabiab Labnongsang of Star Marine and Steven Schlesselman of Lee San International Group.

The event benefited Wang Da Jie Nursing Home for the Elderly, and the head of the charity, Wang Yining, attended the awards dinner (catered by Café Copenhagen) to share the organization's mission and to describe the difficulties it's currently facing. Raffle tickets purchased throughout the night totaled RMB 17,500, all of which went to Wang's charity.

Closest to the pin