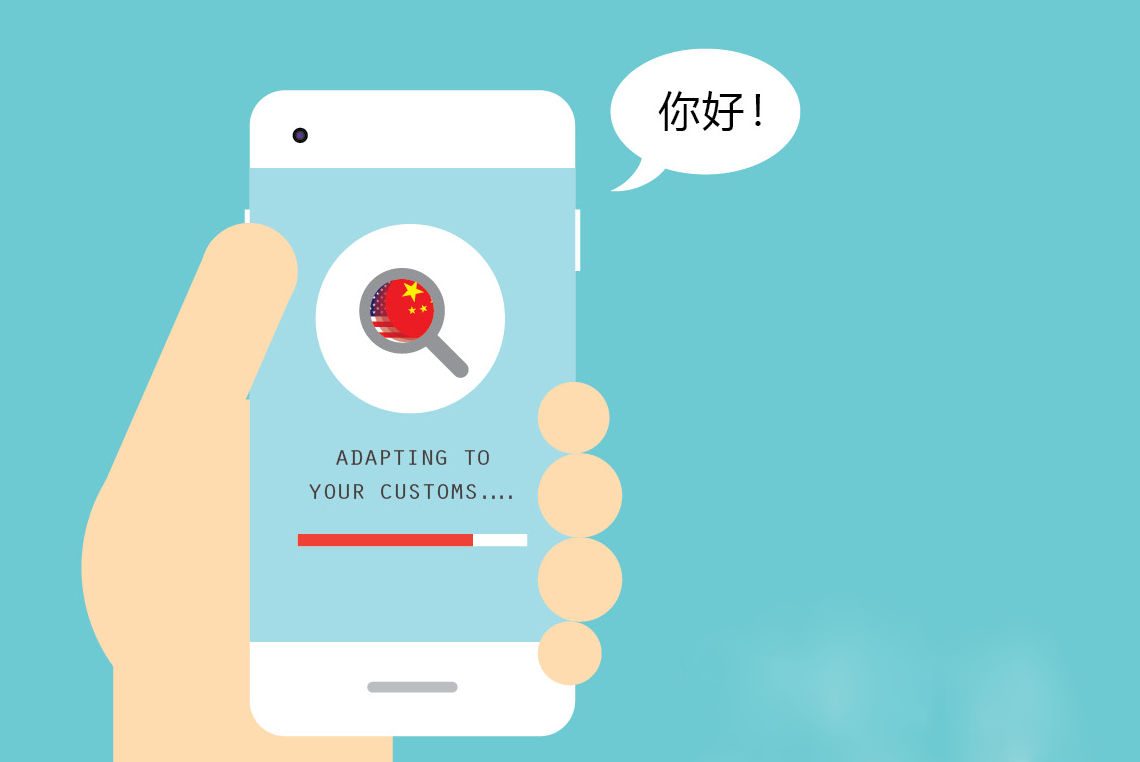 An American entrepreneur walks into a Beijing boardroom to pitch his new mobile phone security applica-tion to potential investors. He speaks no Chinese, yet his presentation – as well as his product – resonates with the all-Chinese audience. To pull this off, the entrepreneur, Chris Barnett, and his company, EyeVerify, invested sig-nificant time and money in the Chinese market – de-veloping a Chinese version of the app, testing it on native speakers, adjusting for accents and accuracy – all before they stepped foot in China. The US-based startup’s level of commitment at such an early stage impressed investors, and may become the new norm for US Internet companies hoping to move into China, where they don’t always possess a clear market advantage.

EyeVerify has seen success with this strategy. Following the bilingual demos of how the app protects devices using photos of the user’s eye instead of numerical passwords, the company secured US $10 million of funding from Chinese security giant Qihoo 360, Sprint, Wells Fargo, and others.

Barnett, EyeVerify’s executive VP of global sales and marketing, said the company set its sights on China and the US from the very beginning because they presented the largest market opportunities.

“If we want to target device manufacturers, most of them are in China. We need to be there,” he said from his office in Kansas. “We got questions from people, ‘Why are you jumping into China right away? Why don’t you pick off something easier, like the English-speaking countries?’”

The reason lies in the alluring figures of China’s Internet market: At the close of 2013, China had 618 million Internet users, and 500 million of those connected via mobile devices, according to the China Internet Network Information Center. With these extreme opportunities come aggressive challenges, such as newly robust domestic competition and the threat of intellectual property theft. Taking on the 1.4 billion giant requires commitment to the market, creative solutions to stiff competition, and special attention to the needs of Chinese companies going global.

Not afraid to commit

San Francisco-based car dispatch app Uber first eyed China in 2013. Over the past two years, the company has expanded rapidly, adding more than 15 cities in August alone, for a global total of about 170.

In China, the company has so far rolled out services in Shanghai, Shenzhen, Guangzhou, and, most recently, Beijing. Uber’s China Launcher Ben Chiang leads each team through the early stages, treating each new city like its own startup. Using Uber’s playbook, Chiang’s first hire in a city is always a local, preferably a native or a resident of more than 10 years. Having a strong local network matters for Uber employees, as they’ll need to establish and maintain relationships with everyone from chauffeurs to government officials. Chiang had to go off-book, however, in deciding to migrate Uber’s maps and payment systems to Chinese domestic offerings Baidu Maps and Alipay. No other market had attempted that in Uber’s five-year history, let alone a market that, at the time, had registered users in the hundreds.

“At the time it was hard to justify it,” Chiang recalled. “We dedicated an entire engineering team just to make sure we did that integration. Baidu and Alipay were our top priorities.”

This investment allowed the company to smoothly expand to cities that lacked a brand-aware cohort of expats like Shanghai, and perhaps helped the Beijing launch pull in more Chinese customers than Chiang and his team expected. In the first two cities, Shanghai and Guangzhou, Chiang said there were questions around the company’s commitment to China. “That is never the problem now,” he said.

Chris DeAngelis, general manager of Alliance Development Group, which provides Beijing-based business devel-opment services to companies such as EyeVerify, agreed that in China, building relationships and trust can be more important than in other markets.

“They really have to like you and trust you to want to work with you, and the best tech doesn’t always win,” DeAngelis said. Silicon Valley can be “a little aggressive or arrogant,” he said, and Chinese companies don’t respond to that.

Chiang noted that Beijing is “one of the fastest growing cities in Uber’s history, by almost all metrics.”

But whether the internal success story can fend off the domestic competition has yet to be seen. For the past year, Beijing streets have been abuzz with the chimes of Kuaidi and Dididache, taxi-hailing apps owned by China’s tech giants, Alibaba and Tencent, respectively. Pitted against each other across e-commerce and consumer tech realms, Alibaba and Tencent turned the taxi-hailing app scene into another price-cutting battlefield, and together burned through 2 billion RMB in driver and rider incentives. Uber entered the market with little brand recognition and significantly higher priced services.

When asked about whether competi-tion in the capital was a concern, Chiang answered with a cool, “for sure,” adding, “We face this everywhere.”

To differentiate their offerings from taxi hailing or other private car services, Uber is positioning itself as a lifestyle company, à la Starbucks, where customers pay more because they can expect a better, more con-sistent product.

“I don’t really think that much about competitors because I can’t really control it,” he said. “I don’t know what they’re going to do. But if I know that the users that I already acquired come back, then that’s how I win over time.”

Uber also hopes to attract repeat customers with a new, Beijing-only product: People’s Uber – a nonprofit, at-cost ridesharing option that sits right next to the company’s black car services in its app. The nonprofit element developed from a legal conflict: local laws ban ridesharing businesses. On the marketing side, the low-cost option keeps customers engaged, even if they aren’t always ordering Audi A6s. Chiang said this may not entirely solve the competition issue for Uber, but “throwing money at the problem is just not the way we’re going to do it.”

Chiang is referring to the story of group-buy-ing coupon company Groupon – which now serves as the what-not-to-do-in-China fable for US tech companies. Key lessons: hire and empower local staff, and, as Chiang said, don’t compete through unsustainable price slashes. Chiang had a front-row seat to the tragedy, as he was working for competi-tor Lashou at the time.

Chiang keeps these lessons in mind while leading Uber in China by competing with more innovative tactics such as People’s Uber. Joining the fray hasn’t been easy, but deferring another year might have closed off the market to foreign ventures for good.

“Now is the time to take our first steps. We want to be riding that wave of growth in the mobile area,” said Ioannis Verdelis, founder and COO at Fleksy, which will be featured in Apple’s iOS8 this fall. “It used to be that companies had to be a certain size before they would consider interna-tionalizing. (Now) you can stay in SF and transcend different time zones.”

The speed of dealings in China appeals to many US Internet companies operating in China. Barnett of EyeVerify said negotiations with Chinese companies require far less back-and-forth than American ones.

“In the US, you’re supposed to pretend you’re above it all and not ask for prices. It takes weeks,” he said. “If we’re going to bargain, let’s bargain, let’s make a deal.”

China legal specialist and lead writer of the China Law Blog, Dan Harris, often fields questions from businesses that want to set up shop in China. He cautioned that the surprising speed of dealings, while attractive to entrepreneurs, can actually put US companies at a competitive disadvantage.

“Your Chinese counterpart will often try to rush you into making a decision that works for (them) but not for you, even though there really is no rush,” Harris said. “Avoid that mistake.”

Catering to the Chinese need

Over the last year and a half, DeAngelis has seen a rise in Chinese companies going westward – and they’re looking for foreign tech companies to help them do that. This is one space where US companies do have an edge over domestic counterparts.

EyeVerify has benefited from this trend. Barnett said the company changed a few small but sig-nificant practices to be more available to Chinese customers. First and foremost, they align half of their day with the Chinese workday. This practice might sound familiar to those in China working for MNEs, taking conference calls at 2 a.m. By reversing the practice, EyeVerify once again shows its commitment and gains an edge over other US companies who stick to standard operating hours. He’s there whenever a customer wants to do a demo or talk about his product. Barnett also caters to Chinese clients by opening up lines of communi-cation on Chinese terms. Yes, he has WeChat.

Opening up to Chinese companies can mean in-tellectual property becomes vulnerable, but most of the tech companies Business Now spoke with weren’t overly concerned about it. DeAngelis commented, “If it’s not China doing it, someone else will.”

Likewise, if entrepreneurs don’t take a risk in China, someone else will. Many startups coming to China are equipped with this brand of dogged realism. They understand the nights may be late,  the dealings may take a new level of engagement, and the field is more crowded than ever with domestic startups, but the potential rewards still seem irresistible. Uber’s Chiang, for one, remains optimistic about his company’s chances.