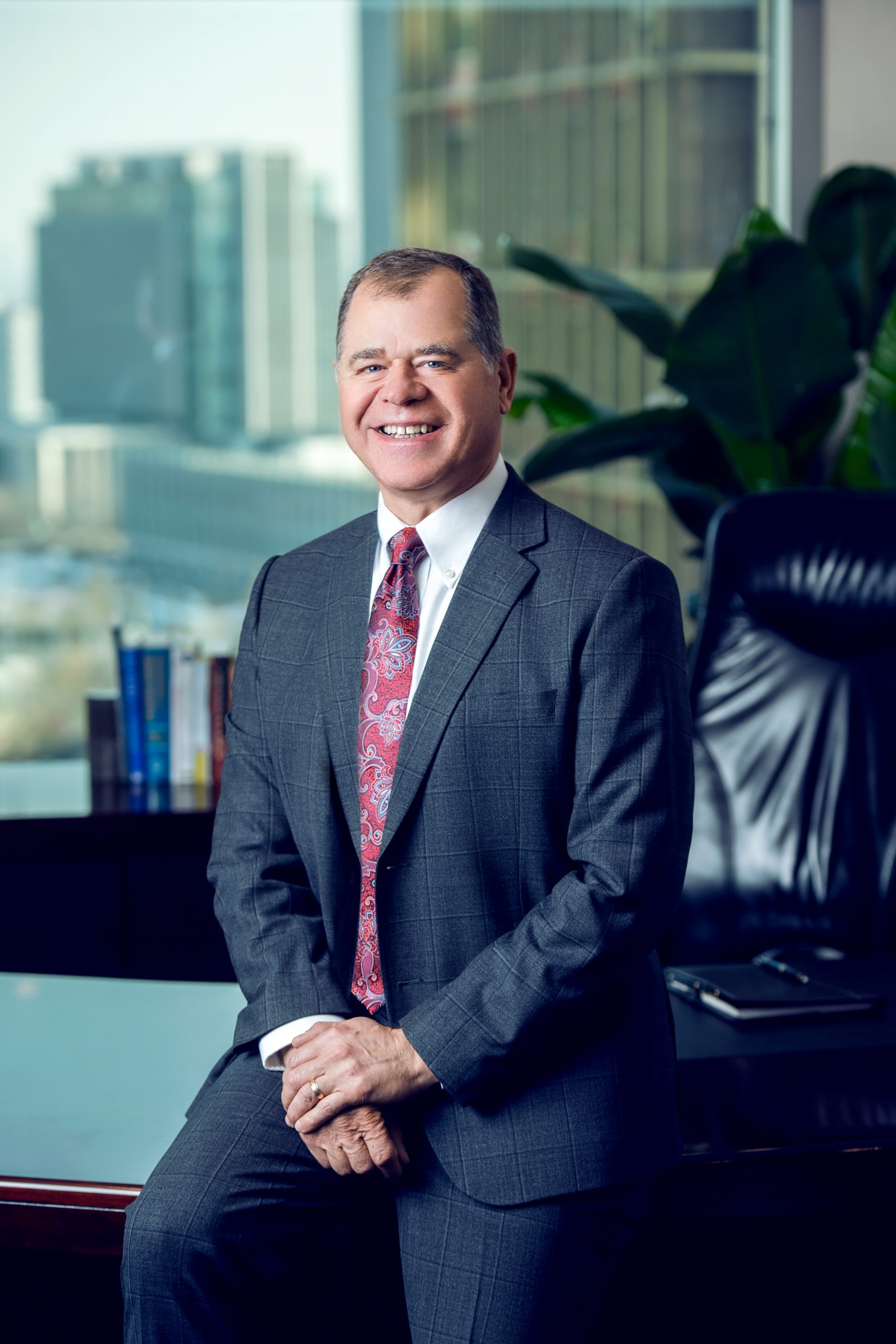 The Importance of Diversity, Inclusion, and Female Empowerment

Join AmCham China in a fireside chat with Bill Arnold, President at ConocoPhillips China and Male Ally of the Year, presented by the 2021 Women Empowerment Awards in China. Arnold shares insight about how he promotes diversity in the workplace, encouraging accountability at all levels, and his own journey as a Male Ally.

Having worked for ConocoPhillips over an accomplished 35-year tenure, Arnold has served in 13 cross-functional roles across the company, with stints in 10 different locations, six countries. Now based in Beijing, he has brought learnings and best practices from his globe-spanning experience to Diversity & Inclusion (D&I) practices in China, in hopes of establishing ConocoPhillips China (COPC) as a leading D&I example within ConocoPhillips and effectively maintaining a level playing field for female employees in China.

You were the winner of the Male Ally of the Year at the inaugural Women’s Empowerment Awards in China. What does that award mean to you personally? What work have you done that you are most proud of?

Bill Arnold: Firstly, I’m very honored and humbled to receive this award. I know the other nominees have also done so much in this space – so I’d like to sincerely accept this award on behalf of their efforts as well. I am merely a representative of all the male allies who took actions and personally committed themselves to advancing female equality.

I would also like to give this credit to my niece, who was the catalyst for my transformational journey. 22 years ago, my niece was an aspiring engineer just entering the industry. In this male-dominated occupation, she was struggling due to gender discrimination and wanted my guidance on how to navigate these barriers. I realized that if my talented niece was facing discrimination in the workplace, then countless other women must be too. It made me look in the mirror. Since then, I have personally strived to make a positive influence and feel an obligation to empower women on a professional level.

I am a committed advocate for women and am always trying to support female advancement. I began expanding my network of mentees to encompass more women both inside and outside the industry. Men often have an easier time accessing mentorship and career advancement opportunities, so I’ve made a point of focusing my mentorship efforts on women. Over the last two decades, I have mentored and supported many women who have grown into senior or executive positions in their own companies, and to see so many of them achieve their aspirations makes me so proud.

Who are some of the female leaders you look up to? What leadership lessons have they shared with you?

Bill Arnold: That’s an easy answer, my mother. She gave me a very simple leadership principle, “Treat others as you want to be treated yourself.” She’s 88 years old now and still giving me great advice!

There are spaces for different types of discussions, be it all female networks, or male allies supporting women. How do those conversations differ depending on the participants?

Bill Arnold: When I first started hosting discussions around the topic of female empowerment, I began working with small groups mixed with male and female participants. However, I found that often when females voiced out any problems, male attendees reacted defensively by making excuses for their behavior and self-righteously justifying their standpoint.

Since then, I’ve introduced regular women-only workshops, encouraging female employees to speak face-to-face with me about challenges and opportunities at the workplace. This allows the company and I to better understand their direct perspectives, developing appropriate responses.

During these sessions, an important point of distinction many of my female colleagues wanted to clarify was that female empowerment is about creating a level playing field. Female empowerment is simply about creating equal opportunities for women without preferential treatment and undue benefits. This is a point that is sometimes misunderstood by male counterparts, and something anyone looking to be an effective ally needs to understand – empowerment means equality, not advantages.

Ultimately, men play a central role in advancing equality. Men who want to be allies should focus on listening, providing support and respect at every turn.  It is imperative to bring men into these discussions and workshops so they can understand, appreciate, and act with intention going forward. Men are important actors who should bear responsibility and participate actively in our women empowerment agenda.

You’ve spoken about the importance of identifying unconscious gender bias in the workplace. Unconscious bias, by definition is difficult to not only identify and confront, but then change going forward. What are some of the actions you have taken to confront this issue and do you feel like you’re seeing progress?

Bill Arnold: We encourage the open discussion of gender biases. It’s okay to admit to unconscious biases, and acknowledging that there is a problem is the first step towards improvement. Especially with male colleagues, we try to make everyone understand why these conversations are healthy, so they can proactively learn and independently grow from them rather than feeling defensive or attacked.

One trick I’d like to share is “keeping a keen ear”, which I use to capture unconscious bias in commonplace conversations and behaviors around me. If I hear something that I think could be perceived as bias, I make a mental note to speak to that person individually later on. I do this to clarify intention and explain another perspective, not to confront. Most of the time, people are unaware of how their comment could be taken out of context. I encourage them to go back to clarify or apologize, and these small conversations have been very well received from both sides.

The end result is that people identify their own biases, own up to them, and, hopefully, correct them going forward. Currently, I have a couple of little conversations every week, but I aim to bring that number to zero very soon.

“Ultimately, men play a central role in advancing equality. Men who want to be allies should focus on listening, providing support, and respect at every turn.”

Are there any ways that technology can drive forward and institutionalize this issue to replace more well-intentioned talk?

Bill Arnold: I think the greatest value technology can bring is efficiency, which in turn can contribute towards equality by making it more accessible. For example, online meetings allow me to have a global list of mentees to whom I can speak with regularly. If any one of my mentees want to have a chat, I am just a click away.

The COVID-19 pandemic has arguably helped to accelerate the journey to equality by normalizing remote working conditions. This empowers our employees – some of whom are working mothers – to adopt technologies that enable a healthier work-life balance and more convenience in their daily lifestyle, a win-win situation for both the company and our colleagues.

More organizations are including D&I goals into company KPIs. Besides this, what are some of the other methods that have been effective on moving the issue forward?

Bill Arnold: Shortly after taking the post of president of COPC in late 2018, we incorporated gender equality and inclusion into the company’s culture and vision. Inclusion was included as a China Business Unit (BU) key strategic pillar and D&I goals were established as annual milestones. We hope to include learnings and best practices from other places and other companies, while establishing the China BU as a leading D&I example.

Not only do we openly share our best practices, we’re also on the lookout for great D&I initiatives from other companies in this space. There shouldn’t be secrets or competition for this field, it’s all about pushing each other to succeed and establishing better working environments for us all.

Leadership accountability is also critical to bringing about real changes. At COPC, each leadership team member is expected to have a personal inclusion goal that will be assessed as part of their annual performance review.

Bill Arnold, together with employees at the internal “BBB” event – Beer & Banter with Bill

Where do you think China is on this issue compared to the US? In what ways does the issue differ between the two cultures?

Bill Arnold: Over the past few decades, China has made great strides in female empowerment. There is a famous saying in China that “Women hold up half the sky”; over the past few decades, many Chinese companies are recruiting more women than ever, and beyond that, providing the opportunities and tools to succeed. According to the National Bureau of Statistics, in 2019, women accounted for over 33% of Corporate Directors in China. In 2020, women accounted for more than 40% of all employed citizens.

While women in China and the US share similarities, there are cultural and attitudinal differences towards marital roles, expressivity, social interaction, and preferences. Sometimes we need to take diverse approaches to drive the agenda of gender equality and women empowerment. While both sides have made tremendous progress, I think we need to continue upping the status quo around the world. China and the US are similar in that there’s still a lot to be done, where some are doing a great job with D&I but there are many others that have a long way to go.

We’ve talked about the great progress we’re seeing. Where do you think we’ll be on this issue in 5 years?

Bill Arnold: Five years from now, I think we will have successfully established a safe space for men and women alike, so they feel comfortable speaking openly about these issues. I also believe unconscious bias will be minimal, I hope it will be a rare occasion rather than an accepted mistake. We’ve definitively made progress in this regard, but I look forward to this becoming the norm soon.

Globally speaking, we’re all working together to move the ball and have such strong momentum on D&I initiatives right now. I hope to see a level playing field across the spectrum for everyone in the near future. Now that we’re teaching younger generations about this at a ripe age, they should understand how important this issue is and carry the torch.

This article is from the AmCham China Quarterly Magazine (Issue 3, 2021). To access the entire publication for free, sign up on our member portal here.