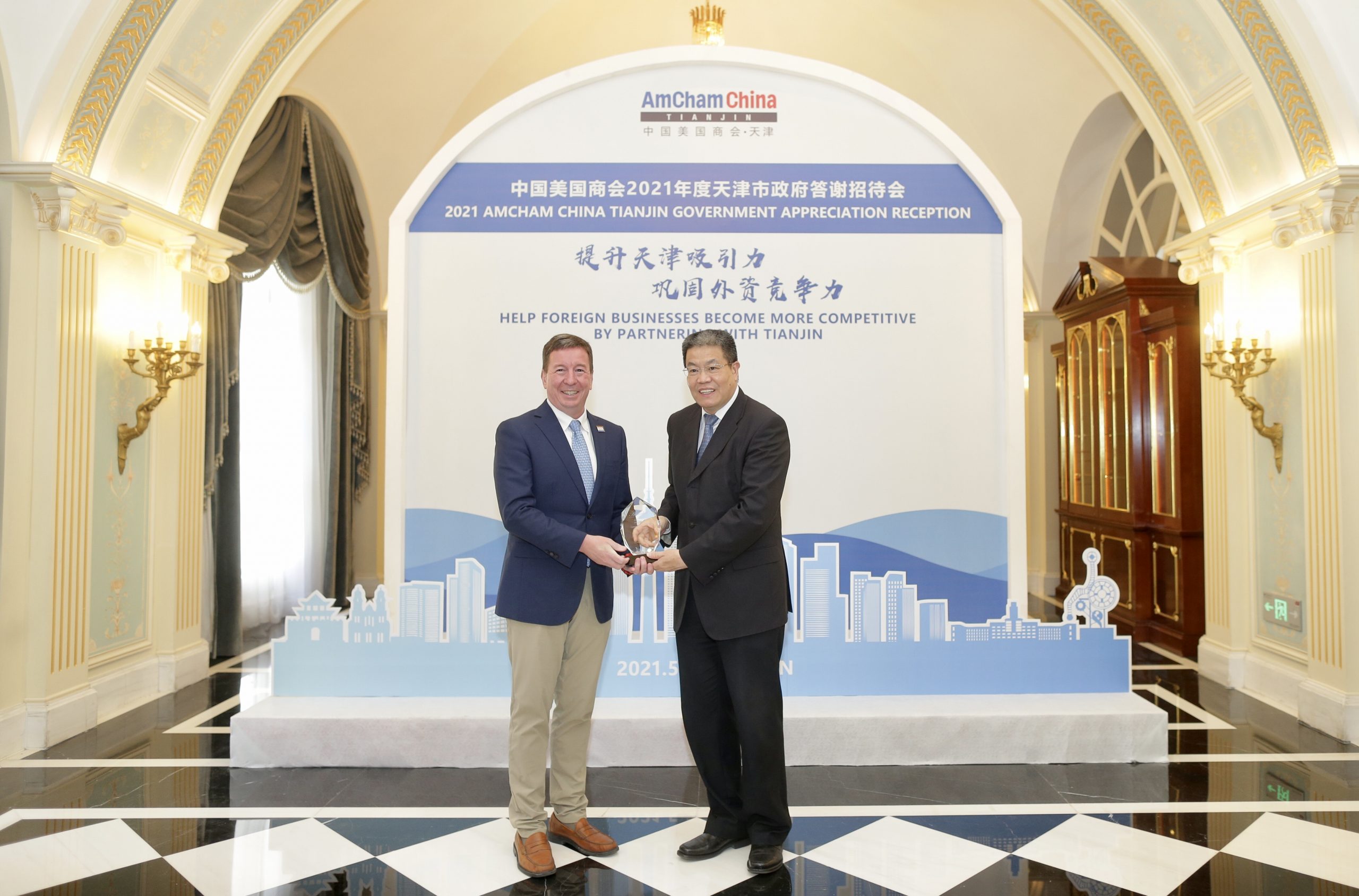 On May 25, AmCham China Tianjin Chapter held its annual Tianjin Government Appreciation Dinner, capping an afternoon of activities that included a dialogue with the Tianjin Municipal People’s Government.

To kick things off, a delegation representing the AmCham China Healthcare Forum met with officials from the Tianjin Healthcare Security Bureau, with representatives from more than 20 healthcare companies in attendance. AmCham China Tianjin Chair Michael Hart got things underway with some opening remarks, after which the two sides discussed relevant topics, including the procurement of medical equipment and products, pricing reform, and other industry policy updates.

AmCham China Chairman Greg Gilligan was then honored as Senior Advisor of Foreign Investment by Zhang Aiguo (pictured top), the Director General of the Tianjin Municipal Bureau of Commerce, after which he was interviewed by local media (above right).

Gilligan, Hart, and AmCham China Vice Chair Colm Rafferty then led a small delegation, accompanied by Tianjin Vice Mayor Wang Xu and Zhang Aiguo, to visit the Tianjin Kailuan Mining Bureau Building. The current structure was first built in 1921, and occupies the same site where Herbert Hoover worked in the early 1900s for the Bewick, Moreing & Co., a British mining company. Hoover would later become the 31st President of the United States in 1929.

After the fascinating tour, a private meeting was held between the AmCham China delegation (above left) and Wang Xu. Following that, a dialogue meeting was held between the Chamber and various Tianjin Municipal Government officials. In attendance were 24 delegates from AmCham China, representing 12 companies, as well as representatives from 16 departments of the Tianjin Municipal Government. Gilligan delivered the 2021 American Business in China White Paper to the Tianjin Vice Mayor (above right) and both stressed the importance of American businesses to Tianjin and their joint expectation for more investment in the future. AmCham China delegates then had the chance to raise questions with the government officials, all of which were answered at length and in detail.

The day ended with the Appreciation Reception and Dinner, hosted at the Ritz-Carlton Hotel in Tianjin. 180 guests attended the reception banquet, at which speeches were made by Gilligan (above left), Hart (above right), and Wang Xu. Guests were treated to a double bass performance courtesy of the Tianjin Julliard School (below), after which they had the opportunity to mingle with old and new business partners as well as government friends.