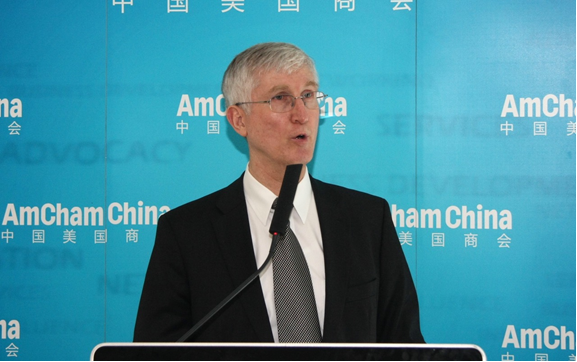 In recent months, the US business community in China has been asking an important question about the US-China Bilateral Investment Treaty (BIT). The BIT will benefit businesses operating in each country by providing non-discriminatory treatment to foreign companies, but there is a catch: each country’s negative list, which identifies industries that will be excluded from the benefits of the treaty. The ongoing negotiations of the BIT have led US businesses to ask, “If our industry is not on the negative list, does that guarantee us market access?” This is wishful thinking, according to former Deputy US Trade Representative and Chairman of the AmCham China BIT Task Force, Tim Stratford.

On July 7, following a summary of the Strategic & Economic Dialogue with US Embassy officials in which the BIT was discussed at length, Stratford presented the findings of his massive study on market access in China. Stratford and his colleagues reviewed hundreds of thousands of Chinese regulations to answer that question. His answer to the market access question is a simple no. Even where a given industry is not on the negative list, you still have Chinese market barriers to deal with. This includes the myriad licenses, approvals, and other regulatory hurdles that apply to Chinese companies.

Although absence from the negative list will not guarantee market access, being on the negative list is far more problematic. As such, Stratford emphasized the need for companies and industry associations to lobby for a very narrow Chinese negative list. AmCham China’s BIT Task Force can assist with that important process, and thus interested persons should join AmCham China’s BIT Task Force and raise their concerns. Those interested in joining the task force should contact Ian Curtiss at icurtiss@amchamchina.org.