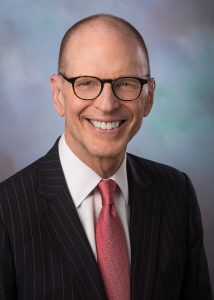 I have spent my professional life advocating for the U.S.-China commercial relationship, including over 20 years while working in the US Department of Commerce, and after that as AmCham China Board member, Vice Chairman, and Chairman, continuing to advocate in China and the US for our membership.

Serving the most vital AmCham in the world, the Board has the responsibility to continue driving our success in an often-stormy bilateral environment. Vigilance is the operative term. So while it continues to be critical to listen to the membership on policy issues and act accordingly, we also must ensure internal efficiency and effectiveness managing our funds and our staff.

Though spending much of the past year outside of China, I am proud that I was still able to make special contributions to the Board by, among other things: chairing the successful committee to improve AmCham’s structure and relationship with the Cooperator Programs, playing a lead role in the series of successful virtual Door Knock meetings with Washington political leaders, and participating in our Search Committee to find a new President. Waking at 3:00am to join our monthly Board meetings was well worth the effort.

Considering alphabetical order, I will probably be the last name on the voting ballot. So please be sure to save one vote for me.

The Honorable William Zarit is Senior Counselor at The Cohen Group, where he advises western multinationals working in the Chinese commercial market. AmCham China Board Chairman 2017-2018, he has been an active Board member since 2014.

From 2009-2014 Mr. Zarit was Minister for Commercial Affairs at the U.S. Embassy in Beijing, overseeing the U.S. Department of Commerce’s trade and investment promotion and trade policy activities in Beijing, Chengdu, Guangzhou, Shanghai, and Shenyang. Prior U.S. Commercial Service posts included Deputy Assistant Secretary overseeing Commercial Sections in U.S. Embassies and Consulates worldwide; Regional Director for East Asia/Pacific; and leadership roles in the U.S. Embassy in Kuala Lumpur and the American Institute in Taiwan. He achieved the Career Minister rank for his service.

Before joining the U.S. Commercial Service Mr. Zarit was Economic and Commercial Program Officer for the New York-based National Committee on U.S.-China Relations. Prior to that he served as Marketing Manager/China for Pacific Bell’s international operations, preceded by his work as Project Manager for the first IBM PC dealer in China, China Business Associates. Mr. Zarit also served as Mandarin Chinese Interpreter for the U.S. State Department Language Services.