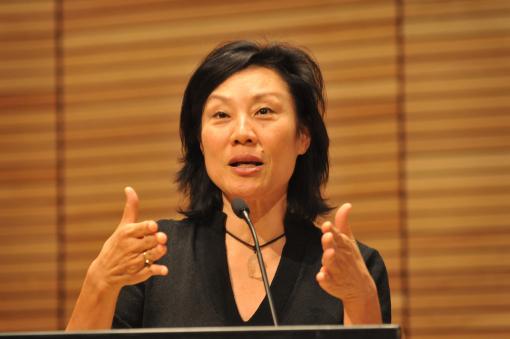 Janet Yang is an award-winning Hollywood producer most well-known for her production of The Joy Luck Club and work on Steven Spielberg’s Empire of the Sun. She is a Queens, New York native, holding a B.A. from Brown University in Chinese studies, and an M.B.A. from Columbia University. Boasting a thoroughly accomplished career in Hollywood, Janet got her start reviving World Entertainment in San Francisco – a small distributor of Hong Kong films – and eventually expanded it into the exclusive North American representation rights holder for all films produced in China. Through this momentously successful venture, Janet found her stepping stone into Hollywood.

Once in Hollywood, Janet continued to forge her own success using skills and prowess honed early in her career. Between 1985 and 1987, she was hired by many major studios including Universal, MGM, and Paramount, and was responsible for brokering the first sale of Hollywood movies to China since 1949. At the same time, Janet began her journey into the world of film production with none other than Steven Spielberg. Together with Spielberg, she was instrumental in the production of the award-winning Empire of the Sun, securing permissions and liaising with both local and national levels of Chinese government.

Janet’s achievements are as numerous as they are inspiring, and her story starting in Queens and shuttling between the US and China exemplify the pivotal role that one’s roots can play in their success. Named one of the “50 Most Powerful Women in Hollywood” by Hollywood Reporter, Janet brings insight into not only success and leadership as a woman, but success and leadership in an industry as challenging as Hollywood’s.

On March 30, Janet will be one of our honored speakers for the 2018 女 Economy Summit, discussing her unlikely journey to the upper echelon of Hollywood, and her international success in the film industry. Come join us to hear Janet’s amazing stories and insights on the current status and future outlook of the women economy.