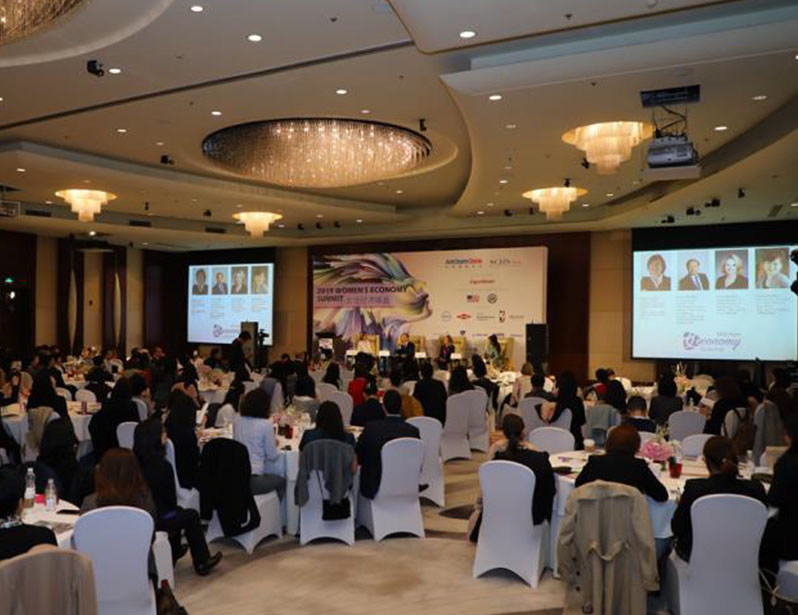 On April 10, AmCham China hosted the third annual Women Economy Summit, the largest gathering of women leaders in the AmCham China community, with a mission to raise awareness of the key role women play in global economic development. Building off the momentum of past Summits, the theme for this year was Advancing Women’s Prism – Closing the Gap.

In a full-day conference that attracted more than 250 attendees, an all-star cast of panelists and keynote speakers from some of the worlds largest multinationals explored international, regional, and national best practices that produce concrete steps for companies and individuals to foster a healthy gender balance, inspire female employees to reach their full potential, and unleash the power of the women economy.

The Summit kicked off with opening remarks from Su Cheng Harris-Simpson; Founder and CEO of SCHSAsia and member of the AmCham China board; Clare Fearnley, Ambassador at the New Zealand Embassy (pictured above); Colm Rafferty, VP Asia Pacific at Vermeer China and Vice Chair of the AmCham China board; Hong Mu, Director-General of Liaison Department of the All-China Women’s Federation; Robert W. Forden, Deputy Chief of Mission at U.S. Embassy Beijing; and Jialei Lin, Programme Officer at UN Women China.

Welcoming the audience, Harris-Simpson light-heartedly noted that the Summit had indeed hit its goal of 20% male attendance, further going on to state how pleased she was with not only the gender representation, but representation from public and private sectors, Fortune 500s, NGOs, and from women-owned companies. Rafferty then noted the importance of this year’s Summit coinciding with AmCham China’s 100th year of heritage, pledging that AmCham China would continue its mission to raise awareness of the key role women play in economic development.

Next, the audience was treated to an in-depth presentation of findings on Advancing Female Leaders in Asia provided by Management Development Services (MDS) and presented by Jonathan Wang, Principal Consultant and Director of MDS Hong Kong (pictured below). Wong prefaced the recent findings by underlining that China is leading the world in women’s contribution to GDP, in part due to the fact that 70% of Chinese mothers continue to stay in the work force, while noting that China impressively boasts 80% of the world’s self-made billionaires.

Diving into the report, Wong explained the methodologies and dimensions of the study. By measuring 22 behavioral leadership practices grouped in six clusters, the study looked at who the effective male and female leaders of today are and how they behave differently. The study determined there was no difference between men and women in almost half of the 22 areas measured. But the study found that female leaders are more hands-on and want to work with their team throughout the duration of a project. This results in more feedback, excitement, tactical precision, and higher production rates. Contrastingly, male leaders were found to score higher in strategic, delegative, and restraint dimensions.

Wong concluded the study’s findings by outlining how the results can be applied in the support of female leaders in today’s socioeconomic, geopolitical, and business environment. Most importantly, Wong noted, is prioritizing the development of skills such as strategic thinking, innovation, business acumen, and financial analysis. As well, it was found that fostering and developing a growth-mindset culture, as well as creating exchange platforms for leaders to support each other, are extremely impactful avenues for companies to explore.

The first panel session of the morning featured Cindy Jensen, Managing Director and Founder of INPOWER ONE; Wei Liu, VP of Dell Technologies & GM, China Center of Excellence; Elisabeth Martin, VP of Boeing China Research & Technology; and Min Qin, VP of Public Affairs at Mars China, and delved into how corporations can help to close the gender gap.

Jensen (pictured above) opened the discussion noting that China could see a $2.5 billion GDP increase from achieving gender parity – the equal contribution of women and men to every dimension of life, whether private or public. Min responded by emphasizing how at Mars they believe in both culture and principles, and that these beliefs are the most critical factors in ensuring the gap is bridged, to have a culture that enables gender parity.

Martin (pictured above) highlighted that despite working in such a traditionally male-dominated industry, Boeing is 24% female including an executive level that is over one-third female. Martin explained the many initiatives and efforts Boeing takes towards closing the gap, such as an empowerment strategy, more paid parental leave, childcare, and a “return flight program” to welcome and assist women who return after a career break.

Liu (pictured above) quickly highlighted that diversity and inclusion is a key driver and core part of Dell’s DNA. “As a leader, you have to drive for awareness,” says Liu, “and make sure the whole organization understands, recognizes, and appreciates diversity. Second, you need to advocate. How do you make sure women’s voices get represented in leadership when there are not many? We must support programs intentionally targeted towards women and their careers.”

Discussing the momentum of male champions, Martin put that, “It’s upon us all to help men who may feel unwelcome to instead feel welcome, and to help them understand why this is beneficial to their company. Some may feel threatened, like we are taking a bigger piece of the pie, but really the pie grows. We need to help men to understand and feel comfortable so they, too, can get on board and see the value.”

In closing, Qin (pictured above) described the unique qualities that women bring to the table and the strong impact of these qualities as the gender gap progressively closes. “Women tend to be more peace-loving, compelled to mediate, and inspired to bring their families together. Women are often less willing to take risks, striving for perfection instead, and are more comfortable with assured success. As well as being nice, a woman needs to be successful – it is exactly these strengths that make women more able to be successful if we bridge the gap. Instead of being blind to those differences and trying to make people look more like each other, we want to make sure we hold on to our great strengths.”

For the second panel of the day, Harris-Simpson welcomed this year’s cast of male champions to discuss their best practices and insights on how to support women in business in the drive for gender parity. Men can play a crucial role in empowering women within the workplace and changing long entrenched practices that are harmful towards women’s career growth. Thus, the important of male champions.

The question posed to panelists was how they can leverage their position to advance the fight for gender equality. Stepping to the stage to share their best practices to support talented female leaders and foster empowering corporate cultures were Yoke Loon Lim, President Greater China at Dow Chemical; Fernando Vallina, Chairman at ExxonMobil (China); Daniel Chia Shih, Senior VP, Legal and Corporate Affairs, General Counsel at Walmart China; and Derek Chang, CEO at NBA China.

To open the discussion, Harris-Simpson asked why it is so important to promote women empowerment and inclusiveness. Shih (pictured below) began by noting that of Walmart’s 275 million daily customers, the majority are women. This means understanding their female customers is a requirement for their business success. Moreover, with Walmart’s workforce in China being comprised of over 60% women, and leadership that is over 50% women as well, it is not enough to just understand the customers, they need to understand their workforce as well. Complementing Walmart’s stance, Vallina followed by stating that, “Diversity is just good business. At the end of the day, business is about people, and if you choose your employees and leadership from just 50% of people, you will not have the best possible talent.”

Next, panelists were asked how they demonstrate commitment within their organizations. Chang described that it all comes down to people in leadership positions – they have to believe it is important. These people, he says, have to demonstrate through their actions and their priorities. Loon explained that for Dow, inclusion is one of their four business pillars, going on to mention that in Asia more than 40% of their leadership is female. For Loon personally, he spends much of his time on a one-on-one basis, coaching and sponsoring. Loon went on highlight the important difference between mentoring and sponsoring, stating that, “Mentoring is more for helping the individual develop the skills, sponsoring is really about helping them to get what they want, and using your personal credibility to bet on the ability of the person. This is much more important.”

In Closing, the Gap

The 2019 Women Economy Summit, filled with insights, thought-provoking discussion, and best practices for all in attendance to take away, was a monumental success and yet another step forward in the fight for gender parity. While we look eagerly towards next year’s Summit, the discussion on gender parity, diversity and inclusion, and the advancement of the women’s prism is one to carry every day and to build into our corporate cultures and daily lives as we work towards a brighter, more equal tomorrow.

For more information about the Women Economy Summit and to get involved in the Women’s Professional Committee, contact Yining Liang (yliang@amchamchina.org, +8610 8519 0863).