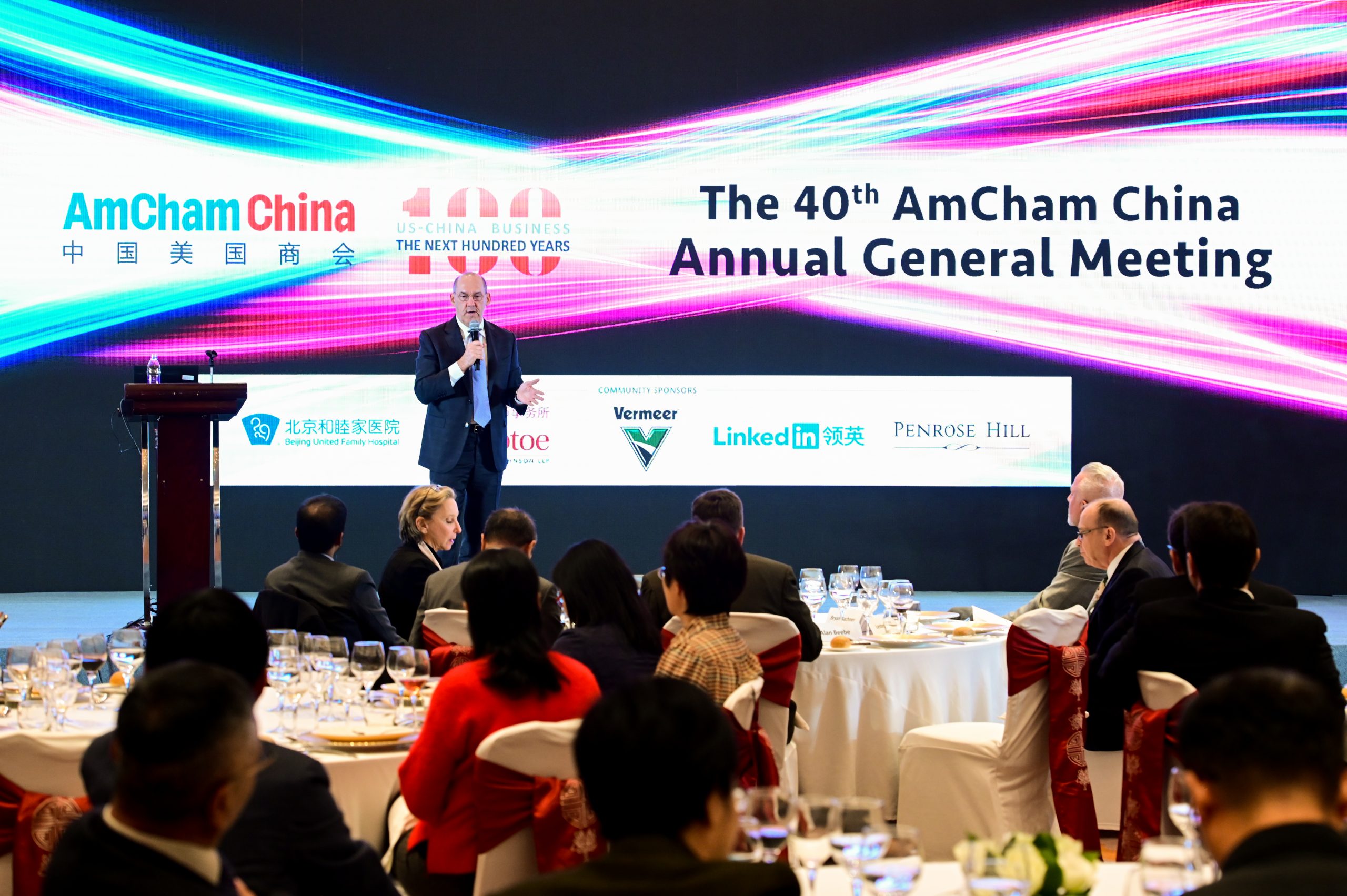 On November 18, AmCham China hosted the 40th Annual General Meeting in Beijing. The event was held at the Hilton Hotel with a limited number of guests attending in-person due to ongoing COVID-19 prevention measures, while many more attended virtually.

The evening kicked off with opening remarks from AmCham China President Alan Beebe, who introduced Chairman Greg Gilligan. Gilligan highlighted the Chamber’s advocacy work over the past year, reflecting on the over 15 ministerial meetings with Chinese government officials, 19 virtual DC Outreach meetings, and over 180 events in total. He continued, saying that, while COVID-19 has created new challenges, it has also enabled the Chamber to expand its offerings and innovate in its approach to advocacy work.

Gilligan observed that, considering the current bilateral relationship and the global pandemic, the work AmCham China is doing is “more influential, more important, and more relevant than ever.” Gilligan thanked Beebe, who will be leaving AmCham China in the spring, for six years of fantastic work. Gilligan, too, is coming to the end of his two-year tenure as Chairman of the Board of Governors (BOG), and thanked the Board Members and Vice Chairs for their support and willingness to engage over the past two years.

Gilligan and Roberta Lipson of United Family Healthcare presented the first award of the night, the Pioneer Award, which went to William Zarit. The Pioneer Award recognizes an individual who has made significant contributions to the US-China relationship, including as AmCham China Chairman 2017-18. Throughout his career, Zarit has worked keenly to further US-China relations. While accepting his award, Zarit reflected on his career, from his previous work at the US Department of Commerce, to his current role at The Cohen Group, saying that one constant has always been his passion to help US business in China succeed.

Above: the Chairman’s Award is presented to Zhou Bing.

Next, the Chairman’s Award was presented to Zhou Bing. This award from the Chairman recognizes an individual whose tireless service and dedication to the Chamber deserves special recognition. Zhou, who currently serves as the Vice President of Dell Greater China, thanked his fellow members on the Chinese Government Affairs Committee (CGAC), of which he is the co-chair, while accepting his award. He praised AmCham China as being globally recognized as one of the most active organizations in China working to effectively help the US-China relationship, and said he looks forward to more years to come.

After the Chairman’s Award, Beebe took the stage once more to present the Service Awards. Beebe started off by recognizing that the volunteer culture that AmCham China has built over the past decades is the “secret sauce” of the organization. The Forum & Committee awards went to the Information and Communications Technology (ICT) Forum and the Tax Forum respectively. The Chapter awards were presented to Scott Shaw of Central China, Rochelle Mathias of Northeast, and Justine Qian of Tianjin. The final two Service Awards were presented to Ashwin Kaja, AmCham China’s new General Counsel, and Bryan Bachner, Co-chair of the Sports Committee.

As the awards wrapped up, Beebe presented a special photo collage to Gilligan as a token of gratitude for his two years of fantastic service as Chairman. In particular, Beebe recalled Gilligan’s resourcefulness and contributions during the initial COVID-19 outbreak period. Gilligan said he was proud of his nine years of service to AmCham China, and credited the organization with enriching his experience both personally and professionally. Beebe also recognized the outgoing BOG members, and those members who will continue to serve on the Board in 2022, for their dedicated service.

The last portion of the evening saw Beebe invite the head of the Election Committee, Lester Ross, to introduce the 2022 BOG candidates. Ross thanked his fellow Election Committee members: Jeffrey Layman, Viki Huang, Jingyu Wang, Didi Liu, and Martin Winchell for their service and invited each of the current candidates to make campaign speeches. The 14 candidates running for the seven open BOG seats were each given two minutes to present to the audience. To see the full list of candidates, click here.

Above: Lester Ross, head of the Board of Governors Election Committee.

As the evening came to an end, Beebe thanked attendees, both virtual and in-person, and the AmCham China staff for their incredible efforts on behalf of AmCham China over a what has been both a challenging and productive year.