AmCham China at the B20 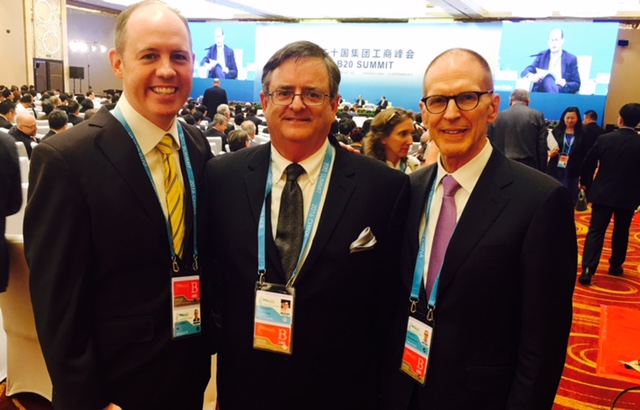 Editor’s note: AmCham China will host a G20 debriefing with four US Embassy officials on Sept. 12.

AmCham China members played prominent roles in the talks at the B20 (Business 20) Hangzhou Summit, held Sept. 3-4 preceding the G20 (Group of 20) Summit.

AmCham China participated throughout the 2016 B20 process as a member of the Trade and Investment Task Force. This working group’s policy paper can be found here and the key messages from the B20 2016 to the G20 can be found here.

Prior to the official start of the summit, AmCham China – together with AmCham Shanghai and the US-China Business Council – co-hosted a roundtable discussion between members and US Ambassador Max Baucus and Deputy US Trade Representative Robert Holleyman. AmCham China’s membership was well represented at the table, with the likes of Mary Andringa of Vermeer, Steven Chapman of Cummins, Huang Chenhong of Dell, Zhang Jiantao of Coca-Cola, Roberta Lipson of Chindex, Dan Sun of Honeywell, Peter Wong of Dow Chemical, Elton Huang of PwC and more. The discussion allowed business leaders to share their top concerns and how they think the US government can best address them. Baucus also provided updates on the Bilateral Investment Treaty (BIT) negotiations and encouraged vocal business community support of the Trans-Pacific Partnership (TPP).

One particularly active member at the B20 summit was Colm Rafferty of Vermeer, who is also a Vice Chair of AmCham China. This wasn’t Rafferty’s first time in Hangzhou, as he previously worked at Alibaba in 2000 as the company’s 120th employee. His two employers – Jack Ma of Alibaba and Vermeer’s Mary Andringa – united to Co-Chair the Small and Medium-Sized Company and Entrepreneur (SME) Task Force.

“G20 leaders are recognizing how significant SMEs are to GDP, GDP growth, employment and social stability,” Rafferty said. “Leaders also recognize that SMEs are under stress. So I’m encouraged about the SME focus and look forward to seeing tangible, structural reforms such as the B20 has recommended to be adopted and implemented. These practical, pro-growth policies will make a real and lasting improvement in economies and people’s lives. That’s what makes it very rewarding to spend the time and effort working collaboratively in a forum such as the B20 and G20.”

Rafferty acknowledged that SMEs have been inordinately impacted by the increasing complexity and cost of new rules, regulations, laws, standards and certifications – “many designed with good intent,” he said.  The task force recommendations include reducing complexity and cost with solutions such as digital tools and additional broadband deployment across developed and developing economies.

The G20 countries represent 85 percent of the world’s economy. The purpose of the B20, then, is to create a platform for the international business community to discuss global policy concerns and provide actionable recommendations to the G20 government leaders on issues relating to global economic governance and international economic and trade regulation.

The B20 Summit itself was opened by remarks from China President Xi Jinping, who emphasized that the member countries of the G20 should “work together to build an innovative, open, interconnected and inclusive world economy to achieve robust, sustainable, balanced and inclusive growth.” Xi’s remarks were followed by a series of panels on topics such as “Developing More Effective and Efficient Global Economic and Financial Governance” and “Encouraging Robust International Trade and Investment.” Speakers included top business leaders, including representatives from member companies, world leaders, such as Canadian Prime Minister Justin Trudeau, and leaders from international organizations, such as the International Monetary Fund and World Bank.