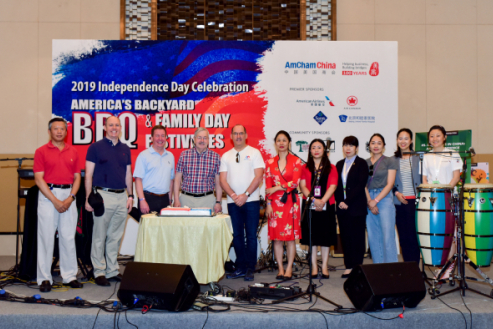 AmCham China celebrated the 243rd Independence Day in style on Saturday July 6th, with a fun and relaxing party at the JW Marriott Hotel in Beijing. Attended by close to 400 people, including U.S. Ambassador to China Terry Branstad, this family-friendly event attracted participants from all corners of the American community in Beijing and, once again, was one of the city’s best summer parties!

A set from local a cappella group Man Sing – featuring former AmCham China chairman William Zarit, among others – on the hotel lobby stairs kicked off proceedings, before guests were treated to a dazzling array of food and drinks. There were plenty of games to keep the younger attendees entertained, with face painting, T-shirt decorating, a balloon-making clown, water guns, and other games all on offer. Supported by our member companies and sponsors, the family activities allowed attendees to try their hand at various interactive sports booths, including hockey, football, and golf.

AmCham China Vice Chair Greg Gilligan spoke on behalf of the AmCham China community, before Ambassador Branstad took to the stage to address the assembled crowd. Following the short speeches, Man Sing doubled up with the National Anthem and a moving rendition of Amazing Grace, before the cake was cut and live band The Hat rocked out for the audience.

AmCham China President Alan Beebe entertained the crowd during the raffle prize draw, a number of guests went away with prizes that ranged from brunch, afternoon, and dinner vouchers to air purifiers, microphones, silk ties, and staycations – including a few lucky double winners!

Thanks, as always, to the generous support of our sponsors, without whom none of this would have been possible: