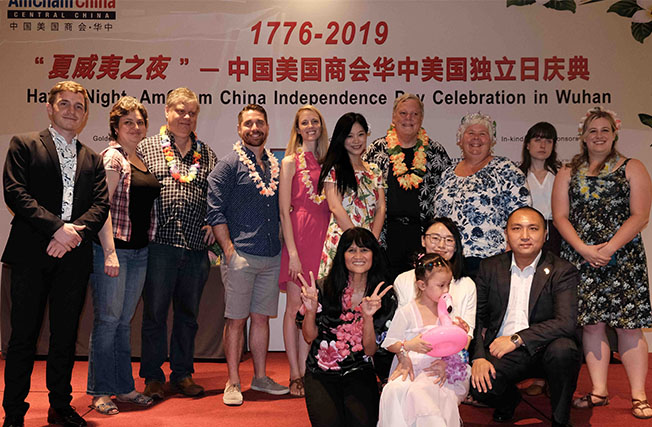 The event started with fourth of July traditions, such as singing the National Anthem with officials from the US consulate and cake cutting with Jamie Fouss, the Consul General in Wuhan.

Attendees enjoyed a fantastic time playing games and engaging in a host of activities, including a quiz with amazing prizes, traditional games (such as children’s hotdogs eating competitions and adult’s beer drinking competitions, and ‘Sack Race’) and Hawaiian-themed games. In addition, attendees enjoyed the Hawaiian decorations as well as face painting, a miniature  volcano eruption, game machines, and more. The party was getting in full swing when the live band kicked off and the whole crowd erupted in dance.

Still, the most exciting part for the adults was the raffle. The raffle prizes included one round-trip airplane ticket from Shanghai to the US provided by United Airlines, a one-night stay in a suite at Wuhan New World Hotel, and buffet coupons for two people at the Wuhan Hilton Hotel. AmCham China, Central China Chapter would like to congratulate all our prize winners!

All in all, this year’s event was a huge success and was made possible by the generous support of the event’s sponsors: