You are here:
AmCham China LegacyIssuesNews 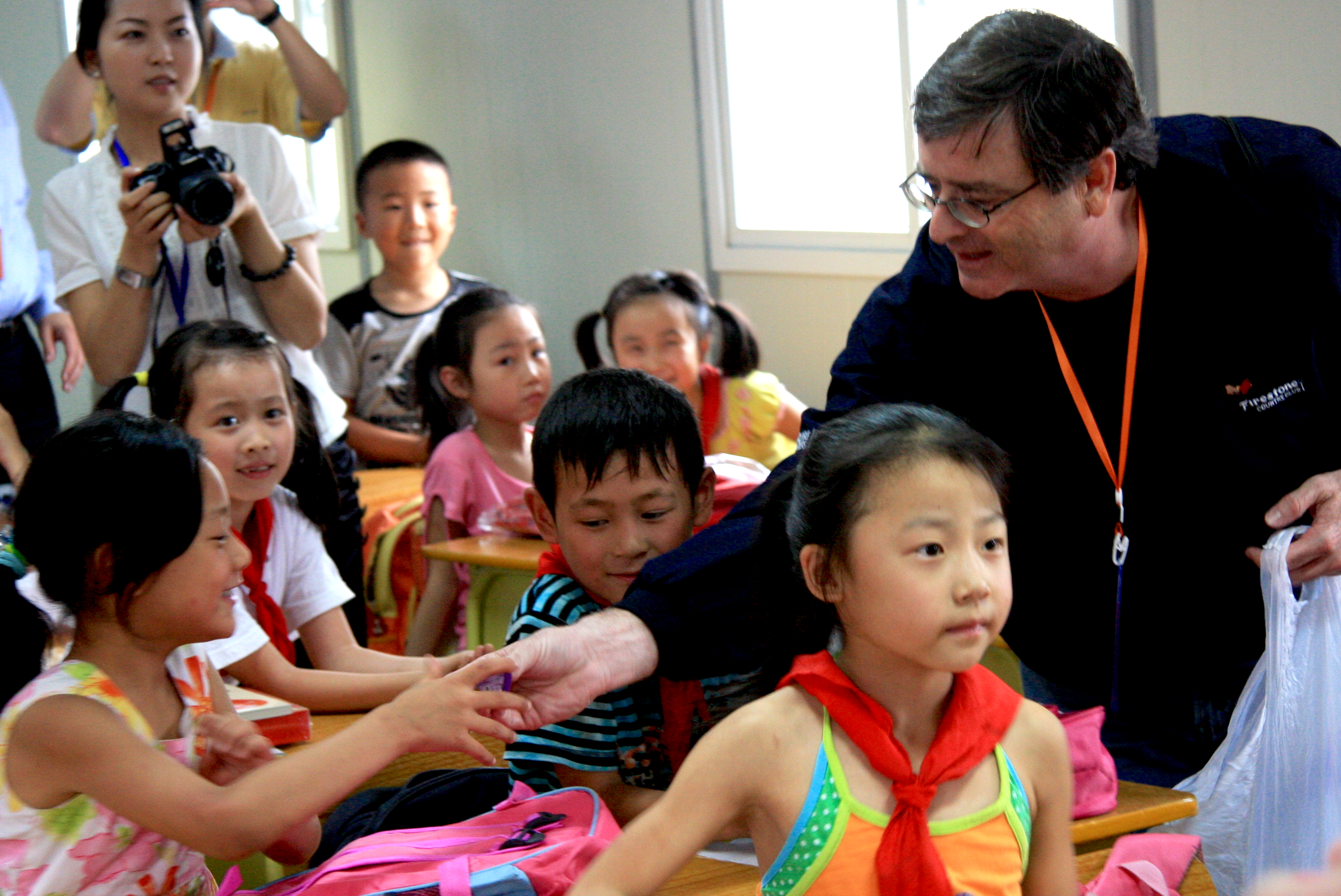 In 2016, AmCham China celebrates its 35 year anniversary since re-establishing itself in the PRC in 1981. To commemorate this milestone, the chamber put together a package of stories that share AmCham China's lasting impact on US-China relations, the business environment in China, the US-China business community and the people of China.

AmCham China traces its history all the way back to 1919, when it was “AmCham Peking,” and the chamber’s commitment to lifting up the people of China goes back just as far. Media reports from 1920 reveal that AmCham Peking’s President Harold Faxon was at the fore of American famine relief assistance when 20 million Chinese were at risk of starvation due to crop failures. And throughout the chamber’s 35 years since reforming in 1981 as AmCham China, the chamber has sustained this commitment.

The chamber has brought together significant donations from after disasters such as the Sichuan earthquake, and it’s also facilitated collaboration among companies on charitable activities, advocated to the government on behalf of NGO interests and, more recently, become home to though leadership on how companies can most effectively impact Chinese society.

When AmCham Peking reemerged in 1981 as AmCham China, one of the founding members, Peter Lighte, says “giving back” wasn’t in the vocabulary during that era.

“In the early ’80s you couldn’t give anything back,” Lighte says. “If you bought goods for Chinese friends (at the friendship stores), they could get in trouble.”

Slowly, charity efforts started to spring up in the chamber from the ’80s onward, but became crystalized and focused in the mid-1990s with the founding of the Corporate Social Responsibility (CSR) Committee. At that time, CSR was a new concept and hadn’t been formalized. The norm at the time was for American companies to write generous checks. The committee sought to change that.

A group of members responsible for CSR within their companies assembled, including Andy Andreasen, Jim Gradoville, Bill Valentino, Kelly Lau, Christian Murck and Pia MacRae. These folks then built up information on CSR best practices to share with other member companies. An early project of the group was compiling a database of local NGO projects that needed support, and sharing it with the broader membership. In this way, an NGO in a remote province needing help with accounting could connect with a major accounting firm looking to do pro bono work. The members of the committee created and maintained the database themselves on a purely volunteer basis.

Building up capacity for CSR requires government support, so AmCham China members put together a hardbound book highlighting the works of companies to better the lives of Chinese citizens. It was distributed to government agencies that received the White Paper, and was a well-received effort to show the government the good that foreign companies produce in China, according to Andreasen.

As the committee increased the membership’s ability to match up with CSR work, it also selected the recipients of funding from the American Ball, AmCham China’s signature charity fundraiser. In the beginning, the committee gave smaller grants to five or six projects because they were inexperienced NGOs who might not know how to handle larger grants.

Eventually, CSR became more mainstream among AmCham China member companies and Chinese NGOs gained more experience, leading the chamber to allow for larger, more strategic grants to up to three charities fitting a certain theme, such as sustainable farming or children’s health. Today, the chamber and the committee leave the selection of grantees to the American Ball’s top sponsors. In recent years the sponsors’ charities have included worthy organizations such as the Yao Ming Foundation and Teach for China. This helps event sponsors to seamlessly support a single organization or cause of their choosing in all that they do – a hallmark of the latest approach to giving back.

In his years of helping decide deserving recipients of the American Ball donations, Andreasen says the choices were unanimous and he found it fulfilling to see the chamber and member companies push forward projects in China.

The committee’s move away from funneling funds also represented a larger shift taking place in how companies approached charitable activities. The group held a strategy session in 2009, and rebranded as the Business Sustainability Committee. Rather than act as a dispenser of donations, the members now organize thought leadership events, such as “Philanthropy with a Lasting Impact” and “Creating Shared Value” – a concept defined in the Harvard Business Review in 2011 as “creating economic value in a way that also creates value for society by addressing its needs and challenges.” At these events, members share the great work that their companies do that provides lasting, impactful, measurable results within the organization’s larger goals. For example, Goldman Sachs invests in women entrepreneurs, zinc-producing company Teck focuses on the health impacts of zinc deficiencies in humans and Visa supports financial literacy. This isn’t a one-off check writing or one-time staff volunteering day – these companies want to create lasting impact.

“There’s a lot of political will and wealth in China,” says Wenchi Yu, Asia-Pacific Head for Corporate Engagement at Goldman Sachs. “You now see more thinking and strategy through social investment.”

But besides long-term support, member companies have also shown their generosity in the wake of disasters across China.

As current AmCham China Chairman James Zimmerman says, giving back is “in our DNA.” He was on the ground in Sichuan in 2008 to see this DNA in action. During that year’s annual DC Outreach in May, an 8.0 magnitude earthquake struck near Chengdu, killing nearly 70,000 people and leaving 5 million homeless. When the leaders of AmCham China met the morning after the earthquake, they resolved to pledge RMB 1 million of AmCham China’s reserve funds for earthquake rescue and relief. “We said to one another, that this was the right thing to do – without question,” writes Zimmerman in a 2016 column for Business Now.

Within a month, AmCham China put together a delegation of 38 member companies to visit the devastated city of Deyang, with the permission and support of the Sichuan government. “Entire buildings were reduced to rubble entombing all inside,” Zimmerman writes. “The silence was eerie.”

On top of the RMB 1 million AmCham China donated, the chamber also raised an additional RMB 1.7 million for reconstruction at the 2008 American Ball. The combined donations of all member companies surpassed $87 million dollars, both in cash and in-kind donations.

AmCham China also led initiatives to build many schools, including three primary schools in regions of Heilongjiang province impacted by flooding in 1998. Done in partnership with UNESCO, the project united financial support from 50 member companies and individuals in the name of educating disadvantaged Chinese.

After the man-made explosion that rocked Tianjin’s TEDA area in 2015, member companies and their employees gave masks to emergency workers and free rooms to the displaced. United Technologies Corporation, the parent company of TEDA-based Otis, donated RMB 2 million to the impacted fire fighters and their families and to safety education programs to prevent similar losses in disaster situations.

Over the years, how companies define the way they give back to the community has evolved from “corporate citizenship” to “corporate social responsibility” (CSR) to “corporate shared value” and “business sustainability.” But in the beginning, no matter the terminology used, many members say it was all foreign to China.

“There’s no real cultural tradition of Chinese businesses supporting social or charitable projects,” says Andreasen. But more than cultural mores, Andreasen finds legal hurdles to be the hardest obstacle for companies looking to give back to Chinese society.

“The regulatory landscape is the biggest challenge,” says Andreasen. “There are a number of organizations that were starting to flourish that are now unsure because of the negative pressure of taking money from foreign organizations. Of course the cultural difference was always there, but things were going beyond that.”

AmCham China advocates on behalf of member companies for less restricted regulations for NGOs in China. The CSR Committee is now the Business Sustainability Committee and it has a chapter in the annual White Paper, which is then distributed to key government agencies across China. A perennial priority in the chapter: creating a friendlier environment for NGOs.

“(The Foundation Law of 2004) looked like for a moment there was something, a breakthrough, but there were problems with it, too,” says Andreasen. “There was a high bar for setting up a foreign foundation in china, a capital requirement (minimum 8 million RMB) and there had to be a supervisory unit at the central government level to oversee the organization.”

This year, a Draft Foreign NGO Management Law alarmed many NGOs operating in China because of the high level of government oversight described in it. AmCham China once again stepped in as a way to present comments to the government without pinpointing any one member company.

For this law, which goes into effect Jan. 1, 2017, AmCham China’s government affairs team surveyed 136 NGOs inside China and those outside who do projects in China. The survey revealed many uncertainties about how the law would play out. Using these insights, a small group of members and concerned organizations held meetings and partnered with a team of pro bono attorneys. The group submitted detailed comments to the National People’s Congress and also helped submit a letter, along with many other business associations, highlighting the negative impact of the proposed law on business and the economy.

“AmCham China has been a really important actor in helping the community to think about the law and form an opinion and make comments on it,” says Elizabeth Knup, the Ford Foundation’s China Representative and a critical member of the CSR Committee, serving as Co-chair for many years.

Members and US government representatives come together to share updates on the Foreign NGO Management Law in May 2016.

The greatest impact of all

When the US was considering whether to accept China into the WTO on a permanent basis in the 1990s, many pointed to China’s track record of human rights violations. But AmCham China members worked on behalf of accepting China on the basis that increased trade would improve life for all in China.

“We made the argument that trade and investment, which are by their nature mutually beneficial, can serve as a solid foundation for the relationship, and that greater prosperity for China will itself be something that will advance and improve the lives of the Chinese people, and in one way or another improve human rights,” says John Holden (AmCham China Chairman in 1997). “And those arguments won the day.”