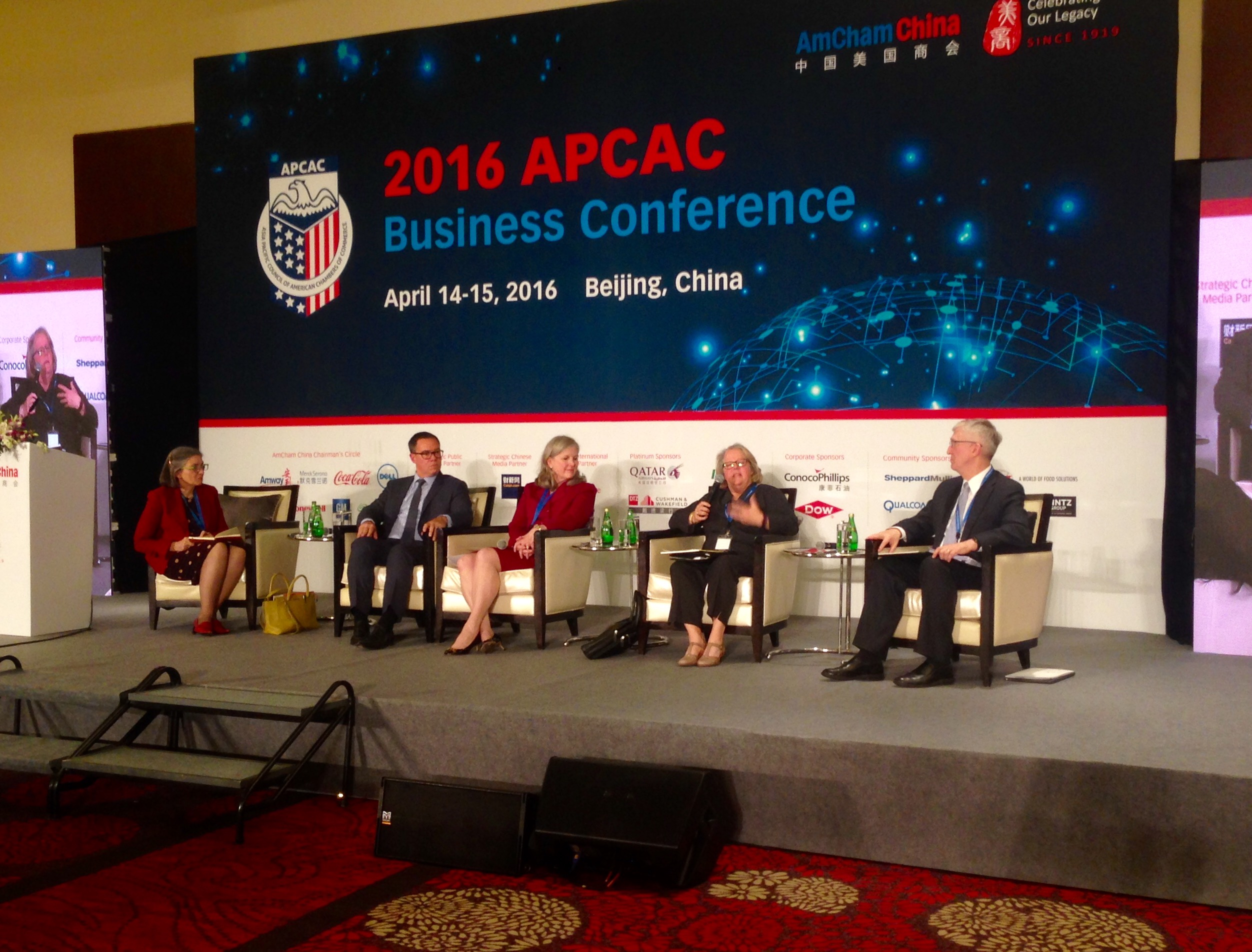 Trade agreements such as TPP and the US-China BIT are promising, though prolonged, opportunities for the US in Asia. Philippa Jones, Managing Director of China Policy, brought together a panel of experts on Thursday, April 14, to discuss the current status of these agreements and what their larger implications are.

Ernie Bower, Senior Adviser and Sumitro Chair for Southeast Asia Studies and Codirector of the Pacific Partners Initiative at the Center for Strategic and International Studies

“RCEP is substantial but nowhere near as comprehensive as TPP.”

“If we do trade well, we’re likely to have a peaceful century. Economics is the foundation of enduring security in Asia.”

“I think the US hasn’t articulated a strategy for Asia yet. The TPP is not sufficient, it’s a start, on a trade strategy.”

“APEC has small, incremental wins. They’re not big headliners but in the aggregate, they make trade easier. “

Tami Overby, Senior Vice President for Asia at the US Chamber of Commerce

“Let me tell you right now: TPP is going to pass. We have a pro-trade president

“The only thing I’ll say about the us presidential election: it’s a fact-free zone. The facts are clear, with our FTA partners, we do very well. We believe that TPP is going to create jobs and economic opportunity.”

“If the US were controlling the agenda (of TPP), this would have been done years ago. Each country has the same weight in negotiating. It’s a very fragile balance.”

“We call it a 21st century agreement because it covers areas such as how to regulate the cloud, and not requiring servers to be localized in every country to unleash the power of the internet.”

“This is the best opportunity we have to address market issues since China joined the WTO in 2001.”

“Will it be enough to mobilize the business community to support the BIT? We don’t see it yet and the most recent signs have been discouraging.”

“What will the creation of the TPP do for the vitality of the WTO? USTR’s original goal was to have TPP get people thinking about trade liberalization again, to get so many people involved in liberalization that it would carry over to the WTO.”

Diane Farrell, Deputy Assistant Secretary for Asia at the US Department of Commerce

“The statistics for the KORUS (South Korea and US) free-trade agreement stand as an excellent example of a modern trade agreement. There have been 38,000 new jobs in the US since it went into effect in 2012. Korea is largest Asian investor in the US.”

“There’s no question – when we can break down these barriers for trade, it’s a win-win for everyone.”

“The biggest winners out of TPP are going to be small and medium enterprises. Creating standards for labor, environment, IP protection, these are huge game-changers for citizens of the US as well as the regions we are talking about.”

“We’ll watch for coming meetings as to what APEC’s appetite is for expansion. Speaking with colleagues, they’re hesitant to change the mix too much because the organization couldn’t handle the additional weight.”