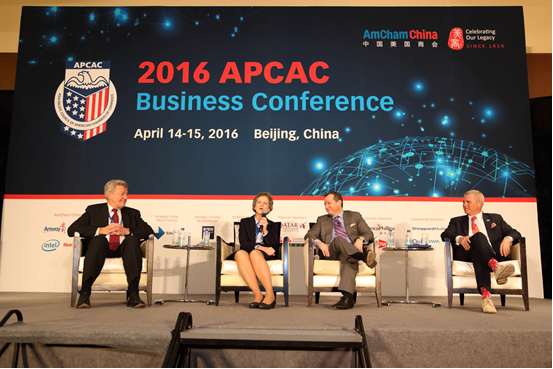 The 2016 APCAC Business Conference brought together 29 American chambers of commerce from around the region as well as other 300 business, policy, diplomatic, government and media leaders. Highlights included Gary Gensler’s remarks and the 25th Anniversary Gala.

Scott Kennedy moderated comments on the foreign NGO law and other developments impacting how corporations invest in society.

How can companies best respond in a moment of crisis? Kit Kwok, Partner at DLA Piper, drew out the expertise of the panel on crisis management by presenting a hypotehtical crisis and asking them to respond.

Thursday marked the first day of the 2016 APCAC Business Conference, which brings together 29 American chambers of commerce from around the region.

Gary Gensler fielded questions ranging from commodity futures to the 2016 presidential campaign. Gensler is uniquely qualified to answer these, as he was Chairman of the Commodity Futures Trading Commission under President Barack Obama for five years

Moderated by China-Britain Business Council Chief Executive Stephen Phillips, this panel discussed renminbi internationalization and how established financial centers are positioning themselves to benefit from this.

APCAC Soundbites: The State of the Asian Economy

At the DTZ/Cushman & Wakefield Panel on the State of the Asian Economy, Sean Wang, Vice President of Greater China guided the group through questions on domestic and cross-border issues impacting the economies of Asia-Pacific.

This panel discussed China’s Silk Road initiative and the implications of the new Asia Infrastructure Investment Bank, with special attention given to the practicalities.

Experts talk about the hottest trade agreements involving the US and Asia right now, TTP, RCEP and the US-China BIT.