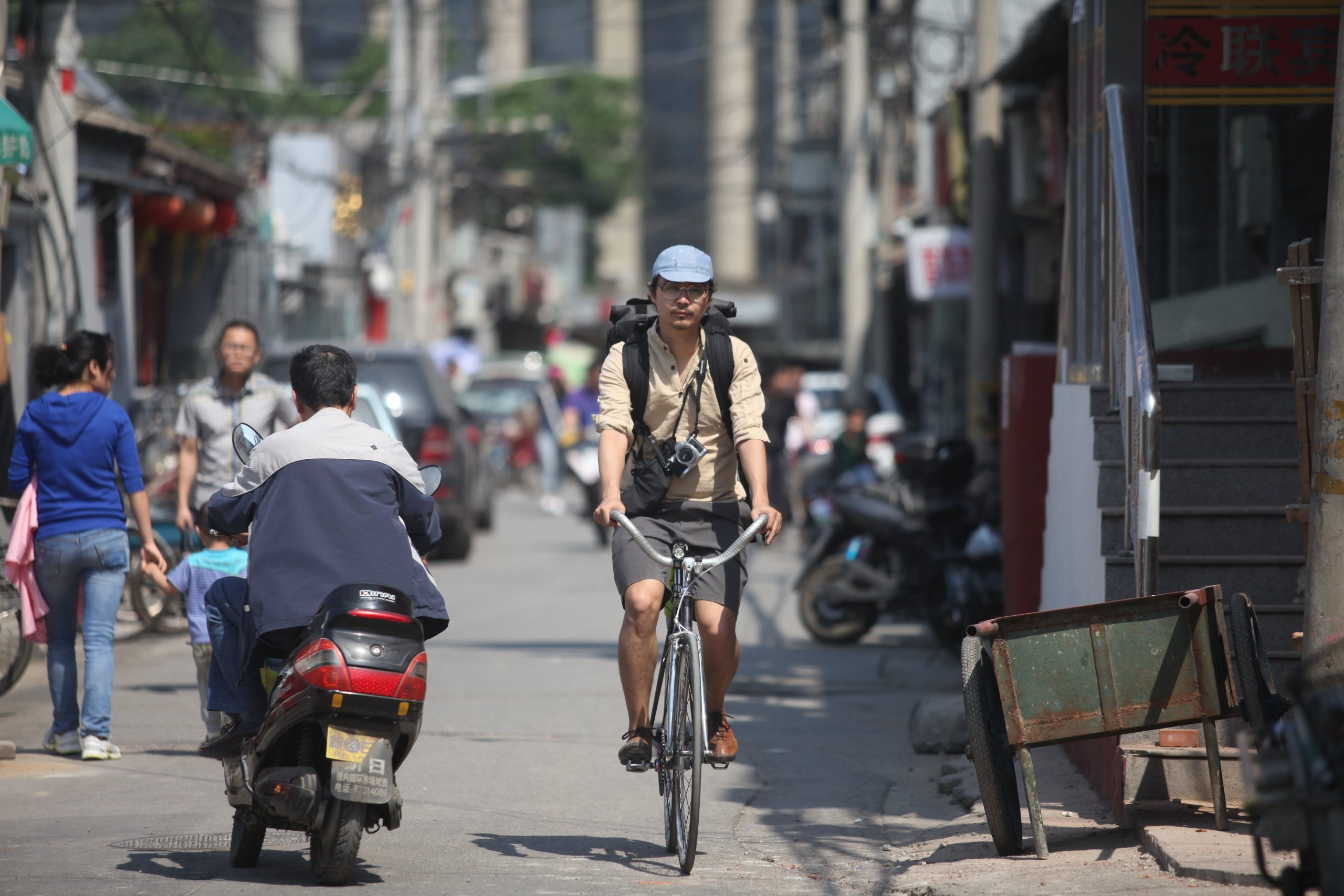 While cities such as New York have kickstarted new bike-share programs to push cycling forward, Beijing and many other Chinese cities have pumped the brakes on biking. While sitting still in bumper to bumper traffic on one of Beijing’s six ring roads (and soon to be seven in 2017), it's difficult to remember a time when rush hour was dominated by the bicycle. In 1986, 58 percent of Beijing residents considered the bicycle their preferred mode of transport, according to Natooke Bike Shop owner Ines Brunn. This number has dropped to 15 percent as of 2014.

Brunn, a German-born cycling fanatic, can be seen pedaling long distances around the city, performing daring tricks as a bicycle gymnast or working in her shop, located in Wudaoying Hutong across from Yonghegong Lama Temple in Beijing. Prior to opening Natooke, Brunn often traveled to Beijing in the early 2000s before moving to the city in 2004. She has closely observed Beijing’s bike culture over the past decade.

“When I relocated here in 2004, I suddenly noticed a complete change, already in those three years, cyclists were becoming less and less, and cars were becoming more prevalent,” Brunn said. “The Olympics were coming up, the city wanted to be modern, they wanted to have no more of those old things that stood for poverty, (like) the bicycle.”

“What used to be a really nice bike lane was now a third of the size and much more unsafe,” Brunn said. This rapid cycling infrastructure decline occurred simultaneously with efforts in many other cities around the globe to establish new bike lanes along crowded city streets.

In the years following the Beijing Olympics, China received increasing domestic and international pressure to reduce carbon emissions and unclog above-capacity transit arteries. Government media campaigns changed from labeling cycling as an out-of-date bad habit to encouraging residents to leave their cars at home and switch to pedal power.

City governments around
China are launching large-scale cycling infrastructure projects in order to further propel the rebirth of the sport and culture. One such project is urban bicycle sharing. The number of public shared bikes in China has increased from zero to 650,000 in seven years, according to Bloomberg. China now operates the most bicycle sharing programs in the world. Beijing has opened 120 bike share stations throughout two central districts, Chaoyang and Dongcheng. These stations allow residents a quick and inexpensive way to get around the city.

The Beijing city government has also launched a US $490 million Municipal Greenway Project. Beginning construction in 2012, the completed project will create 1,000 kilometers of running and cycling trail equipped with dozens of Wi-Fi access points. The Greenway Project aims to link many of the city's pre-existing parks, rivers and canals. The major greenways will be located along the Second Ring Road, within Garden Expo Park and Forest Park, and in Haidian District starting from Tsinghua University and running north along the Summer Palace and into the mountains.

This sudden change of tone is music to the ears of Beijing bike enthusiasts and cycling industry professionals. Some Beijing-based companies have developed a bike culture among employees. Joe Wood, Director of Corporate Programs at cultural learning center The Hutong (an AmCham China member company), loves flying around town on bike and is one of many Hutong employees who rolls into work on two wheels.

“It's by far the most convenient way to get around,” Wood said. “I know exactly when I’ll get picked up and dropped off. It puts me in a good mood and wakes me up. It also helps me continue to learn more places around the city instead of being driven around everywhere.”

For utilitarian cyclists, biking can be a great way to adjust to license plate restrictions on personal vehicles. Greg Gilligan, Managing Director of PGA Tour China and former Chairman of AmCham China, glides into work once a week aboard a beach cruiser when he is unable to drive his car.

Beyond the commute to work, cycling around Beijing’s outskirts and suburbs can be a great way to let off steam after a long week. John Zane, AmCham China’s Director of Business Support Services, when he is not advising companies on best China business practices, is riding along the Wenyu River in Shunyi. In order to feel more at peace on longer rides, Zane uses an earplug in the ear facing the road. This allows him to enjoy the river and escape the big city feel.

Beijing has a long ride ahead to regain its status as a global cycling hub. The Beijing city government has set a target to raise the percentage of residents who cycle from 15 to 19 percent by 2018. While still far behind the 58 percent of 1986, this new goal shows the government’s interested in implementing swift social and infrastructure changes. Beijing has the opportunity to return to its former status as fast or faster than it fell.

Cameron O'Shaughnessy is a Communications Intern at AmCham China.

“Cycling around Beijing’s suburbs is a great way to let off steam after a long week.”

“I ride my beach cruiser once a week to work to accommodate the license plate restrictions.”

“(Riding) helps me continue to learn more places around the city instead of being driven around everywhere.”