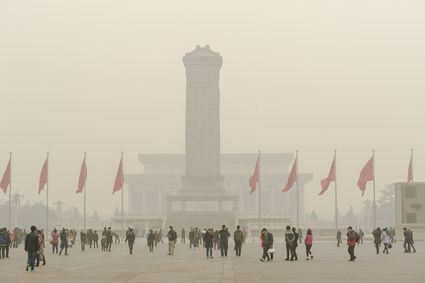 Here we are again. A little more than a year since the Paris Climate Conference and Beijing’s first ever air quality “Red Alert,” Beijing has again been hit by a stretch of really poor air quality. I wrote last year that the smog “was a rude reminder that while 2015 had been one of the best years in recent memory in terms of air quality, Beijing…has many years of work ahead of it.” This week has been another reminder that, while 2016 was better overall than 2015, Beijingers still need to be prepared for the risks associated with air pollution, both in the short- and long- term. Of course, much of what needs to be done about pollution is beyond the control of any individual – that’s part of what makes us feel so powerless in the face of it – but that does not mean that a bit of awareness and some simple precautions cannot help give us back a measure of control.

When health professionals think about air pollution’s health effects, we categorize them as short and long-term risks. In the short-term, for most people, the effects are limited to what you would expect: irritation in the respiratory tract and eyes, headaches, and occasionally some nausea. For those with asthma or heart conditions, or for the very young and very old, the short-term effects can be more severe and include asthma attacks, increased risk of infections, and increased rates of cardiovascular events, particularly strokes. In fact, my patients tend to concentrate on the air pollutants’ effects on the lungs, while many more people die of cardiovascular disease linked to increased air pollution levels.

On the other hand, the long-term risks do, in fact, include severe repercussions such as lung cancer. The World Health Organization (WHO) suggests that lung cancer is caused by outdoor air pollution at rates very similar to secondhand smoke exposure. Recent studies show increasing evidence that long-term exposure to particulate matter is associated with chronic obstructive pulmonary disease, at least in adults. For children, we also know from studies done in the US that growing up in an area with heavy air pollution levels will mean smaller lung volumes versus those who grow up in non-polluted environments.

There are, of course, some common sense steps one can take to minimize both the short- and long-term air pollutions risks. On days when the AQI is elevated (above 100 for sensitive groups, 150 for everyone else), wearing a mask is appropriate. If masks are not N95 certified and worn when the air pollution is elevate, they don’t do anything significant with regards to pollution exposure reduction. The cute cotton masks you see on the streets are useless as they do not filter out the smaller particles.

As important as filtration is mask fit. If the seal against the face isn’t tight, you just aren’t protected. And like most things that have to do with health, fancier and more expensive does not mean better: I use the 3M N95 mask, which is cheap and effective for reducing particle exposure. People should also limit the amount of outdoor activity they do during the most polluted portions of the day, which is usually dawn to dusk.

Finally, air purifiers do, in fact, remove particulate matter from the air. Given that 85% of most people’s time is spent indoors, air purifiers make a lot of sense, and these should be used indoors in the home and in the office. There is no data to show that the removal of particulate matter via air purifiers leads to better health outcomes, but there’s no reason to suspect it won’t. (I tell my patients there are no trials comparing skyjumper survival rates with and without parachutes, either. Some things – not many, but some things – do not need a randomized controlled trial.)

Organizations that bring people to China have a role to play, too. Deciding to move and possibly bring a family to a place where exposure to outdoor air can be a health risk should not be an easy decision. Organizations should take seriously their duty to care for their staff: providing air purifiers in the office, providing masks, and being flexible with working on high AQI days are all appropriate steps to take.

Nevertheless, it’s also important to keep relative health risks in perspective. It makes little sense for a person who smokes to worry about pollution. Not exercising out of fear of being outside will probably have a bigger impact on long-term health than occasional exposures. An unhealthy diet over a lifetime is almost certainly a bigger health risk than intermittent exposure to air pollution. I encourage my patients to take reasonable precautions such as masks and air purifiers, but to not lose sight of the daily diet and exercise habits that will have a much bigger role in their long-term health.