Bridging the Gap, One Car at A Time 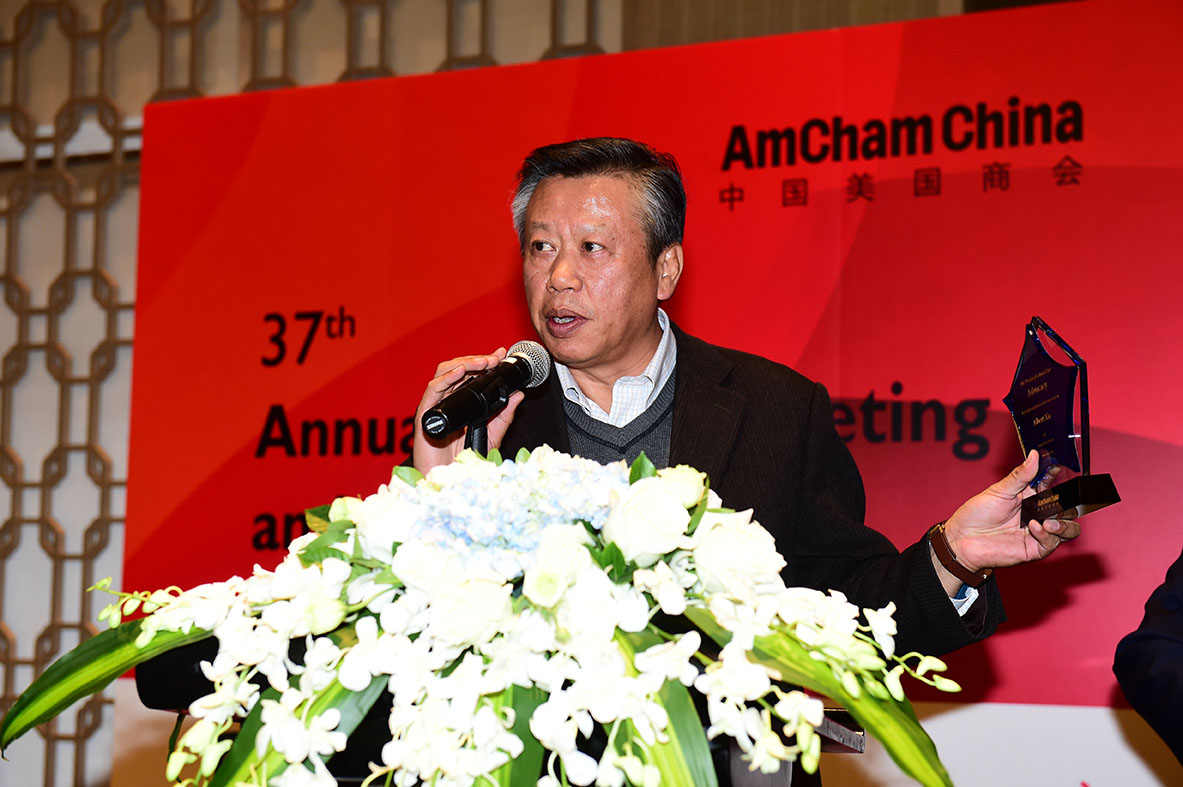 Please outline your career to date.

Albert Xie: I come from fairly humble beginnings. I started my career as an instructor at the Civil Aviation University in Tianjin, then worked at GE Aviation, and I’ve been with GM China for six and a half years. All my educational background has been in China, and I’ve never lived outside the country for long.

How long have you been connected to AmCham China, either as a member or board member?

Albert Xie: I’ve been engaged with AmCham China long before I joined GM. I spent 17 years working for GE Aviation and was a founding member of the US-China Aviation Cooperation Program [one of AmCham China’s four cooperative programs] in 2004. That was a very good platform to facilitate collaboration among industry players on common issues and was very influential in addressing key industry issues. I didn’t think I would ever be a board member, because I thought that AmCham China was more for Americans, and not for Chinese. But then I realized I could speak more on behalf of our Chinese members – this is now my fourth consecutive year as a board member. I’m also the co-chair of the Chamber’s Automotive Forum.

What are some of the ways in which you engage as a board member?

Albert Xie: We talk about common policy issues and discuss how we can better serve US companies invested in China to be more profitable and sustainable, to better understand Chinese policies, and to promote advocacy. I participated in many White Paper delivery meetings [with Chinese government officials] alongside other board members to discuss a variety of issues that US companies are facing in China. I have learned a lot from the other board members, which has been very helpful. It is great to serve our members, but I’ve also learned a lot myself and become a better leader.

Our board members come from different industries and have different backgrounds. I’ve never lived in the US, so when we talk about the current US-China relationship, other board members have a deeper understanding of the US perspective and how politicians there think. Conversely, as a board member, I’m able to take part in meetings with US Embassy officials to explain and update policies from more of a Chinese perspective, so that has proved very helpful in both ways.

Can you share any stories about how your involvement in AmCham China has directly helped one or more members?

Albert Xie: In the auto industry, there is a long value chain and a long lead time for production. More often than not, we want to have transparent policies to aid with our planning. In the Automotive Forum, we discussed China’s new emissions standards, as the standards were raised last year. However, the new policy did not provide enough lead time for companies to react. We discussed as a group and through AmCham China, we reflected these comments from our industry to the relevant government agency and industry associations. Fortunately, our voice was heard. The government then allowed us a longer lead time by six months, which was very significant and helped us fully prepare for production.

The composition of the AmCham China membership has become much more diverse over the years, with now more than 50% of our card-holding members estimated to be Chinese nationals. How important is it for the board composition to be equally diverse and how does that diversity help AmCham carry out its mission?

Albert Xie: It is a positive and encouraging fact that more card-holding members are non-US citizens. This trend represents the influence of the US-China relationship and shows that US companies are deeply invested in China and are becoming part of the Chinese economy. I like that the Board is well represented with diverse cultural backgrounds. This year, we have four Chinese board members. We are able to read between the lines and better understand certain messages. A multicultural background is important. The concept of globalization is facing some challenges, but AmCham China is a good example of people from varied backgrounds working together.

What does AmCham China mean to you and how would you like to see the organization develop in the future?

Albert Xie: I always think about one question – how can AmCham China better represent its members,  rather than just represent the board members and their companies? Of course, some people engage more and will therefore likely get more out of it. One measurement is to see how engaged and involved members are in AmCham. How many members are asking for AmCham’s help and support? The more questions we receive from the members, the better our member engagement, which shows that what AmCham is doing is related to members’ interests and benefits. The more AmCham serves its members, the more support it will get from its members, and the more people and companies will join AmCham in the future.

What do you see as the most crucial aspects of the US-China business relationship? What are you most optimistic and pessimistic about today?

Albert Xie: I look at this from two aspects. Firstly, I’m more pessimistic for the short term, because this is the year of the US Presidential Election. We know that the next 5+ months will be tough because, during the election period, people will use China as one of the topics to attract attention – it’s always been like that. But I feel very optimistic about the long term because China is such a huge country and there is huge potential for market development with so many US companies deeply invested in China. These companies provide quality jobs in China, generate a decent portion of the tax for the Chinese government, deliver products for Chinese consumers, and are part of the overall Chinese society.

From the beginning of my time with AmCham and having the chance to talk with Chinese government officials, I was advocating them that they should always think about those US companies as Chinese companies. There’s a term in China about “foreign company policies”. This eventually should be changed. Once you register here in China, you follow all the rules and regulations, and you’re now [considered] a Chinese company. China should treat all companies the same, just as Chinese companies should be treated as equals to local companies elsewhere.

What do you believe is necessary for a mutually-beneficial relationship between the US and China?

Albert Xie: There should be more governmental dialogue between the two countries. There are a lot of potential opportunities that could be beneficial for both countries. But only through the dialogue and conversations can we find solutions. I would like to see a more constructive and sustainable US-China relationship. I believe that is in the fundamental interests of both countries.

We could create more opportunities to bring more Chinese government officials in to talk to our members and have US government officials come in and talk to our industry leaders. The two governments could also discuss similar issues and present different views on the same topic via our platform. I have the general feeling that Chinese officials have a better understanding of the US than US officials have about China, especially those in Congress. For example, there are more Chinese people learning English than there are American people learning Chinese. When you learn the language, you learn the culture.

Talk about the auto industry in the context of US-China relations. The industry’s joint venture model could be seen as controversial in other countries, but in some ways, it’s a great example of the two sides working together for mutual benefit. How do you view this?

Albert Xie: I see the joint venture model as unique to China, but over the decades, we have seen the Chinese auto industry develop very fast and very dramatically. The number of people driving cars is growing much faster than anywhere else. So, this joint venture structure brings in a huge market opportunity for foreign companies, and, at the same time, helps to develop the automobile market. Chinese local OEMs developed very quickly over the same period. Considering the history, these joint ventures have really benefitted both China and foreign countries. As for the future of the JV model, I don’t know the answer to that right now. The Chinese government is currently promoting a market approach, so let’s see how that goes.

What are some of the key trends in the automotive industry in China that GM is paying attention to and/or excited about?

Albert Xie: This is a transitional period in the auto industry. Our CEO has said that over the next five years, we’ll see more technology usage than we’ve seen over the past 50 years. EVs, autonomous driving, smart vehicles – those are the new changes. Consumer habits could also be changing. Consumers used to want to own cars, but now perhaps they will start car sharing more. There will be lots of changes, and it’s a very interesting time, particularly with regard to the environmental consciousness for many people. This is a time of change. A battery engine vehicle is very different from a combustion engine vehicle, so GM is putting a lot of focus on, and investment into, NEVs and smart vehicles.

How is GM adjusting its strategy and operating procedures to cope with the changing times – both to keep up with industry trends and in today’s post-COVID world?

There is also lots of attention to the overall economy, especially on consumer behavior. We saw that auto sales in March improved versus those in February. We saw a better recovery in April than we did in March, but May was fairly flat. Given the overall economic impact, consumers may choose to postpone their purchases. Maybe some of them will scrap their earlier plans to buy a new car altogether. We are watching this dynamic closely and adjusting our production accordingly. But overall, I think China still has great potential in this market and we’re optimistic for the long run.

This article was originally published in the Issue 2, 2020 edition of the AmCham China Quarterly, an executive-targeted periodical focused on policy, business, and technology, driven by C-suite perspectives and insights. To subscribe or contribute to the Quarterly, contact our editor: mdreyer@amchamchina.org.