Celebrating and Reflecting During the 39th AGM 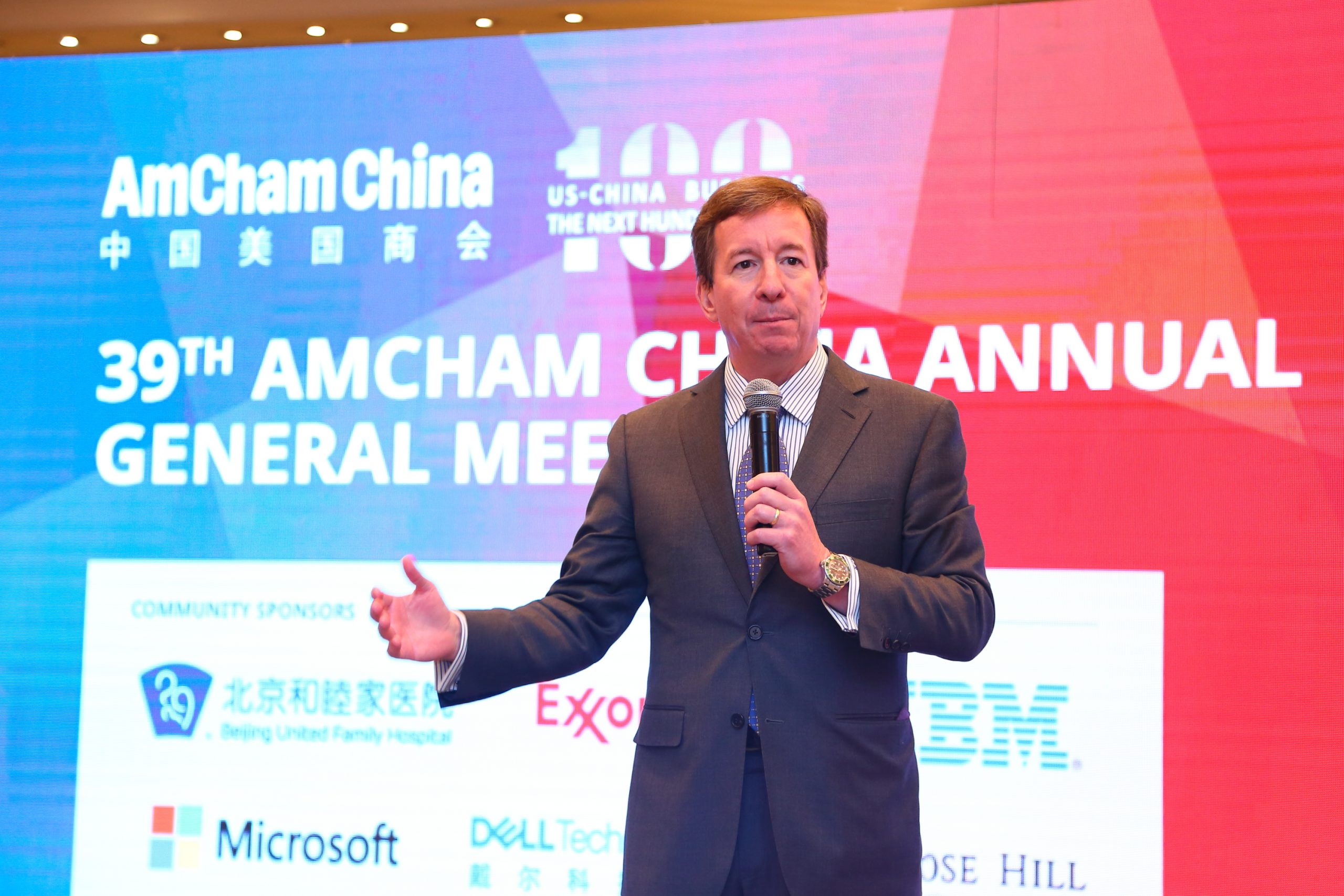 On November 19, 2020, AmCham China held another successful, sold-out Annual General Meeting (AGM) at the China World Hotel in Beijing. The event featured speeches from the AmCham China President and Chairman, an Awards Ceremony to recognize the achievements of AmCham China members and Forums & Committees, as well as short stump speeches from the prospective 2021 Board of Governor candidates.

Greg Gilligan, Chairman of AmCham China, kicked off the evening with a impactful and heart-warming speech that centered around the idea of community, strength, and influence. Gilligan explained that “the AmCham China community has, during hard times, come together as a community, which is marvelous. We have formed a community that has gone way beyond commerce and have helped each other through these difficult times.” He continued by saying “We are also, as an organization, in a place of more influence, relevance, and impact than ever before,” emphasizing that “because of COVID, the trade war, and tensions between US and China, our organization is more important than ever. What we do is extremely impactful to the US-China relationship.”

Gilligan (pictured below) went on to remember AmCham China’s successes throughout 2020, highlighting the Chamber’s charter flight, which brought member company employees, and their families safely back to China from the US, as well as the Social Impact Initiative, which was launched in early 2020 to give voices to public health and MSMEs to drive real change in these two important areas in China.

The Pioneer Award, which recognizes those who have made significant contributions to the US-China relationship, was presented to Jim McGregor. Chairman of APCO Worldwide, Greater China, McGregor specializes in advising on business, public policy and communications strategies for multinationals. He has lived in China for three decades, and was the 1996 Chairman of AmCham China.

McGregor, who joined the AGM online from his cabin in Minnesota (see picture below), thanked AmCham China for the prestigious award, and reflected on stories he has had with the organization since the mid-1990s. He touched on his experience joining the Chamber while he was The Wall Street Journal’s bureau chief, helping the International School of Beijing to push back roadblocks in order to build their school, Washington D.C. doorknocks, and more. Overall, McGregor thanked AmCham China and the many people he learned from along the way, promising that he will be back in China once COVID-19 is over.

The Chairman Award was presented to Gloria Xu (pictured below), the General Manager for Government Affairs at Dow Chemical, responsible for the company’s policy advocacy and government engagement in the region. Prior to joining Dow, she led the China government affairs functions at DuPont and Standard Chartered Bank for over 10 years with rich experiences in policy development and regulatory issues. Xu is currently the Vice Chairman of AmCham China, having served on the Board for four consecutive years, and previously served as Chair of AmCham China’s China Government Affairs Committee. Her commitment to the Chamber, her many years of service, as well as her continued engagement on the board were all reasons why Xu received this prestigious award.

The Service Award was presented by Alan Beebe, President of AmCham China, and awarded to three AmCham China staff members, Joan Zhu, Lina Wang, and Li Lu, a first in the organization’s history. These three women, Beebe explained, were critical to addressing the risks and challenges of COVID-19 from an early stage in order to ensure that AmCham China could provide adequate support to their members. Joan Zhu is the Central China Chapter Manager, Lina Wang is the Central China Business Development Assistant, and Li Lu is a Forum Committee Associate at the Beijing office who supports the Healthcare working group. Each award recipient expressed their gratitude to AmCham China, and reflected on their work in the early stages of the COVID-19 outbreak.

Finally, the Board of Governor candidates gave three-minute stump speeches, stating their commitments to promoting member needs, and sharing what actions they would take should they be elected in 2021. Candidates who attended the AGM or dialed in remotely included Zening Ge, Greg Gilligan, Roberta Lipson, Jian Lu, Jeffrey Que, Colm Rafferty, Travis Tanner, Helena Xiao, Erin Zhang, and Kenneth Zhou.

AmCham China would like to thank all attendees for coming together to celebrate and reflect on 2020 during another successful Annual General Meeting, as well as to the evening's sponsors: Dell Technologies, ExxonMobil, IBM, Microsoft, Beijing United Family Hospital, and Penrose Hill.