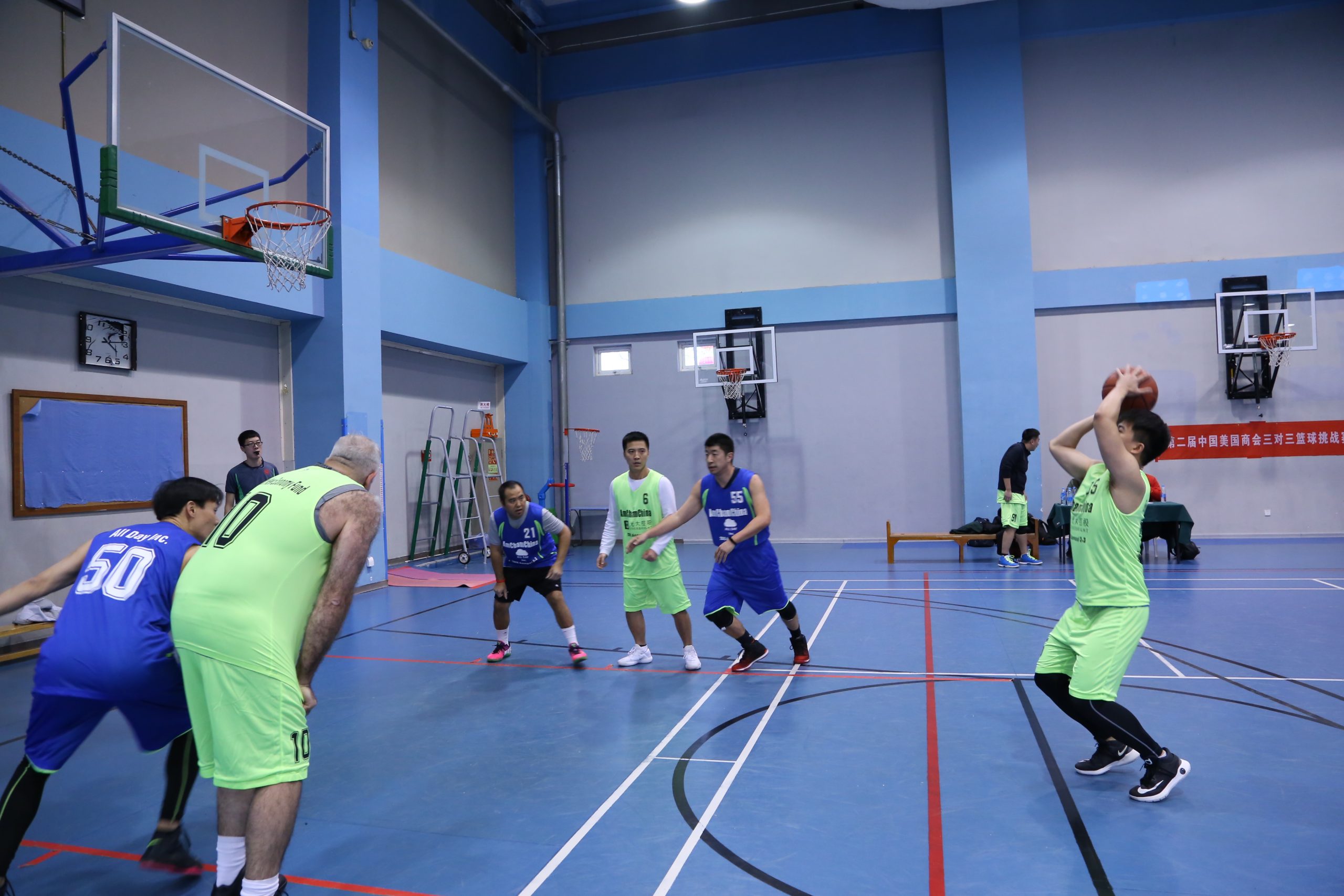 This year’s 3×3 Men’s Basketball Tournament ended in a dramatic overtime final victory for a newcomer over last year’s champions. Held Feb. 3 at Beijing City International School, this was the second 3×3 tournament hosted by the AmCham China Sports Committee following an inaugural event in November 2016. The field grew from eight teams to 12 this time around, with participation open to members and non-members alike. The tournament brought together close to 70 players representing over 15 companies from around Beijing.

Commissioner of this year’s tournament, Dan Redford of Fullreach China, kicked off the event in the morning, opening the floor to Ogilvy Asia Pacific CEO and last year’s AmCham Pioneer Award winner Scott Kronick to say a few words. Teams then began by playing a few warm-up friendly matches before getting into the elimination tournament. In a March Madness-style format, teams that kept winning moved on towards the championship rounds, while losing teams continued to play on through a consolation bracket.

The event culminated in a dramatic final game between the 2016 champion, NBA China, and newcomer to the tournament, Team SPEEDSTAR. Ten minutes would not be enough for these two teams, and the game went into overtime. The overtime period rules granted victory to the first team to reach two points. After a bit of back-and-forth, it was Team SPEEDSTAR that overpowered NBA China to make two hard-earned buckets to claim the championship. Other awards were given to the 3rd place team, WeSport, as well as the Consolation Tournament winner, Team All Day. After the event, participants and audience members gathered at Jing A Brewpub to have a few drinks and enjoy some fellowship. While the day featured some fierce competition, it also accomplished its main goal of bringing business people in Beijing together to get some exercise and build camaraderie.

3×3 basketball is becoming one of the fastest growing sports categories in the world. Last year, the International Olympic Committee announced that 3×3 basketball would be added as an official event to the 2020 Tokyo Olympics. FIBA operates a very robust professional international 3×3 tournament series, with literally thousands of games and events taking place around the world year-round, and now many of these players are setting their sites to train to become Olympians in this new category. The Chinese market has certainly caught the buzz of 3×3 as well. The Chinese Basketball Association has been running its own national 3×3 tournament for several years. Web giant Sina.com has also launched its own FIBA-certified national 3×3 tournament, the Sina Golden League, which is now entering its fourth year.

The AmCham Sports Committee is proud that its offline competitive event series continues to grow and improve. Not only did the tournament field grow this year, but also the level of play and professionalism seemed to pick up as well. The committee has hopes to add new activities to future 3×3 tournaments, such as bringing in entertainment performances, activities for families, and media partnerships. The calendar of events for 2018 is also expanding from prior years. The next competition will be badminton, with tennis, golf, and perhaps others to be added later in the year. Stay tuned for more information!

Dan Redford is the Co-Founder and Managing Director of Fullreach China, a sports digital marketing firm, and member of the AmCham Sports Committee.