Driving Toward the Future in China

You are here:
Industry  NewsTech and Innovation InitiativeWorking Groups 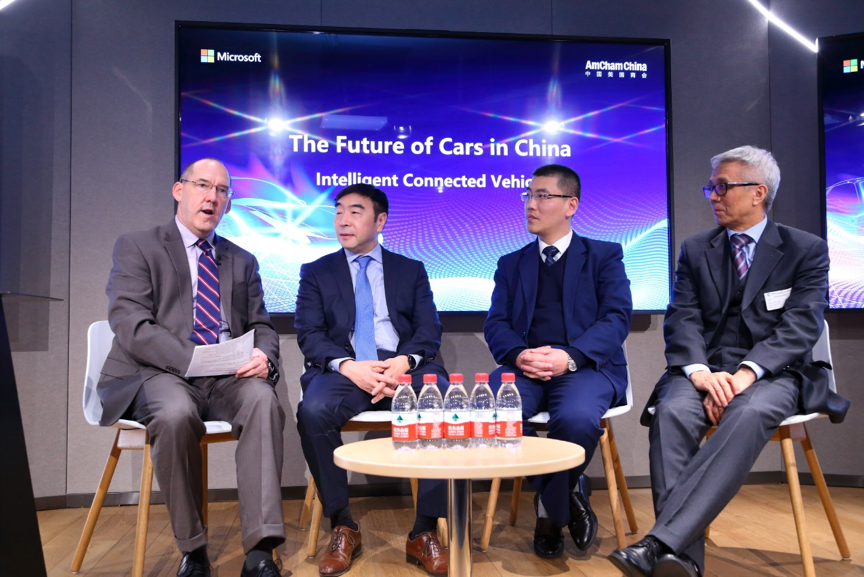 AmCham China and Microsoft partnered to co-host a high-level event on The Future of Cars in China: Intelligent Connected Vehicles. Over 50 senior executives from AmCham China’s Automotive Forum and Information and Communications Technology Forum working groups participated. During the meeting, leaders from both the ICT and Automotive industries shared their insights regarding the digital transformation of the auto industry, China’s cybersecurity law and other relevant regulations and policies, and visited Microsoft China’s Center One space where we experienced developing technologies including the HoloLens VR headset and interactive big data GPS mapping.

Technology Trends in the Automotive Industry

“Humans have been driving cars for over 150 years without a reliable method to capture the valuable metrics and other data that inexorably flows out” said Roan Kang, Microsoft’s Greater China Region Vice President. “Today however, we have designed systems to capture, process, and analyze every bit of that data and Microsoft is putting it to good work to learn and improve products and processes.”

The so-called Fourth Industrial revolution – the convergence of the physical world with digital technologies – will be powered by big data. The intelligent connected vehicle (ICV) including interconnected smart cars and electric vehicles, will change the future of personal transportation. This new technology is coming to China and AmCham China member companies are leading the way in technological development. From artificial intelligence to augmented and virtual reality, auto companies are employing emerging technology in vehicles to improve the driving experience.

Development of the ICV industry is a major priority for the Chinese government:

Nevertheless, significant challenges and policy barriers to the development and implementation of ICV’s remain. This is especially true for foreign companies operating in the current Chinese regulatory environment.

While the overall vision for the development of the ICV industry in China is clear, the role for foreign-invested enterprises is less optimistic. For the past 40 years, investment into China by foreign original equipment manufacturers (OEMs) remains capped at 50%, forcing foreign automotive companies to partner via joint venture JVs with local Chinese companies to gain market access.

However, others argue that there is still a silver lining to China’s ICV industry. During the panel discussion portion of the program, Yu Su, Ford Motor’s IT Director, and Dr. Jie Li, Jaguar Land Rover’s Executive Vice President of Government Affairs and Alliance Office shared that compared to ten years ago, China is progressing towards openness a that foreign OEMs believe they can use technology to overcome policy barriers.

There is little doubt that the future of transportation is changing as technology continues to develop. Attendees were introduced to GM’s Super Cruise semi-autonomous steering that enables drivers to take their hands off the wheel, granting autonomy to the vehicle to drive itself on a highway.

Christopher Millward, President and Managing Director of the United States Information Technology Office (USITO) noted that to maximize the impact of further developments, automotive companies must develop open technology, the Chinese government must listen to the voice of industry and provide a platform for collaboration where “information and communications technologies are built into the foundation.”

All the participants believed that AmCham China will still be an important platform for the industry to be heard. ‘Let’s work together,’ said by Albert Xie, ‘and through AmCham China to work with Chinese governments, let our voices to be heard.’

Jenny Chen is the AmCham China staff coordinator for the Automotive Forum and can be contacted at jchen@amchachina.org

Evan Schmitt is AmCham China’s coordinator for the Information and Communication Technology Forum and can be reached at eschmitt@amchamchina.org