Drones on the Move in China

You are here:
IssuesNewsTech and Innovation Initiative 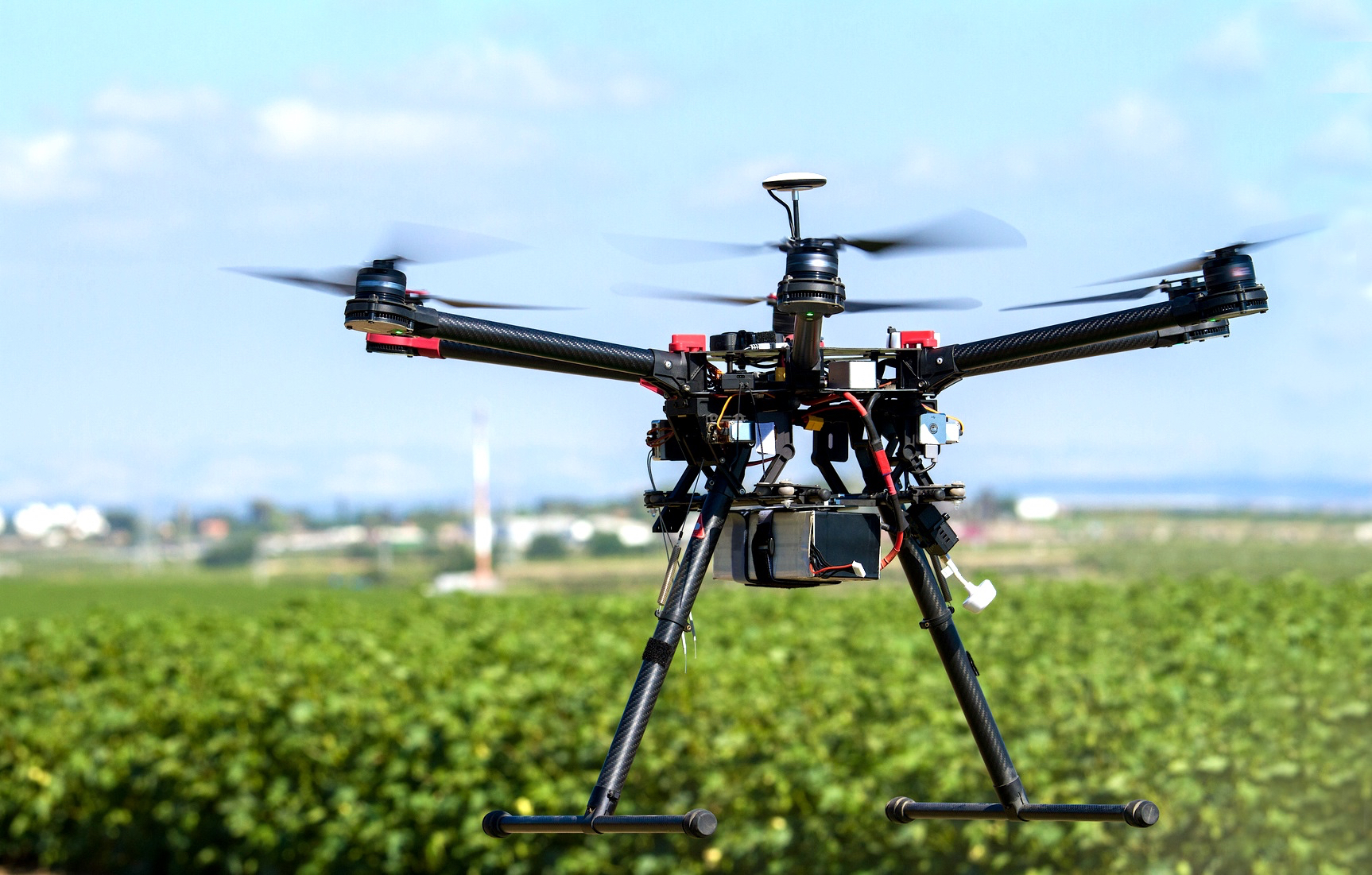 This year’s annual Spring Festival Gala in China, a massive multi-city variety show held on the eve of the lunar New Year that regularly draws hundreds of millions of viewers, featured a performance that gave a clear indication of where innovation in China is heading. While famed Chinese pop singer Sun Nan sang “冲向巅峰 (Toward the Peak)” – a high-energy pop anthem whose lyrics speak of dreams of glory and bravely charging toward the future – a team of 540 robots performed a two-and-a-half-minute synchronized dance routine. Set against the backdrop of Guangzhou’s Canton Tower and amidst a hypnotic laser show, the robots gyrated back and forth, never breaking unison. Toward the end of the song, 29 neon-lit drones appeared overhead, raining streams of sparkling confetti upon the artificial dancers. All in all, the performance gave a distinct impression of China’s rapid embrace of new technology and the push for increased innovation moving forward.

“The consumer drone market is expected to soar in the next few years,” said Qualcomm’s Head of Research in China, Jilei Hou. Qualcomm, who has partnered with Chinese UAV manufacturer Zerotech and Chinese Internet giant Tencent to create what Hou called “smaller, smarter drones that deliver real-time content to China’s largest social media network,” is among a current wave of US companies getting involved in the drone market in China.

Not only are commercial drone sales surging around the world, but China has quickly established itself at the forefront of this technology. A recent report by DroneLife.com found that five of the top 11 venture capital-funded drone companies globally reside in China. Meanwhile, China’s DJI has become the world’s top producer of commercial drones for a wide range of applications.

While Chinese companies have emerged as global leaders in terms of drone production, partnerships with foreign companies aimed at integrating diverse technologies has become increasingly common. Qualcomm’s partnership includes putting its mobile and processing powers to use to stream video from a drone directly to QQ or Wechat. Intel, meanwhile, has been collaborating with Chinese drone manufacturer Yuneec, who unveiled a new drone at this year’s Consumer Electronics Show that makes use of Intel’s 3D camera technology. Speaking at the convention, Intel CEO Brian Krzanich referred to the drone, which is capable of following its owner on a bicycle ride and avoiding obstacles such as trees and telephone lines, as "the world's first truly intelligent consumer drone."

As drone technology improves, businesses have been finding much more diverse uses for the devices. Commercial drones have long been talked about in terms of delivery, with Amazon in the US and SF Express in China launching private delivery drone tests in 2013. In early 2015, Alibaba’s Taobao teamed up with Shanghai YTO Express to conduct a three-day public test. But these efforts have been hampered by safety and security issues as well as regulations regarding the widespread use of unmanned aerial vehicles in urban conditions, including the banning of drone deliveries in densely populated areas in China in late 2015. But commercial drones have much more widespread applications, and are increasingly being used to reshape a wide array of industries ranging from agriculture to construction to media, and are also making significant contributions to disaster relief situations.

Agriculture is among the industries poised to be most significantly impacted by drones, especially in China. In addition to imaging and data-gathering applications, which seek to improve productivity and minimize potential sources of waste, drones in China are increasingly being used to apply fertilizers and pesticides. In contrast to the US, where agriculture tends to be dominated by large-scale farming on massive, flat areas that are suitable for airplane-based crop dusting, farming in China incorporates a significant number of smaller operations, many of which are located on mountainous or difficult terrain and sometimes include a more diverse array of crops. These conditions increase the practical and economic benefits of drone applications. Furthermore, such rural applications lack the safety and security concerns of urban environments, thus avoiding the strict regulatory issues faced by some other drone uses.

Zachary Gidwitz, Head of Global Supply and Co-Founder of AgVali, a company that focuses on agricultural technology, sees drones as the future of agriculture in China for two reasons: China is already leading the world in drone manufacturing (Gidwitz refers to DJI as “the Apple of drones”), and the economics involved just make sense. Because of the difficult terrain involved with many farming areas in China, larger state-run operations often use helicopters for spraying pesticides and fertilizers. According to a report by Smart Agriculture Analytics, drones can spray up to 600-800 mu (a Chinese unit of measure, roughly 100-130 acres) in a day, and can operate for as little as 40 percent of the cost. Furthermore, Gidwitz said drones are 10-15 times more effective than manual labor, which is still common in many areas, and a new DJI agricultural drone released late last year can be up to 40 times more effective.

Local governments in China appear to be supporting these types of drone applications, with at least three provincial governments – Henan, Zhejiang and Hubei – offering some sort of subsidies for agricultural drone use, including training sessions, licensing assistance and financial reimbursement.

As drone technology improves and continues to integrate with other technologies, the results are not only fascinating, but are likely to dramatically impact a wide range of industries. Commercial drones are already being widely used for their camera and imaging capabilities, for purposes such as building inspections during construction (for hard-to-reach structures such as skyscrapers and bridges), advertising for real estate and tourism, data gathering for agriculture, resource extraction, infrastructure construction (such as highways and railways), urban planning and a wide range of media applications such as filmmaking and sports coverage. While all of these uses have provided interesting new opportunities and ways to improve existing industries, the potential to create new and almost unbelievable purposes for drones is increasingly becoming very real.

In January, Chinese drone manufacturer Ehang unveiled its first passenger drone, called a personal flying vehicle (PFV). Though still in the prototype stages, Ehang’s PFV is capable of flying a single human for 23 minutes and at speeds up to 60 miles per hour (nearly 100 kilometers per hour). Furthermore, it operates autonomously, with the passenger simply entering a destination through their smartphone, and the drone then creating a flight path and following it.

Disaster relief offers another area where drones are already making a significant impact and are poised to do much more. Drones were used to survey damage after the Taiwan earthquake in February, and also to locate survivors in the Philippines after Typhoon Haiyan in 2013 and in south China in 2014 following the Ludian earthquake. Aid organizations are increasingly deploying drones for this purpose. But here, too, drones are pushing the boundaries of what was once thought possible. A recently launched research project in London seeks to equip drones with 3D printing technology for the purpose of building temporary shelters for people stranded in difficult-to-reach environments. These drones would be capable of autonomously assessing their environment and then designing and building an appropriate shelter on the spot, offering protection until rescuers can arrive.

Many challenges still remain before drones are capable of achieving some of the loftier ambitions set out for them. For agricultural purposes, the two most significant – the initial purchase cost of the drone and the training required for rural farmers to operate such a device – are at least in some capacity beginning to be addressed in China through subsidies. Other challenges come from the drones themselves, namely the battery life and carrying capacity necessary to cover larger amounts of territory and carry bigger payloads.

Biman Najika Liyanage, a drone expert at the Beihang Remote Sensing and Radar Imaging Laboratory, said that battery life presents the biggest challenge, as it is greatly reduced when even a small payload is attached to the drone. But he also added that “the most interesting thing is that in the near future, all of these things can be solved.”

The proliferation of commercial drones is already occurring at a significant rate, and as technology continues to improve and the uses for drones continue to multiply, this expansion appears to be set for an extended period of rapid growth. As demonstrated by Qualcomm and Intel, this growth offers a prime environment to seek out creative ways to integrate existing technology with emerging drone capabilities. Western companies who specialize in camera, wireless and other such technologies have already been capitalizing on this trend, but as can be seen through the promise of such exciting prospects as remote building and passenger drones, the potential uses of commercial drones are endless. While 29 synchronized drones flying over the hundreds of dancing robots at China’s New Year’s Gala this year may have seemed little more than a gimmick to some, it can also be interpreted another way – as a statement from a country pushing hard to transform its desire for innovation into a reality.

Doug Strub contributed this piece as an AmCham China Intern.