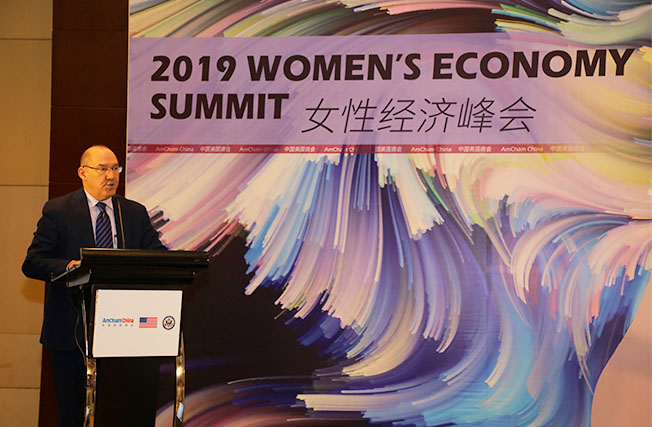 AmCham China’s “Expanding the Conversation” series continued on April 10 with a fascinating and detailed look at women’s issues within the economy. A packed afternoon of keynote speeches, panel sessions, and workshops had plenty of practical takeaways for everyone, and, importantly, left the hundreds in attendance keen to continue the discussion in their respective places of work.

AmCham China President Alan Beebe (pictured above) began lunchtime proceedings at the Beijing Marriott Hotel Northeast, by noting the key aspect of the shared vision between the US and China that allows the dual economies to flourish – namely, that there is no economic success without women empowered to lead that success. Highlighting the support from the U.S. Embassy’s public diplomacy outreach efforts, Beebe outlined the efforts to bring together not just women from AmCham China’s traditional constituency of corporate entities, but members of the Chinese female community to be part of this expanded conversation. He warmly welcomed all attendees into the extended AmCham China family, encouraging those present to continue examining how best to collectively grow the women economy.

Benjamin Sand (pictured above), the Assistant Cultural Affairs Officer from the U.S. Embassy’s Public Affairs Section in Beijing, then took to the stage, saying, “In the US, the commitment to equality and diversity is a core essential value. To us, that’s a global norm, and a globally recognized human right. But what’s the best way to address these issues here? What we’re looking to do is to create spaces where we can listen and interact with our Chinese hosts, and we’re very keen that this conversation continues long into the future.”

Sand echoed comments from the U.S. Embassy’s Deputy Chief of Mission, Robert Forden (pictured above), who had spoken earlier in the day at the Women’s Economy Summit, where he stressed the importance of empowering women and girls, and highlighted US government support for female leaders and entrepreneurs. “Gender equality is a core American value, and the United States will continue to support programs to close the gap,” Forden said.

As attendees enjoyed their lunch, Holley M. Kholi-Murchison (pictured below), Founder of both Oratory Glory and HOLI. Brands, then spoke to the crowd about the importance of embracing one’s true self by sourcing internal values to craft an honest, compelling personal narrative, using that narrative to initiate more meaningful conversations, and cultivating and sustaining the confidence to propel ideas to action.

Under Kholi-Murchison’s instruction, audience members paired up to tell each other first favorite memories and then personal achievements, pointing out the difference between the two types of storytelling. During her short talk – which was based on her book Tell Me About Yourself – she explained how highlighting your own career highlights to others shouldn’t be seen as bragging, but rather as a way to connect the dots in one’s life story, especially given that many people have an increasingly complex resume in today’s more fragmented workplace.

Ji Gu, CEO and Dean of Zhen Academy, then explained the importance of a transferable skill set, detailing how she had transitioned from an investment banker to a portfolio manager to a game producer to the COO of an AI company and finally to an educator over the past decade. Founded in 2017, her Academy focuses on helping entrepreneurs improve their self-awareness and avoid repetitive mistakes in decision making, and Ji has quickly become something of a star among young Chinese women, with 2.5 million followers on short-form video platform Douyin.

After lunch, attendees were offered a choice of three breakout sessions. In the first room, Cindy Jensen, an executive coach and Founder of INPOWER ONE, moderated a panel on women’s health and its cascading impact, asking if companies in China pay adequate attention to cover women’s health and addressing the impact of healthy women on creating healthy families, communities, and economies as a whole.

Jenny Yang, VP at United Family Healthcare, noted that there is a greater demand today for primary care and behavioral health for children, but also the growing need for services on issues such as diabetes and weight management that simply weren’t necessary 20 years ago. Jennifer Chisholm, a family doctor at the Raffles medical clinic in Beijing, shared her experience that many more Chinese women today are looking to have cervical cancer protection screening and receive the HPV vaccine, highlighting a dramatic change in the knowledge and awareness about this issue.

Jackie Gao, a nutrition consultant  at Beijing United Family Hospital revealed a change in focus from acute to chronic illnesses, with stress and diabetes coming to the fore in recent years, as more people in China look to become healthier, through better cooking, eating, and weight management, while also focusing more on family care. Jaclyn Dam-Laute, CEO of IDC Dental, spoke about the distinction between evidence based medicine versus other kinds of diagnoses, saying that, with the deluge of information available on the internet, the most important job for medical professionals is to help sort through all of the information, with the educational side of things being the most critical.

Next door, Holley Kholi-Murchison delivered a more hands-on session from her earlier keynote, during which she spoke about how best to execute an idea. “It’s okay to have lots of ideas, but some of us are experiencing decision fatigue, so which ones do you do something about?” In a fast-evolving world driven by innovation and technology, she said that cultivating the skills of an entrepreneur is one of the keys to being able to effectively create change. “Talk about your idea. A lot of people keep their ideas secret, which makes it hard to get it out into the world. No one is going to take your idea and execute it in the exact same way you would. Go for it!” Kholi-Murchison encouraged.

In the third parallel session, executive coach and trainer Gao Lin, who is also the CEO of Message Coach, addressed an important aspect of career development by talking about how to build an effective professional network. Gao stressed that in all networks, there should be teachers, mentors, and coaches. However, she referenced a study showing that while 17% of male professionals asked for help from a mentor, only 4% of female respondents indicated they had reached out, meaning that it is far less likely that females advance their career through the help of a mentor. Gao’s workshop then focused on what makes an effective network and showed attendees how to find their teacher and mentor.

After a short break, a second set of breakout sessions offered another wide variety of practical tips and hands-on development. Caneisha Berry (pictured above), Founder of Berry Thoughtful Life Coaching, began with an impromptu dance session to set a more relaxed mood, before outlining different ways to overcome stress. Defining stress as Situations that release emergency signals and stimulus, Berry said that all of our emotions are signals for us to do something different to change the way we are feeling. “If you can take ownership of that fact, you can become empowered to make a different choice. Stress is just a thought produced by fear,” explained Berry. She then outlined several steps to overcoming stress, including correctly identifying your feelings of fear or stress, challenging those thoughts, and reframing those thoughts into something more positive.

Meanwhile, Hubert Lin (pictured above), Co-founder of Message Coach, outlined how best to stand out through personal branding. Building on some of the previous speakers’ points, Lin stressed the importance of storytelling for one’s personal brand, whether you are posting online or networking in person. More specifically, he detailed how to script a personal story that resonates with others, and how to tell these stories with authenticity and depth. Attendees were divided into groups to try out his methods, with Lin then offering constructive feedback.

Finally, Diane Ho (pictured below), Founder of Transcend Beyond, spoke about the many unconscious biases that pervade our thinking, and ends up ruling our behavior in many cases. As one of several examples shared, Ho explained that in the US, just 10% of spots in professional orchestras use to be filled by women, because male musicians were perceived to be more capable than their female counterparts, and this bias was confirmed at auditions. But when orchestras started to do these auditions behind screens, the percentage of women securing spots shot up to 40%. In the workshop, which also included a number of group exercises, Ho shared how to first identify our many biases, before raising awareness and finally overcoming them in a bid to make the workplace more inclusive.

All in all, it was an enormously useful event, with many attendees inspired to discuss what they had learnt during a lively networking session after the workshops had concluded.