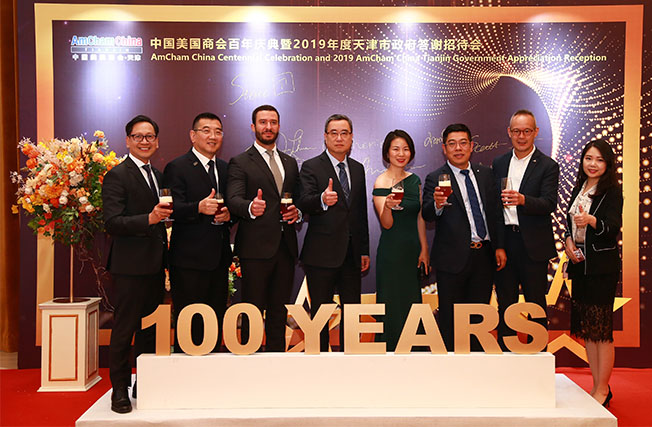 On May 23, AmCham China, Tianjin invited Vice Mayor Jin Xiangjun for a discussion with an AmCham China member company delegation about how current levels of engagement and support can be strengthened between the local government and American businesses operating in Tianjin.

The AmCham China delegation was headed by Tim Stratford and Martin Winchell, Chairman of AmCham China and AmCham China, Tianjin, respectively. During the dialogue, Stratford presented Vice Mayor Jin with AmCham China’s 2019 American Business in China White Paper, which gives a sector-by-sector analysis of the business environment and challenges American businesses face in China. It is important to note that the meeting between the two delegations went well beyond discussing challenges and policy recommendations. Equally important to the Chamber was the opportunity to express its sincere gratitude to the local government for its continued support in making Tianjin one of the hospitable environments for American businesses in China.

Following the delegation’s meeting with Vice Mayor Jin Xiangjun, AmCham China, Tianjin held its Centennial Celebration and 2019 AmCham China Tianjin Government Appreciation Reception at the Four Seasons Hotel Tianjin to mark the 100-year history of AmCham China and to express deep gratitude for the support of Tianjin Government. During the event, U.S. Embassy representative, Matthew Murray, Minister Counselor for Economic Affairs of US Embassy in Beijing, expressed his hope for the continued improvement of U.S-China relations.

The success of the government appreciation dinner would not have been possible without the support of its sponsors. AmCham China, Tianjin would like to take this opportunity to thank iKang, Tianjin Juilliard, United Family Healthcare, Air Canada, PPG, JLL, Schneider Logistics, Marriott Group, Admiral Farragut Academy, AstraZeneca, Aviation Institute of Maintenance, JLG, Nice Wedding Planner and We Brewery who each sponsored the Government Appreciation Dinner.

This event represents AmCham China, Tianjin’s most important advocacy event of the year, and its success is a measure of AmCham China’s dedication to creating a welcoming environment for all American business operating in Tianjin.