Expanding the Conversation: The Cities We Live In 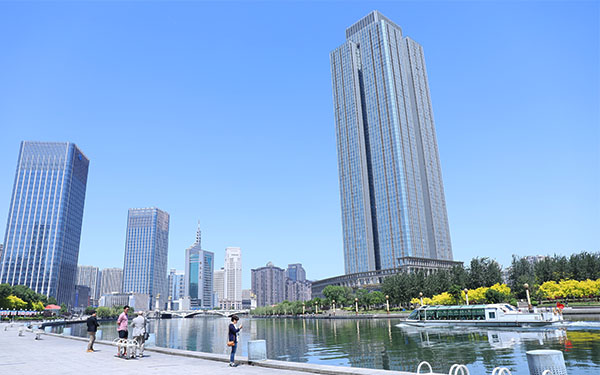 More people in China now live in urban areas than in rural parts of the country, with these expanding cities bringing many and varied benefits to their residents, including resilient infrastructure, economic opportunity, and access to public services. But growing metropolises – not to mention human activity – also produce different forms of pollution, which can endanger public health.

The increasing complexity of successfully managing urban environments was a key thread throughout AmCham China’s most recent Expanding the Conversation event in Tianjin, with topics such as collaboration amongst stakeholders, holistic solutions, community involvement, and harnessing new technologies taking center stage.

Given the importance of such an event, the Chamber was honored to host U.S. Ambassador to China Terry Branstad (pictured above) on his fifth trip to Tianjin in total, having first traveled to the city in 2013 as Governor of Iowa. One of the main aims of the event series is to create a dialogue between the US and Chinese communities, while sharing best practices and discussing how the two sides can learn from each other. To this end, Ambassador Branstad spoke about the renewable energy situation in Iowa, and how the state led the US in wind energy, ethanol, and biodiesel, all of which are designed to reduce pollution. He also talked about the huge responsibility of ensuring that cities have clean air and clean water, while acknowledging the massive challenge of growing sustainably, and protecting both the environment and people’s health – one of the most important issues facing Chinese decision makers today.

He then spoke about the importance of transparency when it comes to the environment, detailing the background to when, in 2008, the U.S. Embassy in Beijing began tweeting out hourly air quality updates at a time when there was virtually no air quality monitoring data publicly available. Amazingly, this led to widespread change not just in Beijing, but across much of China, with thousands of air monitoring stations all across the country now publishing publicly available data.

Well-known Chinese environmentalist Ma Jun, Founder and Director of the Institute of Public and Environmental Affairs (IPE), spends much of his analyzing both publicly available data, as well as data collected through his company, and works with key stakeholders to demonstrate the effectiveness of these projects. That transparency has sparked a 50% drop in pollution from 2013-2018 as measured by the U.S. Embassy, a result that has been mirrored elsewhere in China, with Ambassador Branstad saying these improvements had literally saved thousands of lives.

From left to right: Michael Hart, a member of the AmCham China Tianjin Executive Committee; Ma Jun, Founder and Director of the Institute of Public and Environmental Affairs; Qindong Liang, Vice President for Buildings and Places at AECOM.

Ma Jun also spoke about issues with soil and water pollution, describing how massive industrialization and urbanization had resulted in some unwanted side effects. He also made the point that pollution is a regional and global problem, not merely something that can be treated as a single-country issue. But the good news is that there is now an increasing number of indices that not only track all kinds of emissions and pollutants, but also rank companies based on their environmental management effectiveness. A number of multinational firms are deeply involved in this area, with American companies providing many of the innovations that China uses to improve quality of life in Chinese cities.

One of those companies is Los Angeles-headquartered AECOM, whose Vice President for Buildings and Places, Qindong Liang, outlined the case of the Tianjin Haihe River development, for which AECOM worked closely with the Tianjin City Planning Bureau to develop overall strategic planning and an environmental master plan for the 20km Haihe River Corridor. AECOM also worked on the schematic design of the 4.9km embankment, while ensuring contemporary cultural references remained part of the new landscape.

Liang also outlined the principles of regenerating a sustainable waterfront, which include allowing citizens to live, businesses to invest, cultures to celebrate, visitors to enjoy, and nature to thrive. Those principles were perfectly illustrated by the kite flying and salsa dancing demonstrations on the waterfront that concluded the event.

Ambassador Branstad also visited the waterfront area, where he saw some Tianjin school children – chosen from both local and international schools – who had set up an art market using recyclable materials, adding to the sense of community that has been built along the river in Tianjin.

In an earlier discussion moderated by Michael Hart, a member of the AmCham China Tianjin Executive Committee and Chairman of the Chapter’s Real Estate Committee, Liang spoke about the issues involved with different stakeholders, citing the example of how the city’s water management bureau is very traditionally minded, which made modifying the riverbank very challenging, but adding that the Tianjin municipal government and their river management office had played a great role in the development of the riverbank area.

Meanwhile, Ma Jun mentioned that government ministers had initially worried that increased transparency over pollution data might have sparked social disruption, but in fact it had promoted more trust and transparency, with more violators being punished and air quality improving across the board. He also described how state broadcaster CCTV had focused on air pollution to great effect, such as programs about how to wear an air mask effectively, but urged that more could be done to educate the public about other toxic substances and the harm they do.

All agreed that Tianjin had become a much more livable city than it was in the past, thanks to the joint efforts of private and public stakeholders, but that more can always be done to harness good design, new technologies, and available data to improve infrastructure for the good of all.

AmCham China’s year-long “Expanding the Conversation” series takes place in conjunction with the US State Department and will host monthly exchange programs designed to promote interactions between the American and Chinese communities. For more information, please contact Evan Schmitt, Program Manager, at escmitt@amchamchina.org.