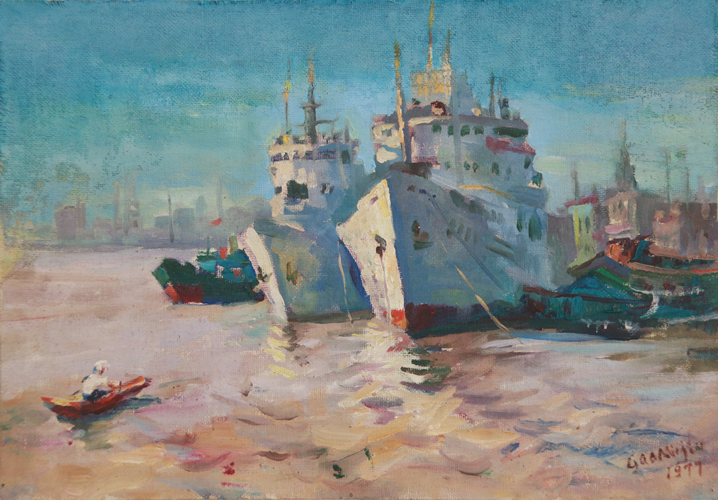 Scholar and curator Gao Minglu helped put Chinese contemporary art on the map. Before his seminal exhibitions, the global art scene knew little of what China's artists had to offer. Now, for the first time, he's sharing his own art: paintings and life drawings he created during and just after the Cultural Revolution (1966-76).

Co-sponsored by AmCham China, The Lonely Horizon – Gao Minglu during the 1970s shares landscapes and portraits from Gao's time in the grasslands of Inner Mongolia, Tibet and other remote regions. In the four decades since these he first created these works, Gao has moved across the world to study, teach and curate, earning his Ph.D at Harvard and taking on his current professorship at the University of Pittsburgh. Many of these works have been sitting in friends' garages or tucked into Gao's belongings for the better part of the last 40 years, and only uncovered by accident in recent years.

To celebrate all that Gao has done to advance Chinese contemporary art's profile around the world, Ambassador Max Baucus and AmCham China Chairman James Zimmerman will speak at the opening ceremony for the exhibition next Tuesday, June 16. AmCham China Magazine Manager Bridget Riley recently shared a few cups of tea with Gao to learn more about his past and present work.

Can you describe what you were doing when you created these paintings?

Where have these paintings been during the last 40 years?

I only brought some of the paintings with me to the US. Most I left in friends' homes. My house was originally located close to the Forbidden City, an old courtyard house actually, but then after I left for the United States, the government took it away, so I had to put all the paintings in my friends' garages. They've moved several times but are still there – it’s really really amazing.

They really make me recalls the past. I see them not only as artwork, but also as true experience, true feeling about that age, that society, that time. Friends, family and students, all encouraged me to bring that to the public to show that.

Have you continued to paint or draw since then?

The last one I painted was 1983, when I traveled to Gansu province. (During) my graduate school in the early 1980s, if I travelled, I would bring a small box to paint with. So the painting is just about this size (6-10 cm), but very easy to carry. And then I didn’t remove that, I left it in the small box of the paint set. Somehow, my wife was cleaning my stuff, and opened the box and discovered the picture inside, which hadn't been opened for more than 30 years. That is my last one. Compared to a lot of the work I did in the '70s, it is a lot more abstract. But most of my painting is still realistic.

Two months ago, the Guggenheim curator visited me in Pittsburgh, and my wife showed her my early paintings. She was very surprised and said she saw an influence of Impressionism in my landscapes. There are certain elements of Impressionism, but not directly influenced by Impressionism but through the very radical painting style I learned from Russia, the so-called Critical Realism around the early 19th century. Their style is not very much realistic, but rather more colorful more even sometime a little bit abstract, decorative. Before the cultural revolution in China, there was on the catalogue of published Russian art, so I learned a lot from the early Russian realism.

But my current work still focuses on – and I don’t want to change or shift to painting or creating art – theory, art history, curation and contemporary art criticism. I think I should still try to accomplish what I am doing.

As a curator, you place a lot of importance between a dialogue between artist and curator. What was it like to be on the other side on this dialogue?

So if you ask me the dialogue between curator and artist, (my engagement) in the '80s so different from the '70s, when I was an art teacher. During the Cultural Revolution you have paintings of soldiers and workers, always a large composition, but what I did is very small, just life drawings or landscape – nothing to do with this revolution. I travelled facing myself and my own heart and my own eye, nothing really outside. So there was no dialogue, only dialogue with yourself, and maybe sometimes talk with students, because I have to teach, but I felt very private at the time.

Doing painting is pretty much private work. I never thought that these paintings would one day be brought into a public space to show to anybody else. At that time I felt that I am just an individual, just a teacher, and I would do my best, but nothing to do with outside world.

But (in the '80s) it was suddenly different for me. I wanted to be involved in this, even to change something, as curator. At that time I thought very much about identity and about modernization in art and this kind of thing. The age changed (to) idealism.

Sometime around '84, '85, I started intensively having a lot of dialog with artists who visited my home. At that time we called them the avant-garde. We worked together and did almost everything, from writing manifestos to exhibitions and conferences. Then finally in 1989 I organized an exhibition which opened in the National Gallery. It opened four months before June 4, and two months later the student demonstration started, so that time was a sensitive moment and (the exhibition) really caused a lot of sensation in the New York Times. There were reporters but no (international) art journals; they still didn’t know what was happening in China.

I still keep idealism today and I never abandoned it, but at that certain moment, 1989, you just couldn’t do anything. I stayed home, was not allowed to write to publish, to travel, to give lectures. Just stay home study marxism, I studied – well I studied something else – but pretending to study Marxism at home.

Then later I got the invitation from the states. Actually, I never thought I wanted to go abroad because I thought it was very important that I stay together with the artists. But on the other hand I knew that (art) theory in China needed to be developed and need close dialogue with international academics.

How do you view its current status, and does contemporary art help countries understand each other more?

Now in the last 10 years, there are also certain comments and criticisms of Chinese contemporary art for being more commercial. Especially around 2006 and 2007, the price just suddenly increased to tianjia, heavenly price. It is just incredible how artists just graduated from academy can get a price equivalent to a second or third level master from the United States. This price bubble, people really worry about it, but in recent years people say that the bubble has decreased, may got more rational, but still there is a bubble.

And how does this bubble affect you?

Today it is very difficult to if you want to make something purely scholarly or academically. You really have to spend lots of energy to convince an institution to do that. The (Chinese) government is not interested in contemporary art. They are still interested in traditional painting or realistic painting.

Do you have to avoid political themes these days?

I think now is very sensitive. I organized an exhibition for the 20 year anniversary of 1989 in 2009, and I was informed in the midnight before the opening to shut down this opening, so it didn’t open. The government is very nervous especially with something related to '89.

On the other hand, because of the booming market, I think most Chinese artist now don’t pay too much attention to this political issue. Also, sometimes I think that in comparison to the '80s even compared to American artists in New York, the Chinese contemporary artist is really lucky. They have a big huge studio and even younger artists can have support from different business people so their living condition is much much better than the artists in the '80s. Art at that time didn’t have any support.

What’s your favorite place to see contemporary art in Beijing?

I actually like to go anywhere, but I don’t have a very particular place as a favorite, I like to divide my time between several centers in Beijing, for example 798, then Central Academy of Fine Art Museum, occasionally I also visit historical museums or the National Art Gallery.

What's your favorite work of art?

Tianshu (A Book From the Sky) is one of my favorite works. Also Huang Yong Ping's The History of Chinese Painting and the History of Modern Western Art Washed in the Washing Machine for Two Minutes. He put these two in the washing machine, and then he then took this junk and put it on the black box as a work. It combines traditional Chinese Buddhism and Dada together.